Across the country on Nov. 19, 2001, newspaper fronts documented a nervous nation. The rubble of 9/11. A sputtering economy. Bio-terror threats.

That was 20 years ago today. No Alabama. No Ohio State. No Clemson. No Notre Dame. Crazy list, no? Of the top 25 teams that day, how many are ranked in the poll now? Only six.

We have a tendency to view the sport as an oak tree, changing too slowly to notice. But my goodness, what the heck happened to the powerhouses of the late 20th century? And what does it mean?

From 1982-2001, these were college football’s five top programs, according to win percentage:

Let’s widen the scope a bit. Look at the 18 programs that won a national championship from 1982-2008. This season, more of them have a losing record (eight) than a winning record (seven). Three are .500.

And of the eight programs that won multiple national titles from ’82-’08, only two have a winning record. Only Oklahoma is better than 6-4. Combined they’re 40-39 this season.

Miami is disenchanted. Florida State is disheveled. Penn State is humbled. Florida is humiliated. LSU and USC gave up on 2021 before Halloween. And Nebraska, well, you know the Huskers’ pain.

That doesn’t include ’80s and ’90s powers like Washington, Virginia Tech, West Virginia, Kansas State and Colorado, all dormant and irrelevant.

Clearly college football still features its traditional Goliaths, most notably Alabama. But the most interesting programs — the stories driving Twitter, talk radio and text chains — are the ex-Goliaths wallowing in pity.

Do you find yourself talking more about Georgia or Florida? Ohio State or Texas? We’re fascinated by misery, and there’s almost too much to grasp.

So what gives? Why so much change over 20 years?

Iconic coaches departed. That’s a big factor. Cable TV leveled the playing field. Mama can send her son anywhere — not just to a top-10 program — and see the games. Increased revenue enabled every school, not just the elite, to spend millions on indoor facilities and assistant coaches. The spread offense gave underdogs a fighting chance. The transfer portal made it harder to stockpile depth.

But surely there’s an intangible factor, too. A mental element. Those powerhouses of the ’80s and ’90s can’t afford hiccups. When they lose badly, everyone revels in it. So the consequences are heavier.

Look how quickly a grease fire descends into a house fire at LSU, Florida or Texas. Does it happen that fast if it’s Mississippi State, Kentucky or Iowa State? Of course not. Smaller fan bases — and their administrations — forgive bad games and bad seasons.

The giants of the ’80s and ’90s cannot because their fans grew up on dominance. When the car fishtails, it doesn’t stabilize again. It’s in the ditch. Massive fan bases should be a source of power. But in turmoil, they’re like a van full of kids bickering about where to go for dinner.

Which brings us to Nebraska’s choice to retain Scott Frost. The Huskers, far and away the best program during the final third of the 20th century, have essentially chosen to act like Indiana or Missouri. While historical peers are zigging with new coaches, Nebraska zags with continuity. Especially in this cycle, it’s a compelling direction.

But acting like an underdog comes with risk, too. Tolerating bad football tends to enable its continuance. Once you surrender high standards, it’s hard to get them back.

In rebuilding a juggernaut, the Huskers must strike a balance that’s eluded them. Recognize the difference between progress and stagnation, even in defeat. Be patient with setbacks, but not with incompetence. Don’t assume you’re superior to anyone just because the helmets say so. Let those trophy cases be a source of motivation and unity, not entitlement and division.

Together the good folks of Lincoln, Tallahassee, Coral Gables, Gainesville, Knoxville, Austin and Los Angeles could hold a G7-style summit examining the benefits and burdens of tradition.

Or maybe they’d just engage in a group hug.

» Speaking of Texas, the trendy reaction to the Horns’ five-game losing streak is to wonder if the SEC wants a refund. Of course, that’s ridiculous. The SEC will love Texas even more because they lose.

Think about it: What was the highlight of Arkansas’ season? Beating Texas.

And the highlight of TCU’s season? Beating Texas.

The SEC doesn’t need another powerhouse, it needs a piñata to boost all those egos. The Longhorns will make everyone joyous because everyone will get to smack them.

» In past columns, we’ve shared Nebraska’s efficiency rankings based on performance, not just wins and losses. It’s a non-traditional measurement, but helpful in evaluating a team’s strength.

The following numbers are national efficiency rankings for past Husker teams, according to Football Outsiders.

Striking but sensible, right? My eyes tell me the 2009 Huskers would’ve throttled the ’13 and ’16 teams, even though they each had four losses.

The most intriguing number here is the last one, 25th in 2021. Is that number a fluke? Or an indicator the aircraft carrier is finally turning in the right direction? Hopefully the next seven days add clarity to this bizarre statistical season.

» Finally, one more odd efficiency ranking for 2021. Wisconsin is No. 6! Trailing only Georgia, Alabama, Ohio State, Michigan and Oklahoma State. Even in defeat, the 7-3 Badgers outyarded Penn State (by 68) and Notre Dame (by 76).

The Big Ten standings say Iowa, Minnesota and Purdue still have a chance to win the West. The analytics, on the other hand, say there’s a big gap between the Badgers and everyone else.

Wisconsin fuses smashmouth power football with ball carriers built to make big plays against Nebraska's defense. Lots of them. And this year the Badgers introduce a new running back to the tradition.

With reports that Mel Tucker is close to a big pay raise from Michigan State, he's about to get a major challenge from Ohio State. Sam McKewon picks that and every other Big Ten game this weekend.

Shatel: The reports of Wisconsin's demise were greatly exaggerated

So much for the Endangered Badger Theory. Six weeks ago the Huskers could dream about escaping from Camp Randall with a victory. But not anymore, writes Tom Shatel. 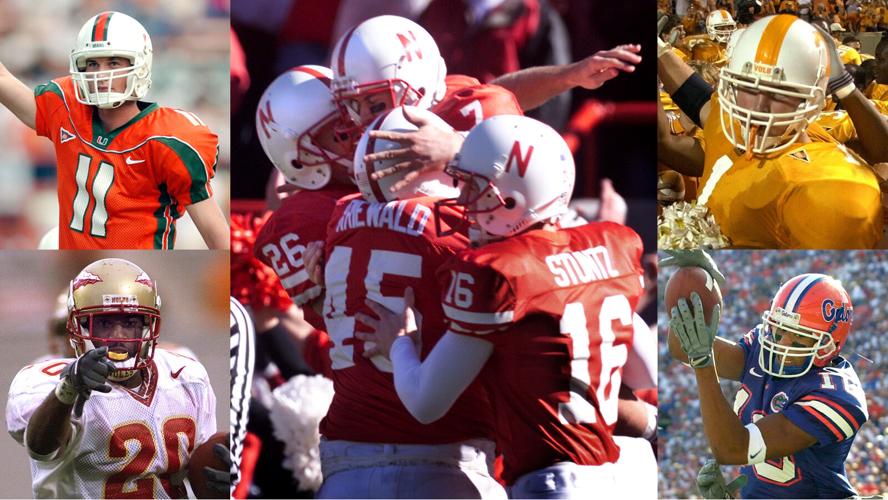 Nebraska, Miami, Florida State, Tennessee and Florida were once among the Goliaths of college football. Now 20 years later, none of those teams has a winning record. 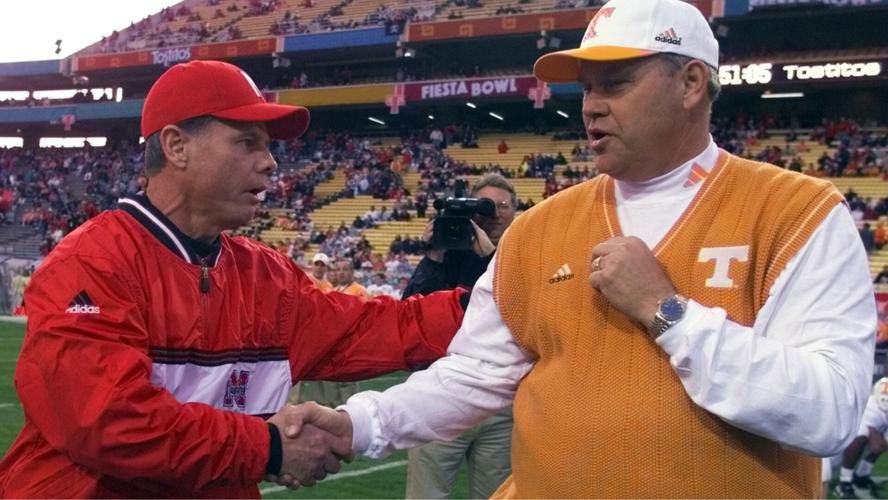 Frank Solich and Phil Fulmer, then the coaches of Nebraska and Tennessee, shake hands before the Fiesta Bowl in the 1999 season. For the last 20 years, neither the Huskers nor Volunteers have had much sustained success.