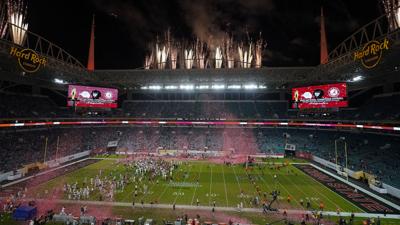 College football is a mess. And power brokers can’t seem to fix it without ruining some of its best elements.

Oklahoma might enjoy playing Alabama in SEC championship games. But does it have to sacrifice its rivalry with Oklahoma State? Do we need 16-team conferences? Of course not.

There may be no silver bullet, but there ARE better ideas than I’m hearing. And they don’t necessitate revolutionary war on the college football model.

The following proposal is one such compromise. A plan preserving the parts of college football we love while simultaneously giving the richest programs what they want — more money and prestige.

Pigskin daydreamers often wonder if their sport could steal a page from English soccer, where clubs earn promotion and relegation based on performance. Our model is different, more like World Cup qualification.

Think of the proposed college football season in three stages:

We deliberately didn’t use the word “conference” because it’s been bastardized by realignment.

The Neighborhood Level restores local control to the 130 FBS programs. For eight regular-season games, they can play whomever they want. Maybe they split into smaller seven-team leagues and play six neighborhood games plus two games of their choice. Maybe there’s a nine-team league that plays the same eight opponents each year.

Nebraska's 2021 schedule could look like the example to the right.

The details are adaptable. Different needs might emerge for different schools. Southern California might wish to be independent and play games across the country; UCLA might want to play all of its old Pac-10 rivals.

The point is, for the first eight games of the fall, it’s an old-school regular season. Universities are in charge. They share the TV money more evenly. They face their oldest rivals. The goal is to reach the top 40, not the top four. So teams can take more chances in scheduling to satisfy fan bases — or load up on cupcakes to boost their ego.

Now here comes a fork in the road. Golf fans might think of it as the Friday night cut.

After eight regular-season games — roughly the start of November — a selection committee ranks the top 40 teams. But it doesn’t stop there. The committee places those 40 teams in eight groups, comparable to the NCAA basketball committee’s bracketing for March Madness.

The selection show alone would be wildly entertaining.

The teams that DON’T make the top 40 drop into a second-level postseason. Maybe it’s an 90-team tournament. Maybe it’s group play, followed by a smaller tournament. Maybe the Power Five castoffs do their own thing while the Group of Five hold their own playoff. Is it riveting stuff? Not necessarily. But neither are late-November games between Cal and Colorado.

They receive distinction from the weaklings of FBS. They earn a bigger cut of the TV profits. And their fans get fresh opponents.

Based on a hypothetical season, a selection committee might create eight groups along these lines:

You get the picture.

Imagine the thrill of the season’s second stage, played in November at home sites against good teams you rarely see. These matchups would be a blast.

The committee might consider geography in creating these quintets — you probably don’t want Miami and Washington in the same group, for instance. It might try to avoid regular-season rematches, too. But like the NCAA basketball tournament, the highest priority is competitive balance.

After four games of group play, you’ll have some 4-0s, 3-1s, 2-2s, 1-3s and 0-4s. Tiebreakers are important. Occasionally, you’ll have a pair of eliminated teams meeting in the finale of group play. Not ideal, but the current season includes many more of those games. Play for pride.

OK, now the committee convenes again and divides the field once more. This time, the eight group winners plus four wild cards go into a 12-team playoff. The remaining 28 teams are assigned to bowl games — their 13th overall game of the fall.

Why include four wild cards?

Because group play will occasionally be messy (3-1, 3-1, 3-1, 1-3, 0-4). Because a great team might lose once and still deserve a playoff bid. Because first-round playoff byes are a powerful motivator for group-play performance.

We’ve reached the most familiar part of the plan.

Twelve teams. Home sites for Round 1 and the quarterfinals. Because all eight groups are similar in strength, group play outright winners would likely be top-eight seeds.

What’s the other characteristic of this level? Cash.

That’s what Alabama and Oklahoma really want from realignment. So give it to them, based on performance, not just tradition.

Teams qualifying for the 12-team playoff would reap the financial benefits. They wouldn’t have to share it with their conferences because conferences wouldn’t really exist.

OK, BUT WHY THREE PHASES

What’s the purpose of this proposed three-phase season?

First, it eliminates bloated conferences and restores more regional rivalry games in the regular season. Second, it adds an exciting first cut (after eight games), breaking up the monotony of a 12-game season and boosting profits for the sport’s biggest brands.

Do they need it? No, but they demand it.

Third, fans get an extended playoff available to anyone, regardless of pedigree. College football deserves a meritocracy.

While the "National Level" is the unique part of this plan, the Neighborhood Level is what's most important.

College football absolutely must preserve the games that matter most to its die-hard fans. Can’t we agree that enlarging conferences has only made the landscape more shaky?

Acting like Syracuse and Miami have enough in common to be “conference rivals” is foolish. Does Texas really think it will develop loyalty with Florida?

The money looks good on paper, but season-ticket holders don't care how much money their athletic director or coach makes. They care about relationships and traditions.

OK, but what about the TV money? Don't schools need “conferences” to facilitate their media rights?

Not anymore. They either do it themselves, case by case, or split revenues across the board the first eight games. Once the season reaches the national and playoff levels, the next contracts kick in.

Does the College Football Cup solve every problem?

Of course not. But this model checks a lot of important boxes, promising to make our sacred fall Saturdays even better.

After reading both Dirk Chatelain's and Tom Shatel's plans, which would you like to see?

The World-Herald's two plans to save college football from itself

The tectonic plates shifting underneath college football may lead to something greater than a few teams finding new conferences. Check out The…

McKewon: It's do-or-die for the Huskers. And it looks like they're finally ready to do

Necessity and urgency make good fathers of invention. And Nebraska particularly needs parenting on offense. There are 65 Power Five teams, and 83.1% scored more points per game than NU last season.

Shatel: With Frank Solich retiring, it's time to bring him back to Nebraska

Now that he is retiring, it is time to bring former Nebraska coach Frank Solich home. Throw him a shindig. A toast in his honor. A standing ovation at Memorial Stadium, writes Tom Shatel. 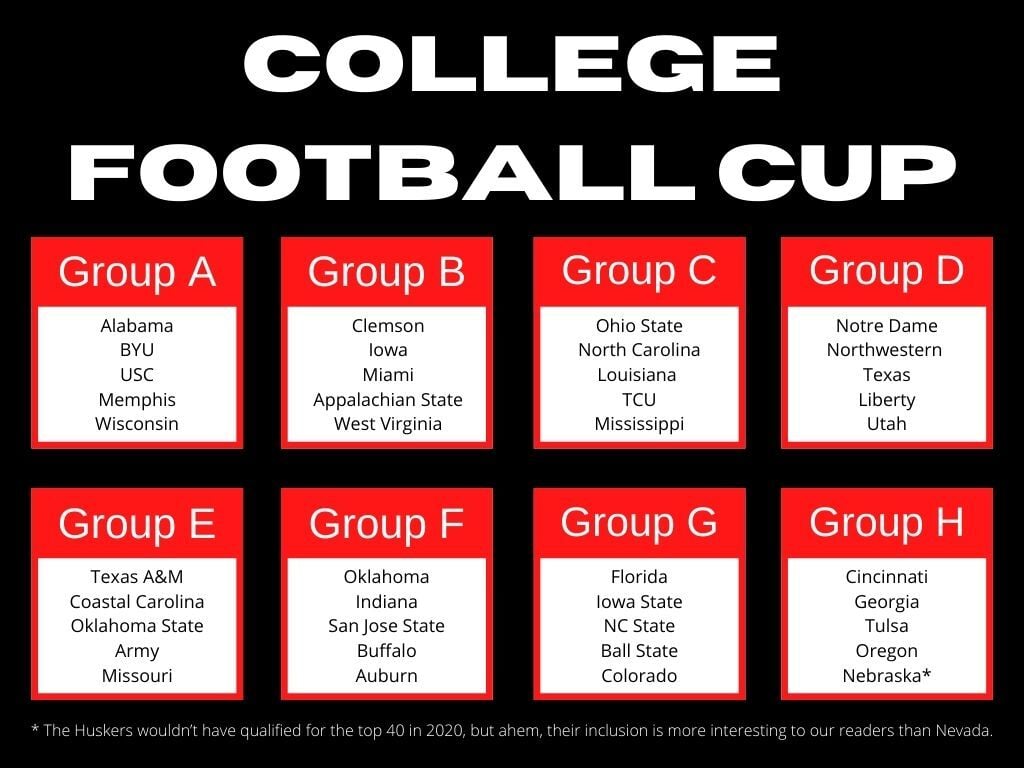