This article originally ran in The World-Herald on Nov. 1, 1970.

Folsom Field, Boulder, Colo. — It’s not true that Bob Devaney walks on water, even if that was the picture shown on a poster in the Big Red rooting section Saturday.

But it is true that the Nebraska coach herded his Huskers past a big hurdle in their scrap for another Big Eight football championship, whipping Colorado, 29-13.

This was no easy foe, the stubborn Buffaloes who lost three of four previous conference games. In fact they made all kinds of threatening gestures before succumbing to a bristling Husker crew.

Two plays relieved the pressure on the embattled Huskers, who were backed to their end zone where playful N.U. fans had tossed a number of oranges. After the Coloradans whittled Nebraska’s margin to two points at 15-13 in the fourth quarter, the Buffs went for a tie. The man they turned the task over to was Cliff Branch, the most productive runner on the field this day.

He took a wide pitch and made a dive for the two extra points. Officials ruled that Branch’s knee skimmed the ground a yard short of the tying points.

Larry Jacobson, the biggest Husker defender at 247, came up with the biggest play of the season. The junior tackle from Sioux Falls, S.D., was credited with the diving effort that sent Branch to the turf.

Jeff Kinney joined the heroics seconds later. Jeff gathered in his third kickoff of the season at the goal and set sail. He wasn’t downed until he reached the Colorado 21.

The 79-yard return spurred the Huskers to the clinching touchdown and the N.U. unbeaten string reached 15. Credit the Buffaloes with a gallant upset effort. They kept whittling away at Nebraska until they gained the statistical advantage 337 yards to 326.

But as it has been in three of Colorado’s conference losses, the Buffs lost the most vital statistic on the scoreboard. Amid Nebraska chants of “We’re No. 1” as the final seconds ticked off, reserve center Doug Jainail tucked the ball under his arm and raced for the dressing room.

The Van Brownson-Guy Ingles battery built a 12-0 lead in the first quarter and the Huskers’ computer-type offense appeared headed for a comfortable victory.

Ingles caught 35- and 39-yarders for scores and ran his career reception total to 68 to break the record set by Dennis Richnafsky in 1967.

Paul Rogers missed his first conversion attempt after Brownson had to grab a high and wide snap from center. But the Husker specialist, who betters his Big Eight career record every time he hits a field goal, came up with the big one this time.

Nebraska was clinging to a 12-7 lead in the third quarter when the Buffs stalled a Husker drive at the 29. Rogers hit the goal — the 23rd of his career — from 46 yards to put the pressure on Colorado.

It was Rogers’ fourth career fielder against Colorado.

Brownson completed 11 of 17 passes for 173 yards and ran his season touchdown total to six. The slender quarterback added 30 yards in rushing for another good day, in spite of some bullying efforts by Billy Drake and Dave Capra, who combined for 24 tackles.

This was a bruising struggle despite the ease in which the Huskers built a 12-0 lead by scoring two out of the first three times they had the ball.

Nebraska went 79 yards with the opening kickoff. Until the ball reached the C.U. 35, the big play had been a Brownson-to-Johnny Rodgers pass for 23.

Then Ingles, who returned a punt 62 yards for the clinching touchdown here two years ago, got behind Jim Conch on the right sideline.

Brownson expertly arched the ball into little Guy’s arms in the end zone and Jim Conch stomped his feet in the turf ... maybe harder than Ralphie, the 700-pound Buffalo who leads the Colorado team on the field to start play.

Only 4:43 had elapsed when Ingles outfoxed Conch. Then Rogers’ hurried kick wobbled wide to the left.

Branch broke away for 24 yards to highlight a Colorado counterattack that reached the Nebraska 26. On third and one at that point, Jim Bratten fumbled.

When the players unpiled, there was Jacobson on the ball, with his fourth recovery of the season.

After an exchange of punts, Nebraska started its second drive. This one, beginning at the 32, stayed on the ground for five plays. One of them was a nifty 21-yard keeper by Brownson.

It was time for a Van-and-Guy passing demonstration. Ingles beat Cullen Bryant on a 39-yard scoring play and Bryant showed his disgust.

Husker faithful, estimated at 15,000, whooped it up as Nebraska thwarted every Colorado bid to get something going. The Blackshirts forced three kicks and their offensive partners had backed the Buffs to their seven on a 45-yard Jeff Hughes punt.

There to greet Branch as he received the kick was big Dick Rupert. Branch was stopped in his tracks.

Any hopes Nebraska had of blowing Colorado out of the game ended in a hurry. The Buffs gobbled up big chunks of ground — five ... seven ... nine, all by Jon Keyworth, one of the toughest runners the Nebraskans have had to contend with.

Then came Keyworth again on an option for 15 yards. Branch took a reverse and only Jim Anderson’s touchdown saving tackle stopped the play after 33 yards. The ball rested on the 24 of Nebraska.

John Tarver took over to punch right up the middle for 14 and then three. Bratten, on a neat fake, then stepped past Jerry Murtaugh en route to a seven-yard touchdown run. Dave Haney converted to make it 12-7.

The Buffs covered the 93 yards with ridiculous ease, using only seven plays, all on the ground.

The Blackshirts, the starch again in their backbone after halftime oratory, threw the Buffs back minus four after three plays. A kick was forced.

But the Buffs stopped N.U. and took over at their 20 on the Hughes punt. Off and rolling again, Keyworth went for 20 and Tarver for 18. The hosts were on the 25, but a clipping penalty dulled the drive and Haney’s field goal from the 39 was short.

Nebraska’s field goal was set up on a 19-yard Dan Schneiss run and a pass interference ruling that gave the Huskers a first down on a third-and-seven play at the Colorado 35.

Colorado, with a lot of ginger left, stopped the drive and Rogers kicked his sixth field goal in a row after starting the season with three misses.

But Colorado wouldn’t stay down. The Buffs almost sprung Branch on the kickoff and might have if it hadn’t been for Joe Blahak’s tackle on the C.U. 41.

Fourteen plays later Bratten squirmed past Murtaugh for the C.U. touchdown. Time out for plotting ... on both sides.

This AP poll reflects rankings after Nebraska's win over Colorado.

Branch took the reverse, a play that netted him 95 yards in nine carries, and circled around the right side. Blahak made a dive and so did Jacobson.

Buff fans booed and groaned as officials frantically waved their arms that the end-zone sprawling Branch did not get the two tying points.

But there was time enough for the Buffs to go again as 11:22 remained on the clock.

Kinney’s return of the ensuing kickoff wasn’t the Fancy Dan approach to running. He found the opening and didn’t stop until Ken Brown and Pat Murphy ran him down at the C.U. 21.

When Brownson sneaked in, 9:27 remained and you could hear the Buffs’ death gurgle.

The finishing touches were applied when Jacobson recovered a Branch fumble at the Colorado 40.

Brownson pegged a pass to Kinney for 22 yards and Jeff got the scoring honors from the seven with 5:34 to play.

About that time all there was for Coloradans to cheer was the big banner the cross country team paraded around the stands. It said, “C.U.’s Harriers are 5-0.”

Murtaugh, with 15 tackles, may not have matched Phil Irwin’s 24 tackles for C.U., and the Huskers may have been outgained.

But no one’s going to dispute the Huskers’ right to head for Iowa State Saturday with an unbeaten record and another step toward a major bowl assignment.

For three quarters in 1970, Colorado's defense was able to keep Nebraska's offense under control. But then came the fourth quarter.

Reading about the 1970 Huskers helps dissect a Nebraska program once in the stage this current NU team is in, writes Thad Livingston.

Sam McKewon gives his three takes on Jailen Weaver's commitment to the Huskers. 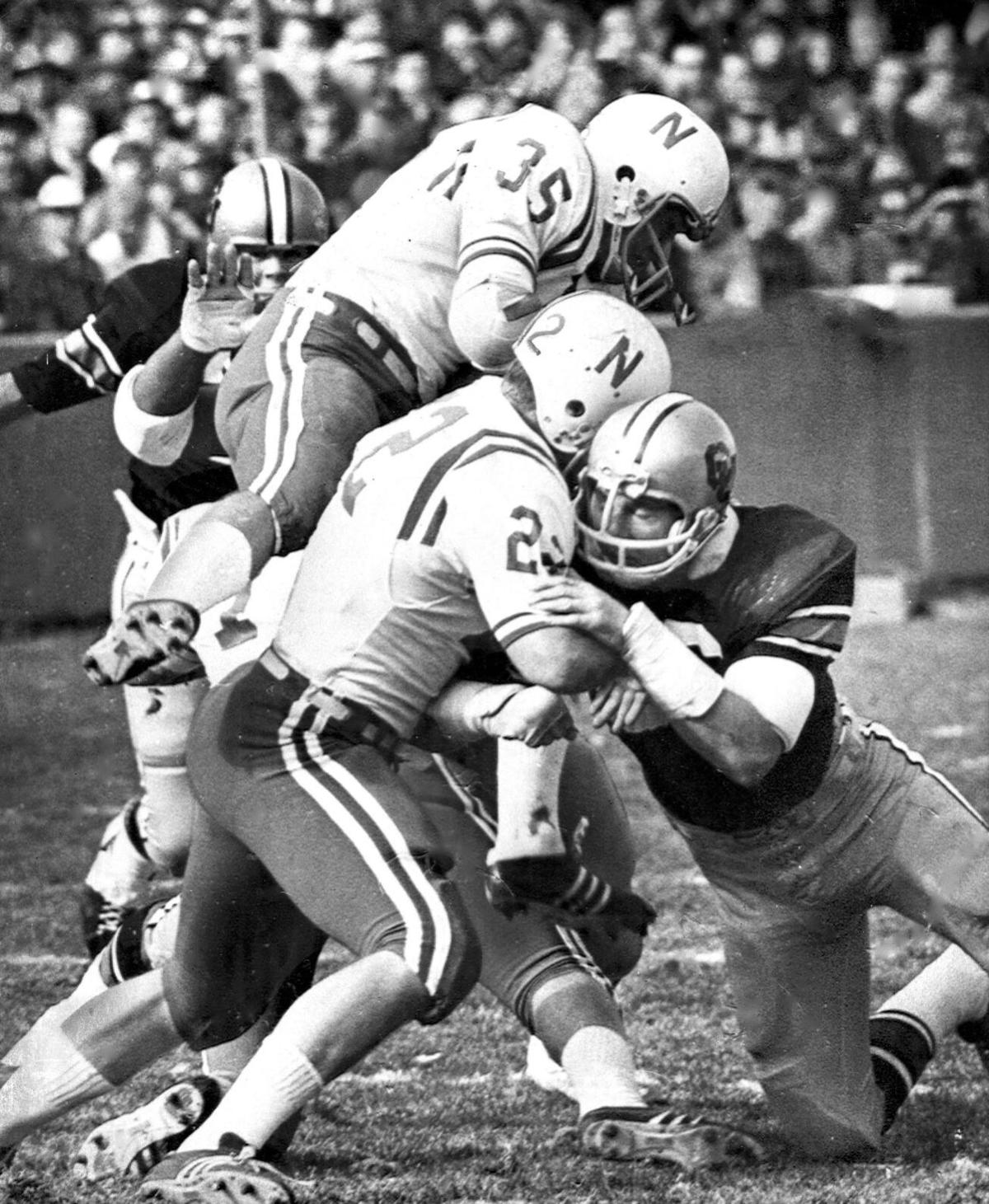 With Dan Schneiss' assistance, Jeff Kinney gains four yards in first quarter of Nebraska's game against Colorado in 1970. The Huskers beat the Buffaloes 29-13.