With 66,928 looking on (the sixth largest crowd in Nebraska history), the Huskers scored three times on passes and set up a fourth score on Johnny Rodgers’ fancy, 38-yard punt return.

But the Huskers were far from the precision-like offensive team that tied Southern California a week ago.

Eddie Periard, the feisty middle guard, and other Blackshirt tormentors, made life miserable for the Cadets, however.

Army had just 18 yards rushing, with the Huskers firing through for 17 tackles behind the line of scrimmage.

Periard, a bantam of a bruiser in the middle, came through with 11 tackles, four totaling 22 yards in losses. Jerry Murtaugh was little Eddie’s chief helper with nine tackles.

If Nebraska’s offense was a little off its game, especially the first half, it was understandable, said George “Butch” Nash, the Minnesota assistant who scouted the game.

“I was plenty impressed,” said Nash, who was taking notes in preparation of Nebraska’s visit to Gopherland next Saturday.

Jerry Tagge connected on 13 of 18 passes, two to the stop-and-go Rodgers for touchdowns. Then he turned the quarterbacking over to Van Brownson, who made his first appearance of the year.

Brownson completed the scoring by pitching a 31-yard touchdown pass to Woody Cox early in the fourth period.

With Tagge’s aerials gaining 174 and Brownson’s 4-5 tacking on an additional 55, the Husker passing attack looked more effective than the ground game.

Yet the Husker runners managed 222 yards.

Nebraska owned a 7-0 halftime advantage while wasting many of the 250 yards accumulated in fussing to overcome three lost fumbles and four penalties.

The Huskers broke the scoreless game with only 4:48 left in the half.

Obviously aroused by an Army bid to get on the scoreboard first via a field goal, the N.U. offense reeled off 80 yards in 10 plays.

Tagge didn’t fiddle around much on the ground, firing six of seven passes into friendly hands to eat up 69 yards.

Rodgers sped behind Lane Morehead to gather in a 43-yarder for the score and Paul Rogers kicked the point.

Rodgers, who finished with six catches for 106 yards, had the crowd buzzing the first time he had the ball in the third quarter.

He grabbed a bounding punt at mid-field and left Army defenders groping for him like a sleep-walker looking for a light switch.

Joe Orduna, who collected 89 yards in 20 carries, raced to the two and scored on the next play. Rogers made it 14-0.

The Huskers, mostly a lackluster group the first half, forced a punt three plays later.

Although set back by penalties of five and 15 yards, the determined Huskers sailed in to score in seven plays from the Army 41.

This AP poll originally ran on Sept. 28, 1970, and reflects the results of the Huskers' win over Army.

Tagge nestled a pass into Rodgers’ arms as Charles Blakely and Jack Greenlee watched helplessly. The payoff came on a 26-yard play.

Army couldn’t get untracked the first half with Bob Mohn at quarterback, so the Cadets gave the job to Bernie Wall in the third period.

Wall completed six passes despite the hounding of Nebraska forwards. The Cadets made four first downs in a row. They reached the Nebraska 15 before a holding penalty dulled the march.

The penalty, coupled with a Jim Anderson tackle that set the Cadets back five more yards, necessitated an Army punt.

Brownson, who fumbled away the ball in his first appearance in the second quarter, took over for Tagge with 1:04 left in the third quarter.

He ushered the Huskers 80 yards in seven plays. The last one covered the final 31 as he expertly arched a pass to Cox for the score to give indication his ailing right elbow is healed.

When Rogers’ kick sailed through to complete scoring with 12:33 to go, it marked the 12th straight conversion for the placekicking expert from Rock Rapids, Ia. Eleven have come this year.

Another highlight of the fourth quarter came when the second unit defense thwarted an Army touchdown bid after the Cadets had a first down at the two.

Wall had two completions, and an 18-yard run by Ray Ritacco put the ball at the Nebraska 11. An interference call made it first down on the two.

Four plays later the Junior Blackshirts turned the ball over to the offensive second stringer at the seven.

The final minutes didn’t prove much except that Brownson’s back in his best scrambling form. He carried five times and gained 25 yards, despite a five-yard loss on a pass-play.

With Nebraska’s double dose of quarterbacking effectiveness to go with Orduna and Jeff Kinney at tailback, scout Nash said there’s plenty of practice overtime ahead for Minnesota defenders this week.

Nash overlooked a batch of N.U. errors that might have served only to build up a score over an outmanned Cadet team.

Nebraska’s offensive attack produced big numbers in ’69. But it really flourished in 1970 with the arrival of Johnny Rodgers. Impeccable timing, huh?

When the 1970 Huskers opened the season, they didn't know they'd be national champions that year. What they did know was that Johnny Rodgers was "everything" people said about him.

It might sound odd, but many of the best parts about former Husker Joe Dailey's life today took root during his time at Nebraska.

Army was 1-1 when it played Nebraska in 1970. A second win never came that season. 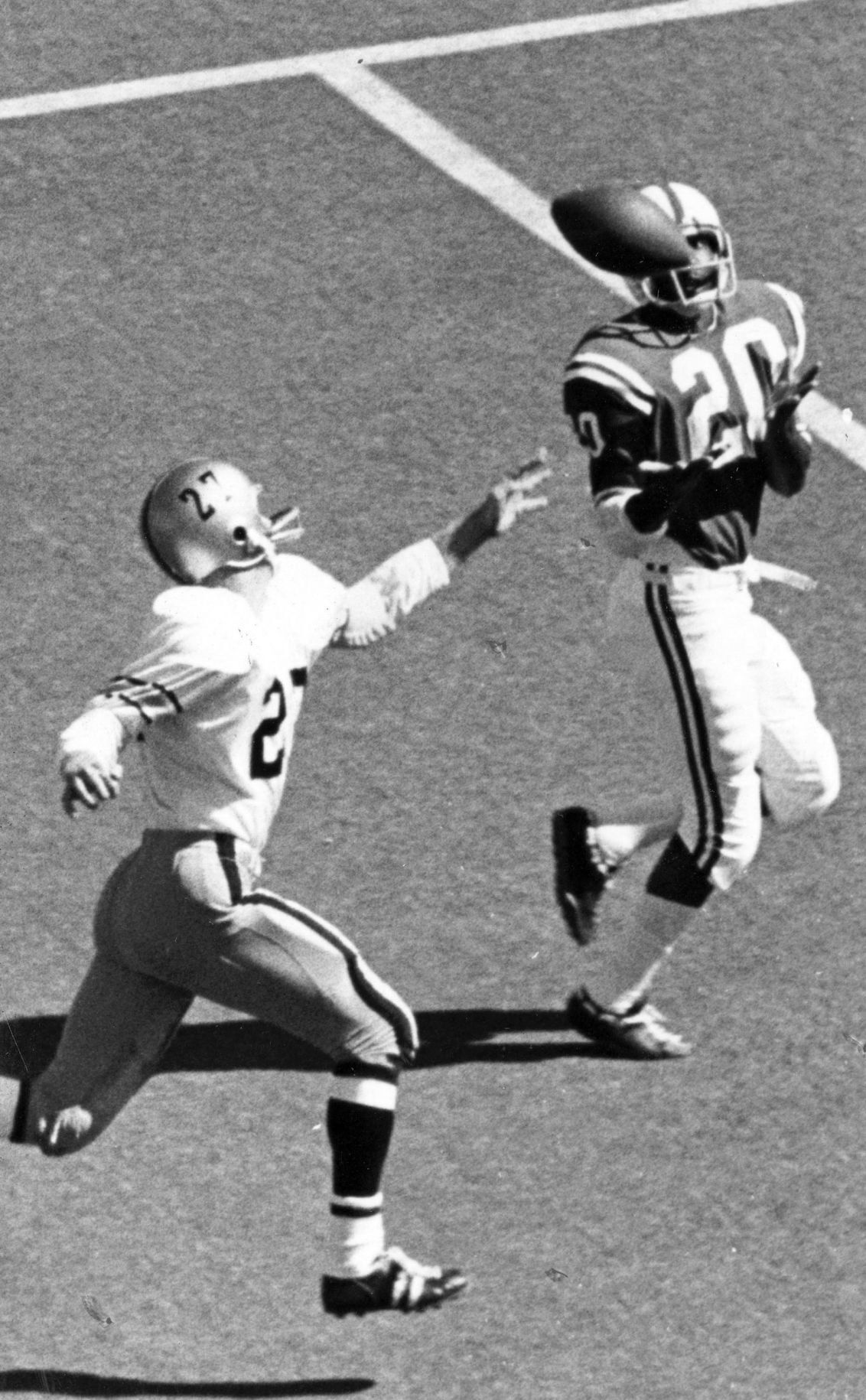 Johnny Rodgers catches a pass against Army in 1970.