This article originally ran in The World-Herald on Nov. 8, 1970.

The Huskers again used a variety offense, generated by Jerry Tagge, to rule Iowa State’s Big Eight-leading pass defense for their eighth victory and fifth straight in the league.

Nebraska, in pleasing its legion of red-clad followers and Sugar and Cotton Bowl scouts, piled up 565 yards in total offense.

Tagge, getting his first start since the Oct. 10 Missouri game, completed 18 of 27 passes for 223 yards as he took over the quarterbacking for ailing Van Brownson. Van’s appearances were limited to holding for Paul Rogers as the Rock Rapids, Ia., specialist broke the Big Eight record with six kicks. He has a total of 82.

The game and sometimes over-aggressive Cyclones kept plugging away and made it a respectable score by tallying twice in the final two minutes.

With the Husker offense functioning in great style, the defensive Blackshirts once more had no worries. The Cyclones did batter them around a bit, to the tune of 345 yards. This is a matter that Devaney may discuss with them at length this week as he prepares his league leaders for Kansas State’s invasion Saturday.

Jeff Kinney led Nebraska’s solid ground game by whirling for 116 of the 342 rushing yards accumulated by the Huskers.

His co-star at tailback, Joe Orduna, had 69 to become the best rusher in the Devaney era. Orduna had the record on his third carry — and went on to score three times as he ran his season touchdown total to nine.

Rogers’ first placekick was blocked by Harlan, Ia., junior Steve Jacobsen, but he came back with six in a row to break the career mark of 80 set by Kansas’ Bill Bell last year. Rogers is 38 for 41 this season.

This offensive display gave the host school’s fans in the record 36,000 turnout plenty of chances to cheer as the gazelle-like Otto Stowe continued his circus catches.

Stowe made two touchdown receptions despite some good coverage by Husker defenders. He made six catches for 63 yards.

But there weren’t enough guns in Iowa State’s arsenal to match the Huskers, who rolled up 31 first downs and never were in serious trouble after popping out front by 12-0 the first quarter.

The Cyclones were a little bothersome, though, like a chihuahua nipping at their heels until the Huskers exploded for 21 points in the third period.

Nebraska, its awesome power showing on some plays, pulled out some new wrinkles, too, as fullback Dan Schneiss turned in his best game of the year.

The Husker captain scored twice, once on a fine run for 23 yards and another on a seven-yard pass from Tagge.

Schneiss, who doubles as the player-cheerleader on the field, hit the numbed Cyclone defense for 92 yards on 14 carries.

Iowa State sobered the more than 6,000 Husker followers with a 36-yard pass from Dean Carlson to Dave McCurry on the first play after the opening kickoff.

But on the next play, Carlson fumbled and Eddie Periard recovered at the Nebraska 26.

Sixteen plays later Nebraska was on the scoreboard, with Orduna plowing over from the three behind Schneiss and Johnny Rodgers.

The blocked kick seemed insignificant then and it never did really cause much concern among the Huskers.

That was just the start, because the Big Red covered 66, 76 and 34 yards on three of its next possessions.

The onslaught was slowed only once, when Orduna fumbled at his 17 to set up Reggie Shoemake’s 11th field goal of the year, a 39-yarder that cut the margin to 12-3.

Orduna skipped past Wilson’s record on a four-yard run during the second touchdown drive that had as its longest gainer a 12-yard pass from Tagge to Orduna. It was a little sideline toss after the senior speedster went in motion — a first for that play out of the Nebraska book.

Orduna capped the drive from the eight, slipping and sliding through a neat hole with 1:33 to go in the quarter.

The most potent offensive display was to follow the Shoemake field goal. Nebraska barreled the 76 yards after the kickoff in 10 plays.

Tagge twice fired to Jerry List, for 19 and 15 yards, as if to reward the tight end for his devastating block that freed Kinney for a 28-yard bolt.

Tagge sneaked in from the one and this time Rogers converted to start another extra-point string.

Behind by 19-3, the over-anxious Cyclones went to the air and Husker linebacker Bob Terrio intercepted and put the ball on the ISU 34.

On the seventh play, a third downer, Tagge passed to Schneiss, a wide-open eager young receptor, for the seven-yard touchdown play.

Only 1:52 remained when Rodgers made it 25-3, but as it turned out, it was time enough for Iowa State to score.

After early third-quarter sparring, the Huskers finally got off the 26-11 lead with a 74-yard sashay in nine plays.

Rodgers, who was blanked last week by Colorado after scoring in seven straight games, got back in the touchdown parade. He won a wrestling match with Cyclone John Schwizer for the score that made it 33-11 after Rogers’ kick.

Only 4:33 remained in the third quarter, but as it turned out that was plenty of time for one of the most wide-open offensive exchanges of the year.

This AP poll reflects the Huskers win over Iowa State.

A short kick put Nebraska in motion from its 41 as Carl Johnson grabbed the pop-up boot.

Tagge completed passes of 29 to Rodgers and 21 to List as the Huskers put the ball on the six from where Orduna scored.

Bill Kosch’s interception of a Carlson pass gave Nebraska another opportunity from the N.U. 36. There was no stopping the Huskers as they started wearing down the Cyclones.

Tempers flared at one stage while the Huskers wheeled toward the Cyclone goal and officials asked both coaches to calm their players.

Nebraska never went to the air as it journeyed 64 yards for the seventh touchdown of the day. Even Guy Ingles got into the ball-carrying act for the first time this year — and scooted 13 yards, thanks to a way-clearing block by Bob Newton.

Schneiss capped the drive with another 23-yard run on this calm, cool day, for the score 31 seconds before the end of the third period.

Kosch’s second interception of the day and his fifth of the season gave the alternate unit, except for Tagge, a chance to get into the scoring act.

Frank Vactor ended the 32-yard drive when he plunged in from the two after collecting all but five of the yards on the abbreviated march.

George Amundson, who was a surprise performer at tailback and the deep man on kickoffs, moved in at quarterback against the Husker reserves late in the game.

The sophomore husky completed a 10-yard touchdown pass to Stowe on another brilliant reception by the Cyclones’ all-time record catcher.

Amundson, who has credit for the longest discus throw in high school history, uncorked a 55-yard pass to McCurry with 42 seconds left to wind up scoring.

Nebraska, its road games over, except for the possible bowl action, returned home by bus. But the Huskers might be looking and thinking to the airways.

Kansas State’s air-minded, upset hopeful Wildcats are next up and the Husker defenders can’t be gloating much over the allowance of 228 yards via passing to Iowa State.

For three quarters in 1970, Colorado's defense was able to keep Nebraska's offense under control. But then came the fourth quarter.

Reading about the 1970 Huskers helps dissect a Nebraska program once in the stage this current NU team is in, writes Thad Livingston.

On Oct. 31, 1970, Husker football defeated one of their toughest Big Eight foes, Colorado. Check out the 50-year-old article recapping the game.

The Nebraska men with whistles were just as impressive as the ones in uniform.

March to No. 1: Happy Huskers to Ballot on Bowls

On Nov. 14, 1970, Husker football clinched a share of the Big Eight title with their win over Kansas State. Check out the 50-year-old article recapping the game. 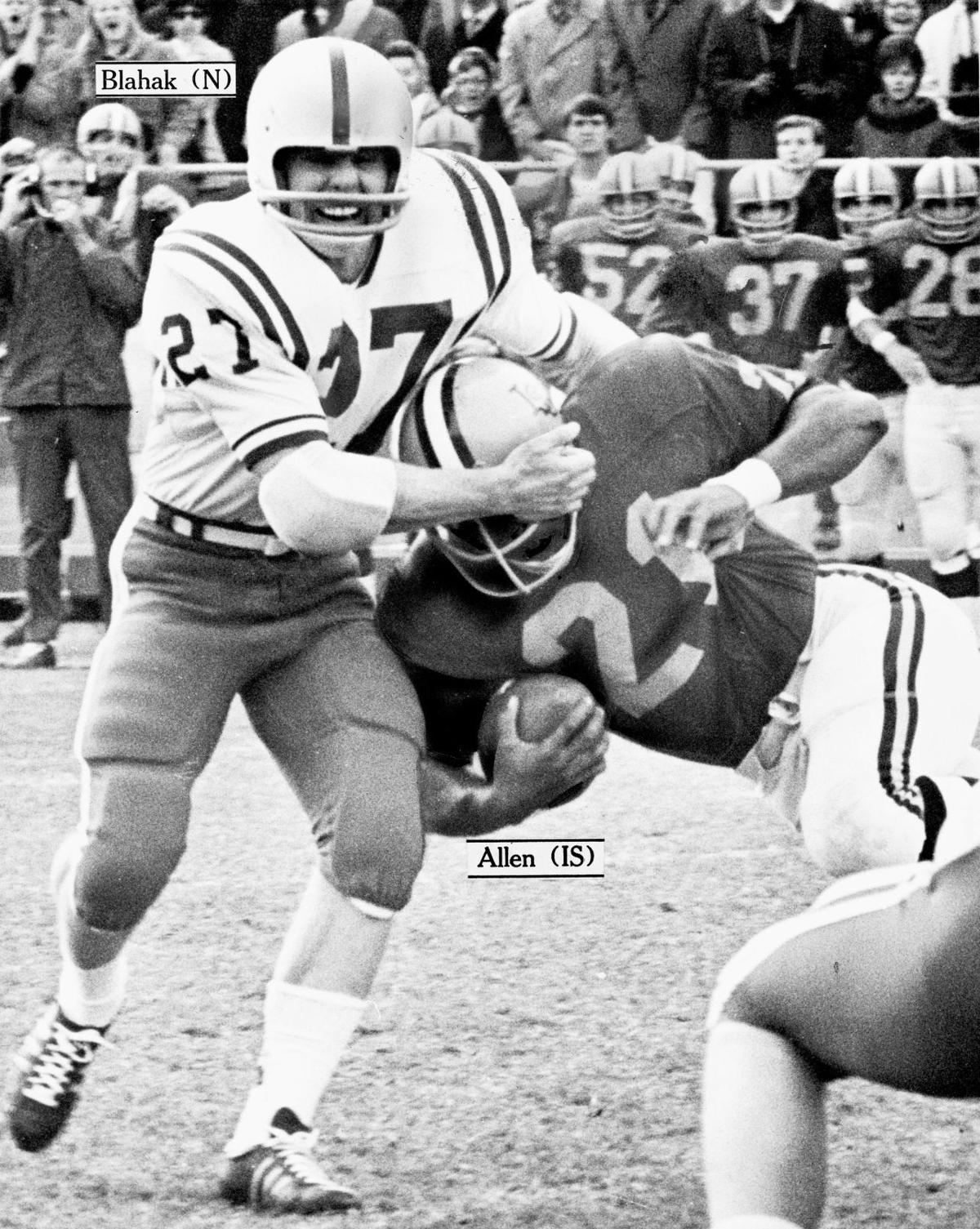