LINCOLN — In front of a record spring game crowd, the next great Nebraska quarterback threw darts.

Perfect on the first drive — 5 for 5, 70 yards and a touchdown. He eventually threw for an NU spring game record 357 yards on just 27 passes, shattering the previous mark by more than 100 yards and ending all speculation about who would be NU’s starter in 2005.

"It was a lot of fun," Zac Taylor said 16 years ago. "It is pretty crazy. The people of Nebraska are great. The 63,000 fans are incredible and show how much they care about football. It was amazing. I got chills in the tunnel. I was a little nervous during the first play, just like in high school."

Taylor’s first spring game was no false front. He turned out to be just as good in games that mattered as he was in glorified scrimmages. He was the Big 12 offensive player of the year in 2006 and won 17 games in two seasons, often on the strength of his right arm.

And when Nebraska’s defense intercepted six passes in the 2003 spring game, that was no fluke either. Bo Pelini’s bunch went on to lead the nation in takeaways. The two teams combined to score 13 points in that spring game, setting the stage for Frank Solich’s final season in Lincoln, where the offense was often hide-your-eyes bad while Pelini’s D carried the team to a 10-3 record.

When Bobby Newcombe broke off a 91-yard touchdown run in the 1998 spring game — effectively winning the job from Eric Crouch and Frankie London — the stage seemed set for Newcombe’s QB stardom. But through no fault of his own, he never reached that level after suffering a knee injury in the ’98 season opener. Instead Crouch began his Heisman Trophy career.

In the 2011 spring game, Jamal Turner — a top-100 recruit new to campus — electrified fans with three long returns and four catches for 93 yards. He somersaulted into the end zone on one play.

But injuries stalled Turner’s career, too. He caught nine passes as a senior.

In the ’99 game, Chris Butler looked like Nebraska’s best running back. He eventually transferred to Auburn.

Collins Okafor and Lester Ward had impressive spring games in 2009. A few months later, a kid from Dallas named Rex Burkhead rolled onto campus and changed the narrative.

Figuring out which performances point to stardom — and which don’t — is a coin flip. Especially with quarterbacks.

In 2011, it was Martinez, after a roller coaster redshirt freshman season, watching Brion Carnes get the hosannas as he completed 11 of 15 passes for 173 yards.

Tristan Gebbia didn’t throw a single pass at Nebraska. But his spring game performances were right at the top, completing 65% of his 62 passes over two springs. Gebbia was particularly busy in the 2017 game with 30 passes.

A few days later Riley anointed Tanner Lee as the starter over Patrick O'Brien and Gebbia. That disastrous season led to Riley’s firing, then Lee went to the NFL, O’Brien transferred after spring camp and Gebbia galled Husker coaches by leaving just before the 2018 season began.

If McCaffrey wins the job at Louisville this season — a longshot since he missed spring camp — it won’t be because of his spring game performance at NU in 2019. He threw eight passes — and completed one.

Shatel: This Husker spring game will be more meaningful than any other

Every Nebraska football spring game since 2000

McKewon: Huskers have many pieces in the offensive line puzzle. How will they fit together?

If you’re looking for something to watch at Saturday’s spring game, watch Greg Austin’s offensive line. So much of the leap Nebraska’s offense has to take could be done on the backs of his big boys.

On a new Carriker Chronicles, Adam is joined by a member of Nebraska's 1971 national championship to tell the story of Rex Lowe, whose battle with cancer inspired the Huskers to win the title.

Heinrich Haarberg, a Kearney Catholic grad, is ready for his debut as a Husker quarterback in Memorial Stadium during Saturday's spring game. "That’s my field, and that’s where I play now."

Nebraska's spring game is almost here. Here are 10 Huskers to watch as they try to cap off their springs with an impressive performance and build momentum for the fall.

A little less than a year after the project was slated to begin, groundbreaking for Nebraska's massive North Stadium Expansion/football facility will commence Friday.

Are 9 wins realistic for Husker football in 2021? Bill Moos thinks so

Nebraska Athletic Director Bill Moos calls the Huskers' schedule "the hardest in the country," but he still sees eight or nine wins as a "realistic expectation" in 2021.

Husker tight end Thomas Fidone, a touted freshman from Council Bluffs, suffered a knee injury last week that will require surgery, but Scott Frost hopes he may still be able to play at some point this season.

Nebraska had more than 40 players on its injury list at various points this spring, and for that reason, Scott Frost said the first half of Saturday's spring game won't feature live tackling.

Scott Frost gave the impression Wednesday that adding another quarterback through the transfer portal will not be among Nebraska's top priorities for the rest of this offseason.

What fans need to know about Saturday's Husker spring game

Heading down to Lincoln on Saturday? Nebraska's annual spring game kicks off at 1 p.m. at Memorial Stadium. Here’s what you need to know to get ready for the game.

Husker notes: Keep an eye on these D-linemen; Excitement to play for fans

Defensive line coach Tony Tuioti shared insight into some young defensive lineman standing out this spring, and tight end Austin Allen explains why he's so excited to play in front of fans again.

Ryan Held sees a lot of potential among Nebraska's running backs, but they lack experience and struggled to stay healthy this spring. So he says it may take a Rocky-style montage to get them going.

Carriker Chronicles: 8 or 9 wins may be realistic, but is it the right thing to say?

On a new Carriker Chronicles, Adam reacts to the recent comments from Husker Athletic Director Bill Moos about his expectations for the upcoming Nebraska football season.

Bill Moos doubles down on 2021 expectations for Nebraska football

In an interview with The World-Herald, Nebraska Athletic Director Bill Moos was bullish about his prediction of Husker football having an eight or nine-win season.

The Huskers announced the rosters for Saturday's Red-White spring game, which kicks off at 1 p.m.

'Nebraska needs football' and Memorial Stadium is back open for business 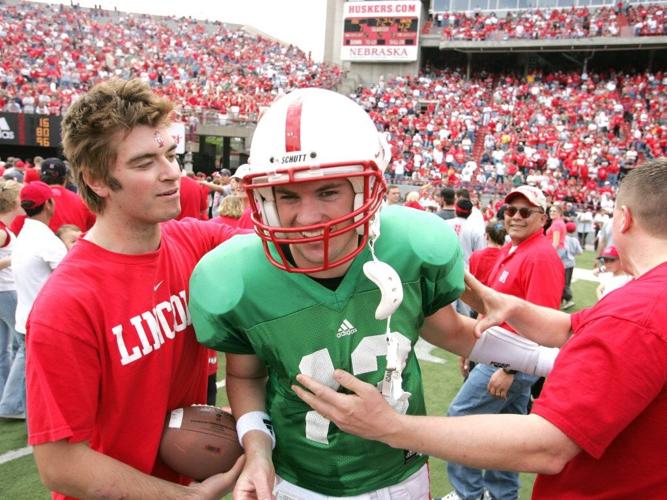 Zac Taylor's performance in the 2005 spring game set the stage for what would become a stellar Husker career. 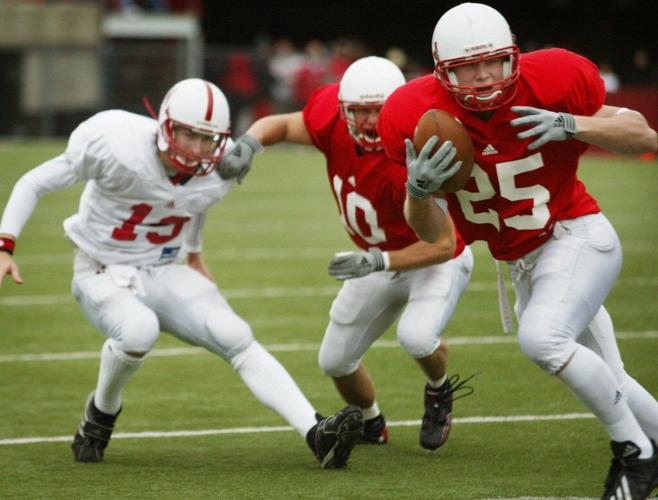 Blake Tiedtke intercepts a pass during the 2003 spring game. The two defenses combined for six interceptions that day. 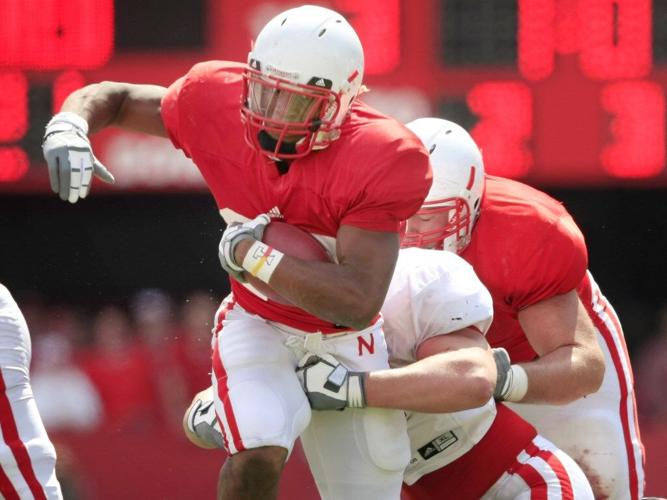 Collins Okafor led everyone with 79 rushing yards on 11 carries in the 2009 spring game. But he only had one carry for nine yards in the entire 2009 season. 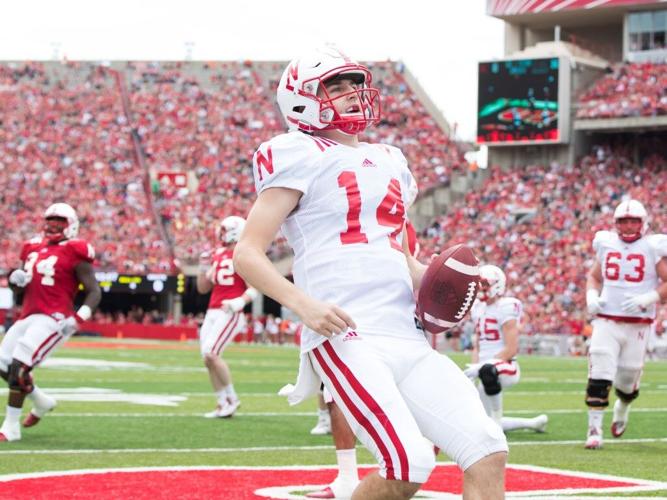 Tristan Gebbia had a couple of solid spring games in 2017 and 2018, but he never threw a pass in a real game for Nebraska.