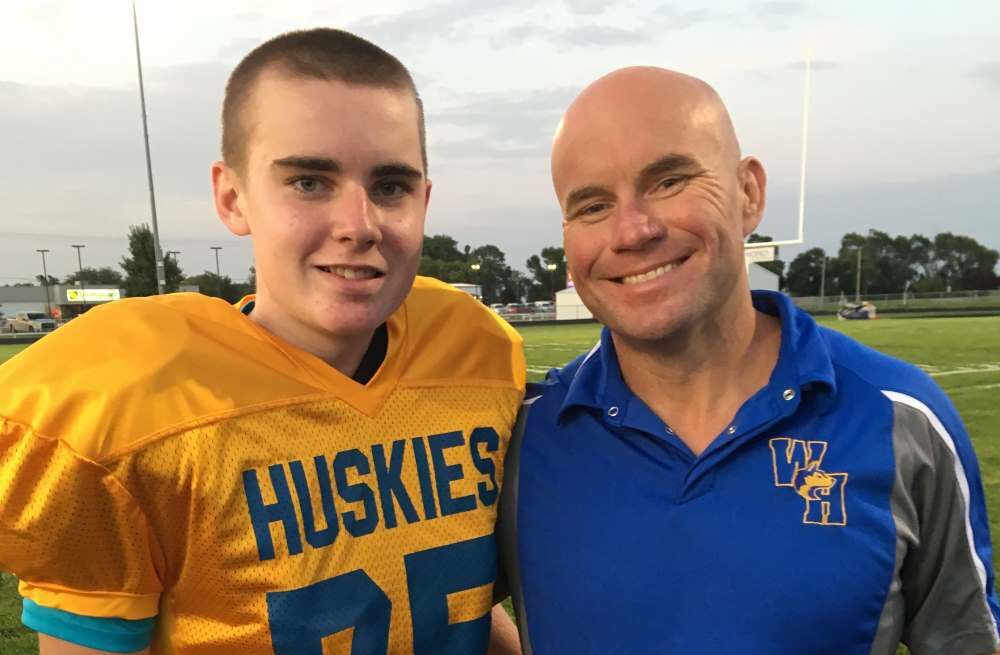 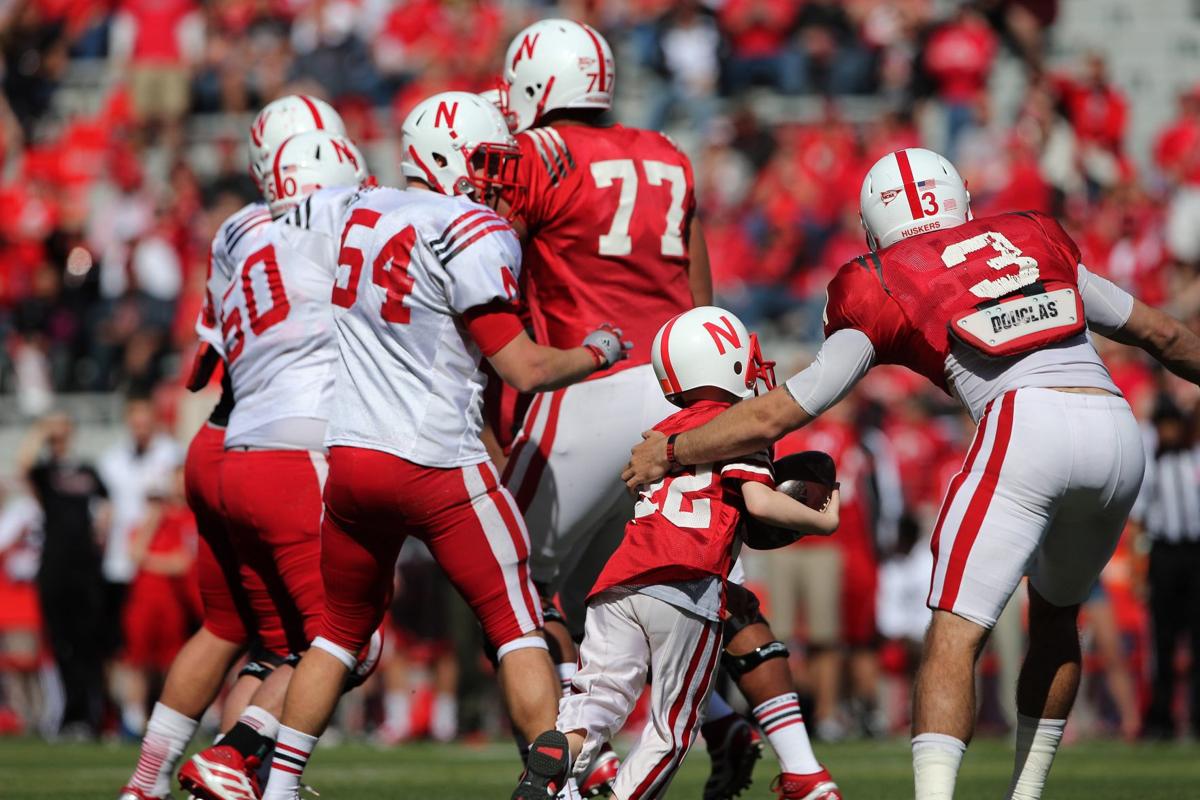 Jack Hoffman became a household name to Husker fans after running for a 69-yard touchdown during the Huskers' spring game in 2013.

Andy Hoffman, the Nebraska dad propelled to prominence after his young son, afflicted with cancer, ran for a touchdown at a Husker spring game, has died.

Hoffman, 42, died Monday morning. He suffered from glioblastoma, an aggressive brain cancer. He was diagnosed in July after he became ill while jogging. Although he also contracted COVID-19 this winter, he received treatment for it and had no symptoms after about five days, the family posted on Team Jack’s website. The cancer, however, spread, and he declined rapidly in February.

His passing was announced by Team Jack, the charitable organization he and his wife, Brianna, had launched to fight pediatric brain cancer.

“Andy was our fearless leader who loved his family with all his heart,” Team Jack said on Facebook. “His tenacity for fighting childhood brain cancer is how he met every challenge including his own fight with brain cancer.”

We are deeply saddened to share that our co-founder, @andrewjhoffman, passed away this morning from glioblastoma. Andy was our fearless leader who loved his family with all his heart. Andy, we love you & we promise to honor your legacy by fighting harder than ever for kids. pic.twitter.com/EQdYmtqsvB

The Hoffman family has endeared itself to Nebraskans over the years, first as they shared news of son Jack’s battle with brain cancer, and then, after Andy Hoffman’s unbelievable diagnosis. Father and son had different types of brain cancer, but both illnesses were devastating in their toll. Son Jack is now a 15-year-old freshman at West Holt High School. He continues to battle glioma and is in a clinical trial.

About 10 days ago, Brianna Hoffman talked of the family’s struggle on Team Jack’s website.

“This is such a horrible disease,” she wrote. “Even though Andy’s diagnosis was seven months ago, we are still in denial that this is happening. We are, however, grateful for the past seven months as we are thankful for each day that God gives us together here on earth, and for how he has used Andy to advocate for children ...

“Thank you to everyone that continues to pray for Andy and our family, bring food, transport us to Mayo, drive by and honk, help with our kids, send cards and gifts … the list goes on and on. We are so grateful for our family and friends, who are always there for us.”

COVID puts Andy Hoffman's battle with cancer in a 'tailspin'

The Hoffmans’ son Jack first became ill in 2011 at age 5 when life-threatening seizures sent the family on a cross-country odyssey for medical treatment.

Two years and two surgeries later, Jack burst into the national consciousness with a heartwarming touchdown run during the Huskers' annual spring game. Quarterback Taylor Martinez handed the ball off to Jack, who went on a tear down the field. The Husker bench cleared, and beaming, hulking Husker players followed in his wake.

“The Run” earned Jack a 2013 ESPY Award for Best Moment in Sports, and the video has received nearly 9 million views on YouTube, according to Team Jack.

It also landed the young Nebraskan and his family in the White House for a meeting with then-President Barack Obama.

Jack Hoffman had become connected with the Huskers through his then-favorite player, Rex Burkhead. On Monday, Burkhead posted on Instagram:

“God gained an unbelievable soul in heaven today. ... It was a blessing to see Andy’s attitude to make sure his family lived life to fullest thru the amount of energy and love he poured into them. He was a man of his word and if there was something he wanted to do he was going to do it.”

As news of Hoffman’s passing spread Monday, others also shared their thoughts.

“An angel on earth,” one woman tweeted.

“If everyone put out the effort to make a positive difference like (Andy) Hoffman did, we would be living in an amazing and uplifting world,” another person tweeted.

On its official Twitter account, the Nebraska Huskers tweeted: “The run touched us. The cause united us. The fight inspired us. We are heartbroken to lose Andy and send all our love to the Hoffman family.”

“Nebraska will always remember Andy’s work helping to raise awareness of pediatric brain cancer, and his own fight over the last several months,” Ricketts said.

“He was also an amazing advocate for curing pediatric brain cancer, the horrible disease that impacted his son Jack and affects too many other American families,” Fischer wrote. “We are heartbroken that Andy is gone.”

Survivors include his wife, Brianna; and children, Jack, Ava and Reese.

Last fall, Hoffman released a book about his son’s cancer, “Yards After Contact.” He described the book as his “last hurrah” and said proceeds will go to research.

“I’m hoping this can be my final dig at brain cancer,” Hoffman told The World-Herald at the time. “Research is how we’re going to beat this disease. When I think about kids going through this, it breaks my heart.”

The co-founder of the Team Jack Foundation said "research is how we're going to beat this disease. When I think about kids going through this, it breaks my heart."

Andy Hoffman's son, Jack, touched thousands of lives during his own battle with brain cancer thanks to a moment during Nebraska's spring football game in 2013.

Andy Hoffman was the guy next door. He was a small-town Nebraska man who was given the ball and asked to plunge through the line and fight for an opening and run for pay dirt.

Back in the day, April 6, 2013: Jack Hoffman runs 69 yards for a touchdown in Husker spring game

Jack Hoffman became a household name to Husker fans after running for a 69-yard touchdown during the Huskers' spring game in 2013.