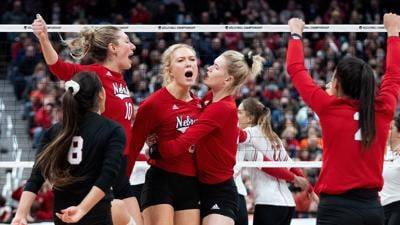 Even by Lexi Rodriguez standards, the play was laughably impressive.

Last November, Penn State volleyball visited the Devaney Center in Lincoln to face Rodriguez’s Huskers. During the opening point of the second set — one of the season’s best rallies — a Nittany Lion setter dump looked like a certain kill. Two desperate Huskers saved the ball momentarily, but it was quickly traveling the wrong direction.

That’s when Rodriguez, like some sort of teenage superhero, entered the scene. She dashed toward the baseline, dove away from the net and, with one hand, threw an uppercut, smacking the ball over her head — and across the net — as she somersaulted across the floor.

The Nittany Lions eventually won the point, but the Husker crowd roared anyway. Even Penn State’s bench applauded the effort.

“That might have just blown the roof off the place,” BTN play-by-play man Larry Puteney said.

Nebraska’s flagship sport is no longer football, it’s volleyball, where the Huskers and Jays compete for national titles. Where several smaller college programs do, too. Where you can barely track all the Division I recruits in a given year. That’s the good news.

The bad news is the state’s chief sporting export can’t break into the mainstream. At the world level, the Americans are coming off an Olympic gold medal. At the high school level, volleyball participation is No. 2 nationally — behind only track and field. No women’s sport has grown more since Title IX, jumping from 17,952 participants in 1971 to 452,808 in 2018.

You wouldn’t know it scrolling your TV guide.

You don’t see ranked volleyball teams on SportsCenter every night — not even the ESPN BottomLine. You don’t see a national volleyball game of the week on NBC or CBS. You don’t even see the entire NCAA tournament available on TV. The Huskers could be as prominent in sports media as Tennessee or UConn women’s basketball.

But volleyball in America, aside from a few hot spots like the Big Ten Network, is relegated to the fringes. From a media standpoint, “it’s still nowhere,” said Kathy DeBoer, executive director of the American Volleyball Coaches Association.

As a (biased) Nebraskan, this truth has long baffled me. How can a sport featuring a jaw-dropping medley of skill, size, quickness, power, grace, teamwork, momentum swings and fast pace — like the sports equivalent of the E Street Band — fail to grab ahold of America’s sports attention?

“It has all the things necessary to be really, really popular,” DeBoer said. “Long, attractive, athletic women. Great plays on offense and defense. The action moves really fast. These are all the things that television loves. If people knew what was happening, I’m convinced there’d be a lot more of it on TV.

In March, reigning national championship coach Kelly Sheffield opened a vein and called attention to the discrepancy between NCAA women’s basketball coverage and women’s volleyball. He called it a “slap in the face.”

"We are seeing how people are responding positively to women's basketball, and let's get the same type of exposure for women's volleyball and watch what happens," said Sheffield, emboldened by the volleyball-record 1.188 million ESPN2 viewers who watched Wisconsin beat Nebraska for a national title.

Last week at Big Ten media days, Nebraska coach John Cook chimed in, pointing responsibility not at TV executives, but at their partners.

“We’re setting a new standard here (in the Big Ten) for volleyball. The NCAA needs to follow. The NCAA controls ESPN and how they televise that. So this should be a stepping stone, like, hey, volleyball is here and we need to keep growing it.

“Instead of nickel and diming it, which they’ve been doing in the past.”

Before examining the present predicament, it’s worth stepping back in time to see the impact of television on a smaller scale. To October 1980, when Husker volleyball, seeking its fifth straight Big Eight title, hosted Oklahoma.

Nebraska Educational Television covered the action — its first-ever volleyball broadcast. Soon NET became the first station in America to cover volleyball games on a regular basis, stretching from Omaha to towns like Ogallala, where Angie Oxley grew up. Before she helped the Huskers win a national title in 2000, NET broadcasts sparked Oxley’s dream.

“You can see how that helped to build interest in the program,” Oxley said years ago.

Terry Pettit, the godfather of Husker volleyball, recalls then-Texas coach Mick Haley telling him that NET’s excellence — and its willingness to show the electric NU Coliseum crowd — made Big Red a hot ticket.

“People wanted to be there because they saw people they knew,” Pettit said.

Forty years later, the Huskers have grown into an even bigger juggernaut. And the Big Ten has fallen in love with volleyball, too. But almost everywhere else? Stuck in 1979.

“The Big Ten has emerged as the premier conference,” Pettit said last week. “You can’t do that if you aren’t the premier television conference. Some of the conferences have been really, really bad.”

It’s representative of a larger problem. Few have studied it harder — or engaged in more discussions — than the AVCA’s DeBoer.

Historically, sports consumers are overwhelmingly male. So are the people operating those sports. They didn’t grow up playing volleyball. And, more importantly, volleyball didn’t have a popular male counterpart educating the public and promoting the game.

“You get a huge amount of exposure on the women’s side because of that,” DeBoer said.

“The NCAA has selected women’s basketball as the winner among women’s sports,” DeBoer said. “Part of that is because men’s basketball is such a super winner at the NCAA. It funds the whole operation. It’s the billion-dollar contract. It’s March Madness.”

Women’s basketball isn’t the enemy, DeBoer said. But you need the power brokers — the NCAA, the conference commissioners, the athletic directors — to invest in women’s volleyball like they have women’s basketball. Simple economics suggests there’s potential.

Historically, roughly 75% of sports viewers are men. It’s even higher for women’s sports, ironically. But women’s volleyball is 47% female, DeBoer said. The possibilities should intrigue the networks, DeBoer said.

“One of the most remarkable things is where women’s volleyball is given no male counterpart. The other sports in that situation, like gymnastics and field hockey, they have 60 Division I programs. Women’s volleyball has 335. That is a testament to the appeal of the sport. But how do we translate it to sports media? We need investment.”

Hope arrived this past week, not from the NCAA or ESPN or Amazon or Hulu, but internationally.

The Big Ten announced a partnership with Volleyball World, where at least 70 games will be televised overseas. Even more games will be streamed live outside of North America. The network wanted American inventory. It wanted the Big Ten.

“This is massive,” Wisconsin’s Sheffield said. “I don't think this can be underestimated how important this is to not just the Big Ten but to our country. ... It’s hard to articulate what this could be five, six, seven, 10 years down the road.”

Cook, he said, is still “trying to wrap my head around it.” He knows the sport is huge internationally — several former Huskers play professionally across the globe.

Worldwide broadcasts could vastly enhance Big Ten brands (not to mention expanding their recruiting footprint). It’s not crazy to wonder if Husker volleyball could soon generate more TV viewers in China or Turkey than it does in America.

In other words, we’re a long way from NET in Ogallala.

Pettit, who’s always had a broader worldview than a volleyball court, can go and on about the game’s compelling virtues.

How a winning team can’t run out the clock, it must finish its opponent. How the net places a premium on quickness and timing, TV-friendly skills. How the sport highlights power and explosiveness, but not in a brutish way. Look at Nebraska’s roster. They look like 400-meter runners, Pettit said.

Then it’s the compilation of different talents and the versatility it demands: digging, passing, setting, blocking. “Rotation is what truly makes the game unique,” Pettit said.

It’s all contained in a very intimate space — 900-square feet. “It’s almost like you’re watching it on a stage.”

That’s what I remember from 20 years ago. Watching my first matches at the NU Coliseum as a UNL sophomore — a Daily Nebraskan reporter. Specifically, I remember the ceaseless tension of NCAA tournament matches. The series of gasps on set points. It was different.

Ideally, you could drop the casual sports fan in the 10th row as Nebraska and Wisconsin exchange haymakers. People would see the light, right? It’s astounding that they don’t already.

The beauty of Title IX, Pettit said, was that it disrupted complacency. It produced friction. And friction led to innovation. But it’s not over.

“Title IX isn’t something you just have and you’re done with it,” Pettit said. “Just like civil rights. ... You better run through the tape on Title IX every day.”

It takes people to keep rocking the boat. It takes the sport’s leaders to strive and think boldly, like Lexi Rodriguez did that November night when she hurled her body across the floor for a ball she never should’ve saved.

“Things only happen when people take risks,” Pettit said. “We only get progressive when people are willing to create a disturbance.”

Looking back at the last five seasons of Nebraska volleyball

Nebraska volleyball must get veteran, newcomers on same page at middle blocker

John Cook a little surprised with Nebraska's No. 1 preseason ranking

John Cook said a case could be made for several teams at the top, including Wisconsin, Texas and Louisville. “There are so many good teams, and nobody is going to roll through this thing."

Aaron Rodgers has his say on the NFL's greatest ever coach

Aaron Rodgers has his say on the NFL's greatest ever coach 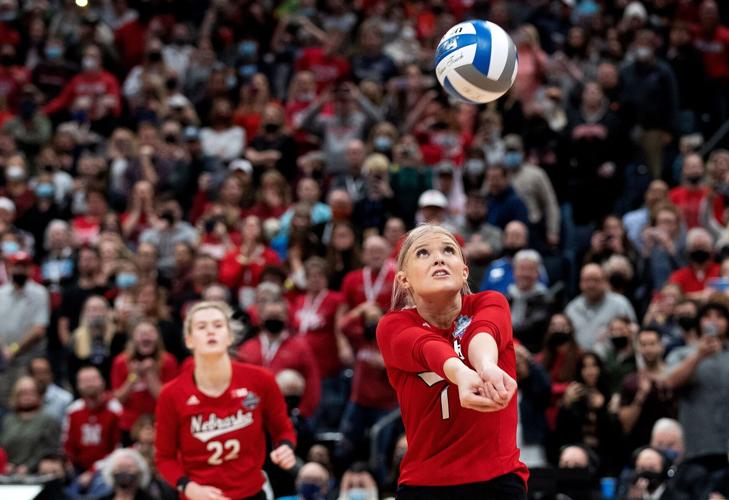 As a (biased) Nebraskan, this truth has long baffled me, writes Dirk Chatelain. How can a sport featuring a jaw-dropping medley of skill, size, quickness, power, grace, teamwork, momentum swings and fast pace — like the sports equivalent of the E Street Band — fail to grab ahold of America’s sports attention? 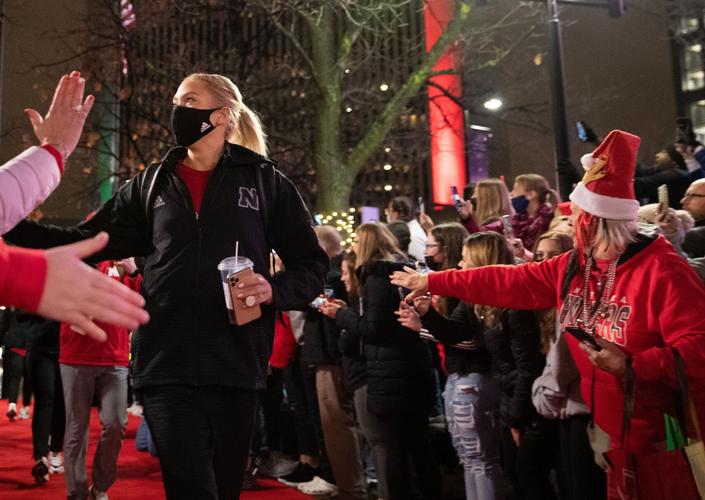 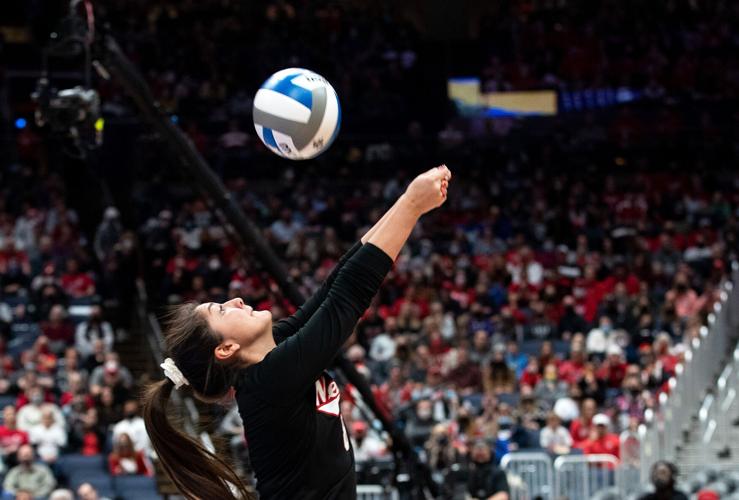 Nebraska's Lexi Rodriguez passes the ball during the national championship match against Wisconsin. She was named a first-team All-American her freshman season (2021).

Title IX at 50: Throughout the summer, The World-Herald will have a multipart series on the 50th anniversary of Title IX, remembering the achievements of women in sports while examining the barriers that still remain to equality under the law 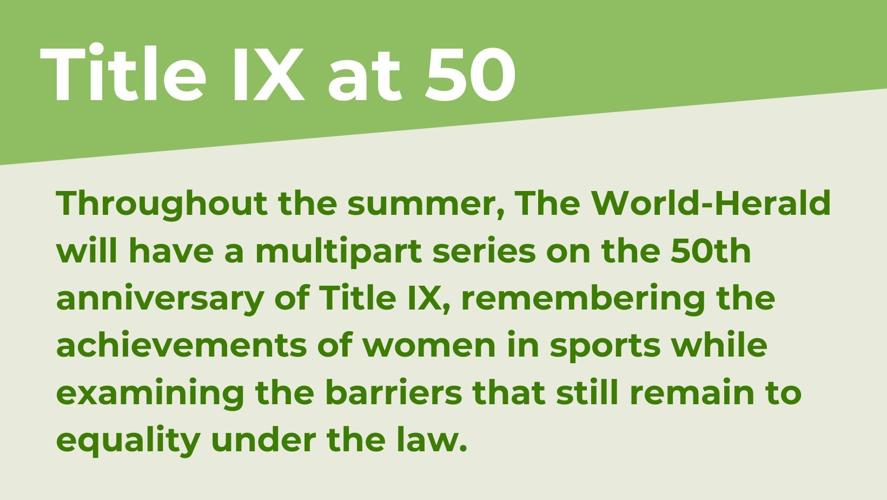