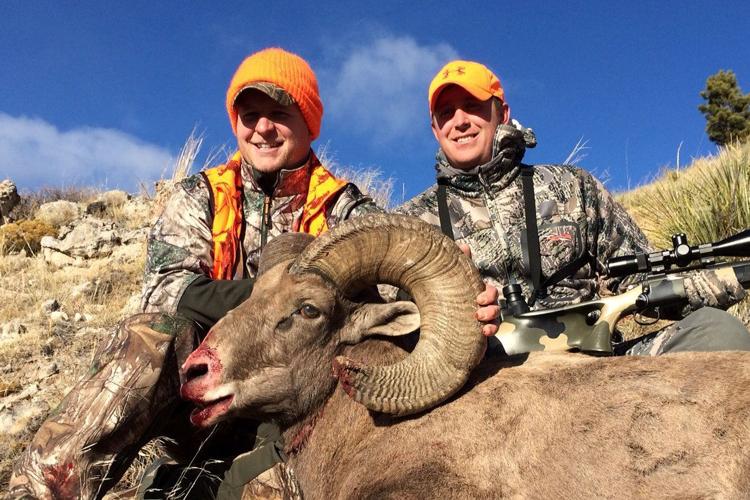 Brett Roberg, left, and Josh Johnson saw this bighorn sheep shortly after starting their hunt. They opted to let it go, tracking it and eventually bagging it the next day. It was the state’s only bighorn tag of the year. 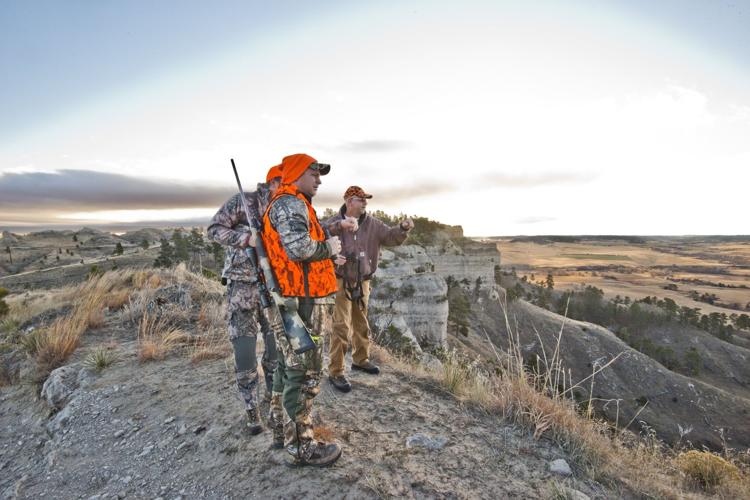 Brett Roberg, in orange, while hunting for his bighorn sheep atop the Cheyenne Buttes at Fort Robinson State Park. 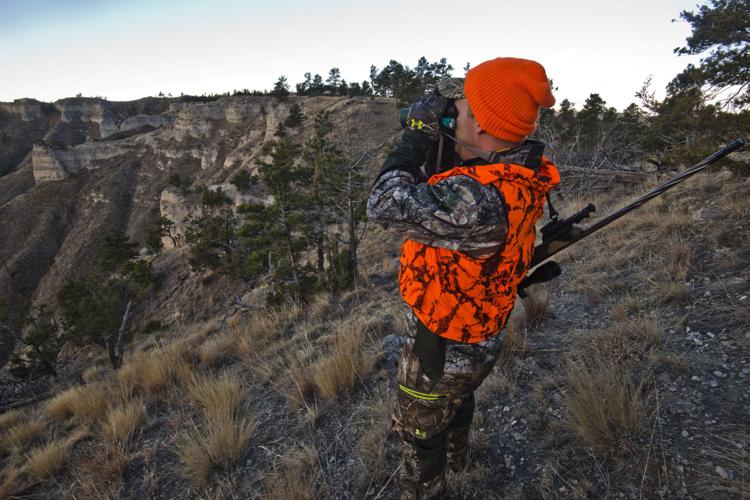 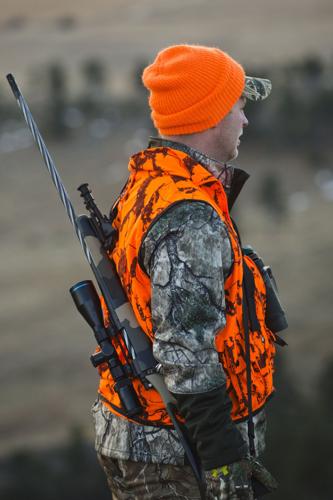 Brett Roberg’s first bighorn sheep hunt could have been over in minutes.

But he had no interest in a point and shoot.

Instead of taking a shot at the big ram after wildlife biologist Todd Nordeen pointed it out to him and cousin Josh Johnson when they arrived at Fort Robinson State Park, he opted to wait until the next day.

“I actually had to work for him pretty hard,” Roberg said. “Hiking up the buttes and just trying to track him.”

On Monday, he finally killed the Rocky Mountain bighorn ram, which was 10 years old. It unofficially scored at 166.

Quite a difference from the upland game and waterfowl that Roberg is usually chasing.

“This is my first big game animal I’ve been able to harvest,” he said.

Roberg, from Holdrege, is a fisheries biologist for the Nebraska Game and Parks Commission who works on cold water streams. He helps out at the check stations during deer season, so he doesn’t get much chance to harvest anything other than birds.

He’s been applying for $25 bighorn sheep and elk tags for several years. He thought it would be a cool opportunity.

But when he actually got the call, saying that his name had been drawn from 2,593 entries for the only permit in 2016, he couldn’t believe it.

“I thought someone was playing a prank on me for a while,” he said.

But it was true, and he has the new equipment to prove it. He couldn’t resist a stop at Cabela’s in Sidney as long as he was out west.

Nordeen, who oversees the sheep herds, kept Roberg up to date on the animals before the hunt. He and his technicians try each week to visually monitor every one of the 320 sheep that reside in areas of the Pine Ridge, between Harrison and Chadron, and the Wildcat Hills, south of Gering and east to McGrew.

Only one permit was issued, and no auction was held for a second tag because there weren’t enough rams.

He thought the ram that Roberg eventually shot would be a good candidate. It was older, and had surprisingly just shown back up in the herd after an absence of a few years. Nordeen and his staff had thought it had been killed by disease or a mountain lion.

After passing up the shot on Sunday when he arrived, Nordeen assured Roberg they’d see the ram the next day, and they did.

But he kept slipping away. After a frustrating and exhausting morning, Roberg had decided to shift his attention to another ram when it appeared, chasing a couple of ewes up a draw.

“I took a shot from 250 yards and dropped him,” Roberg said. “I think it worked out about as perfect as I ever envisioned.”

He used a 7-millimeter STW rifle he borrowed from a friend.

Roberg is heading out west again. His wife, Karissa, has drawn a cow elk tag, and they’re hoping to get that filled.

It will be hard to top his sheep hunt, as demanding as it proved to be for Roberg. He said it was everything he hoped for and more.

“I’d do it all over again if I could,” Roberg said. “It’s a once-in-a-lifetime opportunity.”

Winterfest is officially underway. Now through April, state parks across Nebraska are celebrating the season through more than a dozen festive…

Hunting enthusiasts still have the chance to purchase lifetime permits and stamps before new pricing goes into effect Jan. 1.

Eastern Nebraska habitat doesn’t lend itself to some big fish

The Nebraska Game and Parks Commission will burn tree piles, as weather and snow cover allows, at several sites across the state.

Girls afield no longer a rarity

The number of girls under 18 who bought a deer permit this year (3,500) has more than doubled since 2008, Game and Parks figures showed.

Tyler Nichols was presented with a $15,000 Action Trackchair by the organization Friends in Service of Heroes.

The Central Nebraska Public Power and Irrigation District has resumed pumping operations into Elwood Reservoir as part of efforts to utilize excess flows in the Platte River for groundwater recharge in and adjacent to Central’s irrigation service area.

Anglers should be aware of ice conditions

The Nebraska Game and Parks Commission warns ice anglers to use extreme caution when venturing onto the ice.

Harlen Grosskop and cousins Brett and Brandon Mainquist decided to see a new part of the country, so they went hunting for big boars in the Cumberland Plateau area of Tennessee.

Mountain lions are strongly suspected of having killed five bighorns between June 2016 and March — and nine since 2015 — in western Nebraska, according to Sam Wilson, the commission’s carnivore program manager.

Tunisia our inspiration says USA captain ahead of Netherlands match

Tunisia our inspiration says USA captain ahead of Netherlands match

Brett Roberg, left, and Josh Johnson saw this bighorn sheep shortly after starting their hunt. They opted to let it go, tracking it and eventually bagging it the next day. It was the state’s only bighorn tag of the year.

Brett Roberg, in orange, while hunting for his bighorn sheep atop the Cheyenne Buttes at Fort Robinson State Park.