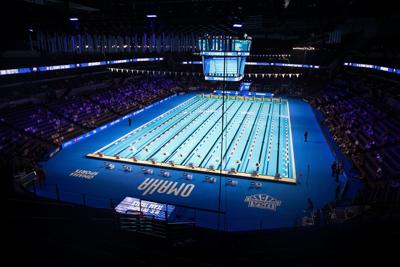 The constellation of swimming stars is perpetually evolving. New stars replace ones that are fading or have relocated to nearby alumni clusters where they continue to flicker.

No star has ever shined brighter in the aquatic galaxy than Michael Phelps.

But Phelps won't be wearing Team USA gear next month at the Tokyo Olympics.

That’s a big reason why this year’s Swim Trials at CHI Health Center likely will have a larger than usual dose of new stars, male and female, appearing on the medal stand the next eight days.

There’s more star power on the women’s side — Katie Ledecky, Lilly King and Simone Manuel, for starters — but there’s also plenty of room for a new group to help keep the U.S. on top.

In the men’s competition, there’s a mix of old guard and young guns who have been waiting for their chance to step up and lead. Some have Olympics experience, others don’t.

But they all realize that past performance is not an indicator of future results. That’s what makes the Trials so intriguing. So many races will be close, leaving potential Olympic berths difficult to predict even with 50 meters or less to go in the finals.

Names you’ve not heard before could be in the lexicon of Olympic legend by Aug. 1.

To get a better idea of who to look for during the Trials, we found some inspiration from an original boy band whose name ideally suits this meet — New Kids on the Block.

Just add an "S" and "ish" to their name and take a few minutes to learn about some of the Newish — and a few of the old school — Kids on the Blocks. Some of NKOTB’s biggest hits made ideal categories in which to place a few of these contenders.

These five may be taking their last shot at earning an Olympic berth. Or, considering their dedication to the sport, maybe not.

That Ervin, Adrian and Grevers are best in shorter events bodes well for a potential return in 2024. Ervin made the team in 2016 as a 35-year-old in the 50 freestyle, so he should never be counted out until he says he’s done.

While Grevers also is entered in the 50 and 100 free, his race is the 100 backstroke. He is a two-time Olympian (2008 and 2012) and narrowly missed a third consecutive trip after finishing third behind Ryan Murphy and David Plummer in the 2016 Trials.

Grevers has been a fan favorite since his first appearance in 2008. He was one of the few Olympians to come to town early and compete in the 2012 Swimvitational, a pre-Trials warmup for the big event the next week.

Shields prefers short course but has become one of the most dependable 100 fly talents on the national team. The quintessential California kid is seeded one spot higher (sixth) in the 200 fly than he is in the 100 fly.

The 100 fly field is one of the deepest men’s events, with names like Caeleb Dressel, Michael Andrew, Ryan Murphy and Ryan Held. Only Dressel and Maxime Rooney have seed times below 51 seconds.

In the past 2½ years, Adrian has had myriad life experiences. He recovered from testicular cancer, won medals at the world championships and Pan American Games and welcomed a daughter into the world.

Then there’s Lochte, another crowd favorite whose ups and downs have been well-documented. He’s trying to reach his fifth Olympics, and his best chance seems to be the 200 individual medley where he’s seeded fifth.

All three won medals at the 2016 Games but will face strong challenges to make the Tokyo team.

Margalis earned her first gold as a member of the 800 freestyle relay team and narrowly missed the medal stand with a fourth-place finish in the 200 IM. She enters these Trials seeded third in the 200 IM and first in the 400 IM.

Smith is the distance freestyler who has stayed the closest to Ledecky. She won a bronze medal in Rio in the 400 freestyle, gold in the 800 free relay and touched sixth in the 800 free. She is seeded second in the 400 and 800, seventh in the 200 free and eighth in the 1,500 free. Smith also is entered in Sunday’s 400 IM and is seeded fifth.

These five are seeking their first Olympic berth. Andrew has been a force the past nine years, when he elected to turn pro at 14, passing on any chance to compete in high school or college.

The 2016 Trials were probably a bit early for Andrew, whose best finish was fourth in the 100 breaststroke. This seems like the best time for the charismatic Andrew to step into a leadership role, along with Dressel, for the U.S. in Tokyo.

Andrew is seeded second in three events — the 100 breaststroke, 200 IM and 50 freestyle. He’s within striking distance of cracking the top two in the 100 butterfly (fourth) and 100 backstroke (fifth), and is 24th in the 100 freestyle.

Finke and Grothe are emerging distance freestyle stars. Grothe is the leading qualifier in the 400 free, second in the 1,500 free and third in the 800.

The 800 is a new Olympic event for men after the 1,500 was added to the women’s program. Finke leads all qualifiers in the 800 and 1,500 freestyle. He leads Grothe by nearly five seconds in the 1,500 and just over two seconds on Jordan Wilimovsky in the 800.

Urlando also has a significant lead over the rest of the field in the 200 IM. The Georgia sophomore is at 1:53.84, with Zach Harting of Cardinal Aquatic in Kentucky second at 1:55.26.

All four already have had a big impact on the international stage but have yet to compete in an Olympic Games.

Smith set world records last year at the world championships in the 100 and 200 backstroke. Her 100 record came as the leadoff swimmer on the 400 medley relay. She is seeded first in both backstroke races, second in the 200 butterfly and fifth in the 100 fly.

Curzan is a 16-year-old from North Carolina who burst onto the scene earlier this year by setting the U.S. Open record (56.20) in the 100 butterfly. That time puts her as the No. 1 seed in that event. She’s also No. 2 behind Simone Manuel in the 50 freestyle and sixth in the 100 backstroke and 100 free.

"You Got It (The Right Stuff)"

This foursome has had Olympic success, and all are expected to be in contention for trips to the medal stand in Tokyo.

Dressel is the swimmer most expect to take the mantle of best all-around American male. All that’s missing from his résumé are signature performances in the Trials and Olympics.

Held won his first Olympic gold medal five years ago as a member of the 400 freestyle relay team. He enters this meet second in the 100 free and third in the 50 free. He’s also 16th in the 100 butterfly and 28th in the 200 free.

This is the trio that currently defines the U.S. team.

The world has never seen a better female distance swimmer than Ledecky.

King stared down and defeated Russian breaststroker Yuliya Efimova, who twice was suspended for using performance-enhancing drugs, to win her first Olympic gold in the 100 in Rio.

Dare you to find anyone who won’t be rooting for the ultimate teammate Schmitt to make her fourth Olympic team. She has been to the past three Olympics and come home with eight medals, including four golds.

World-record holders and emerging stars in the swimming world are in Omaha for Wave II of the U.S. Olympic Swim Trials.

The Wave I meet, which wrapped up Monday night at the CHI Health Center, was just a taste of the action. Now Omaha is ready for the main event of the U.S. Olympic Swim Trials.

A decade ago, the swimming program at Navy put a concerted effort into getting more swimmers qualified for the Olympic Trials. And it has paid off.

Elkhorn South grad Ryan Patterson may have come to the sport later than most. But the progress he made since he began swimming full-time put him in elite company as a U.S. Swim Trials qualifier.

Welcome back to Omaha, Ryan Lochte. His path to a fifth Olympic berth will not be easy, and his best chance at U.S. Swim Trials the will come in the 200-meter individual medley.

After wins in the 2012 U.S. Swim Trials and Olympics, expectations for Katie Ledecky permanently changed. She hasn't disappointed and has morphed into the greatest female distance swimmer in history.

Beideck: Predicting winners of the US Olympic Swim Trials

Over the next eight days, we will discover just how prepared the next team of U.S. swimmers are with a month to go before the Tokyo Olympics. Steve Beideck predicts who those Olympic swimmers will be.

Michael Phelps brought US swimming into the mainstream. Now who will take his place?

Michael Phelps single-handedly elevated U.S. swimming. Now that the most decorated Olympian has retired, who will step up and take that leadership role for the sport?

Clearing his mind of doubt and fear on this trip to Omaha allowed Michael Andrew to do something Sunday morning that he has dreamed about since turning professional eight years ago: celebrate. 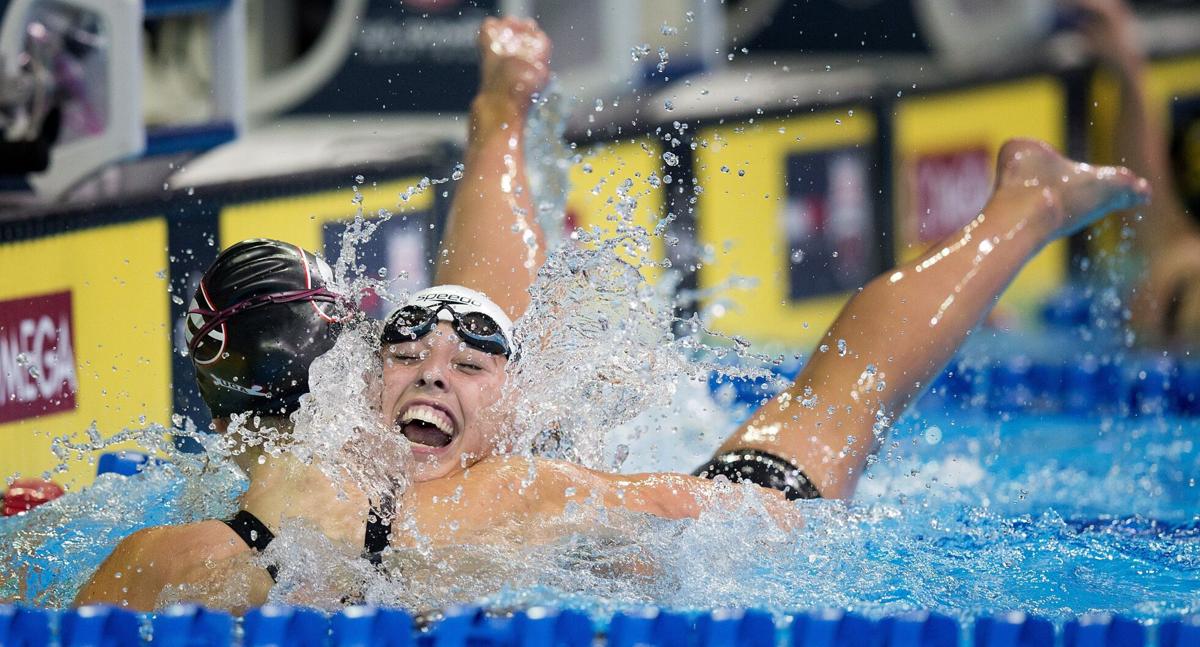 Kathleen Baker smiles and hugs Olivia Smoliga after the two made the Olympic team in the women's 100-meter backstroke during the 2016 U.S. Olympic Swim Trials. 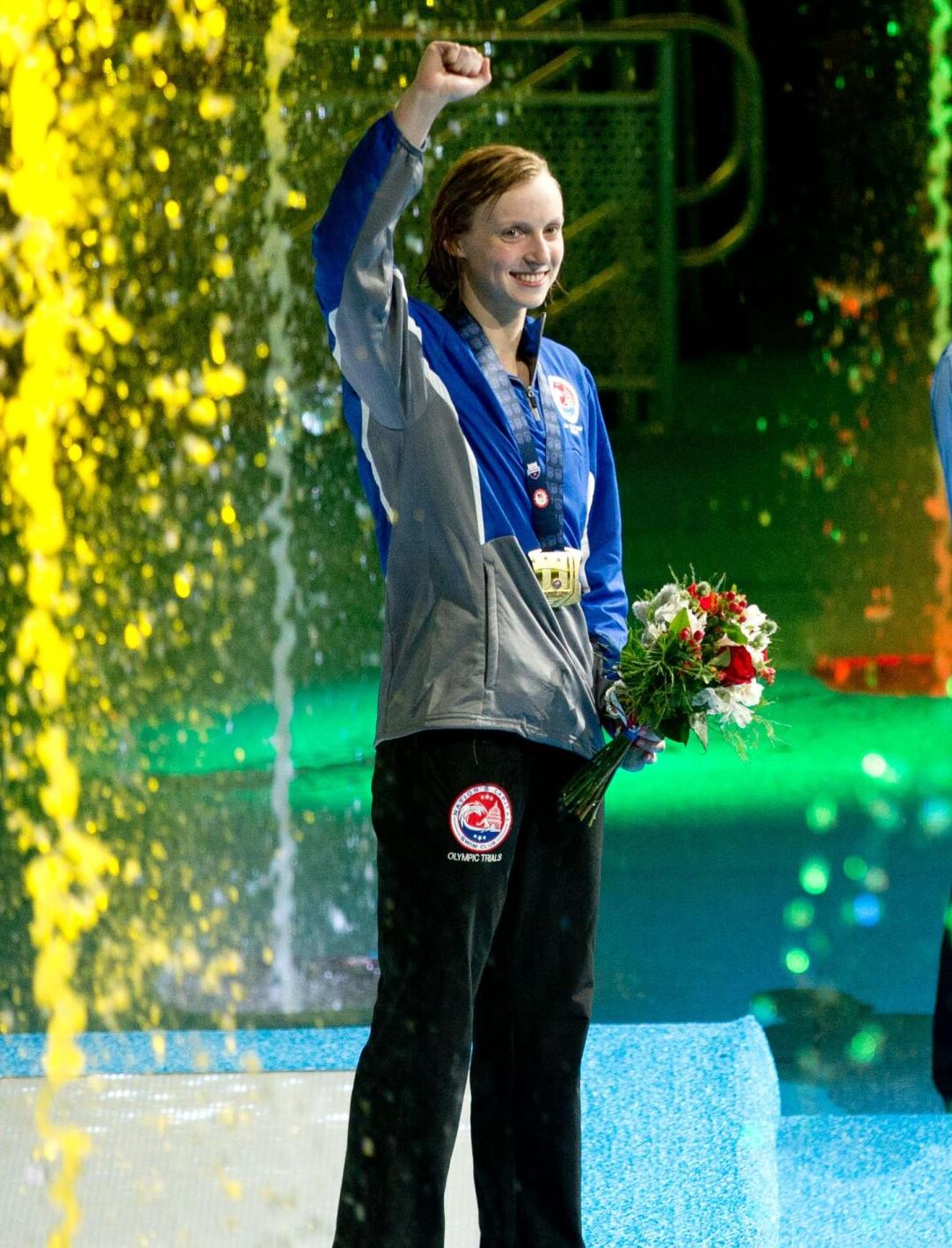 Katie Ledecky throws a fist in the air during the medal ceremony for the women's 400-meter freestyle during the 2016 U.S. Olympic Swim Trials.