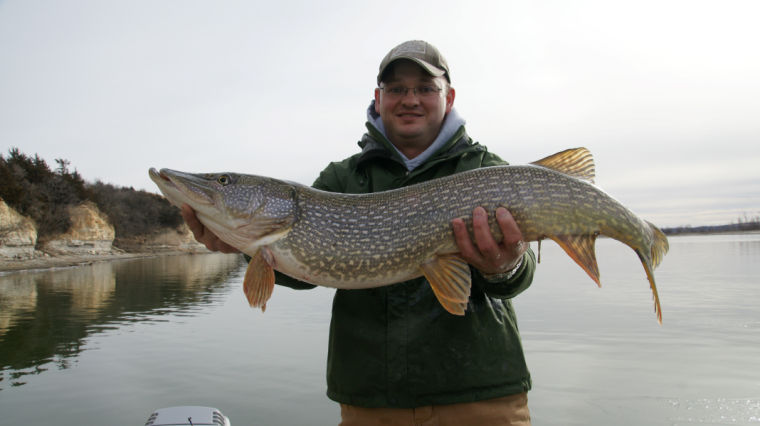 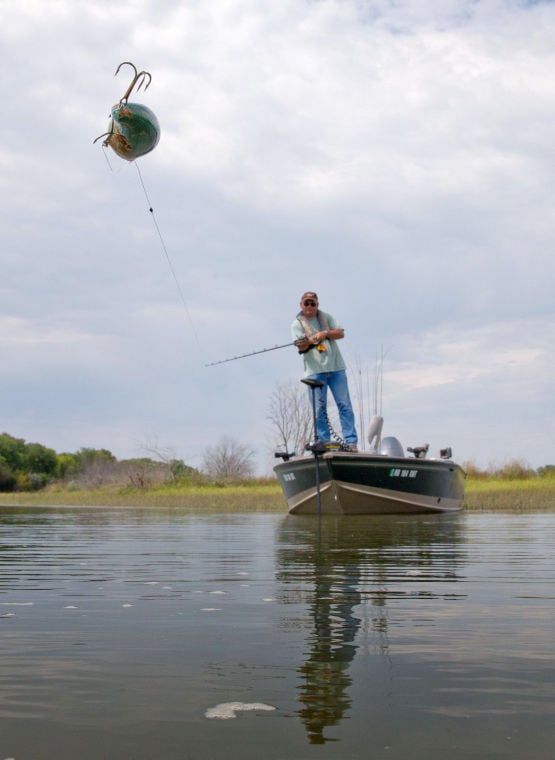 Brad Huston throws his 3¾-ounce bluegill lure in the backwaters during a guided fishing trip on the upper Missouri River, a wild unchannelized section of the river near Verdel, Neb. Even smaller fish are attracted to the lure, but big fish go nuts for the hand-sized lure. 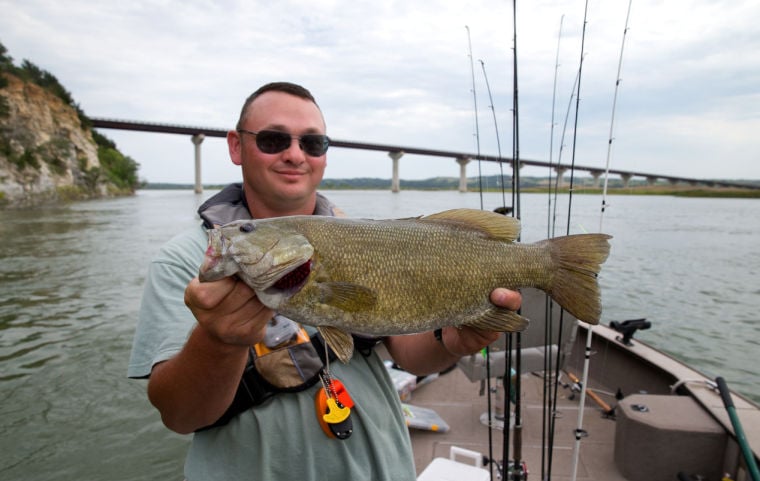 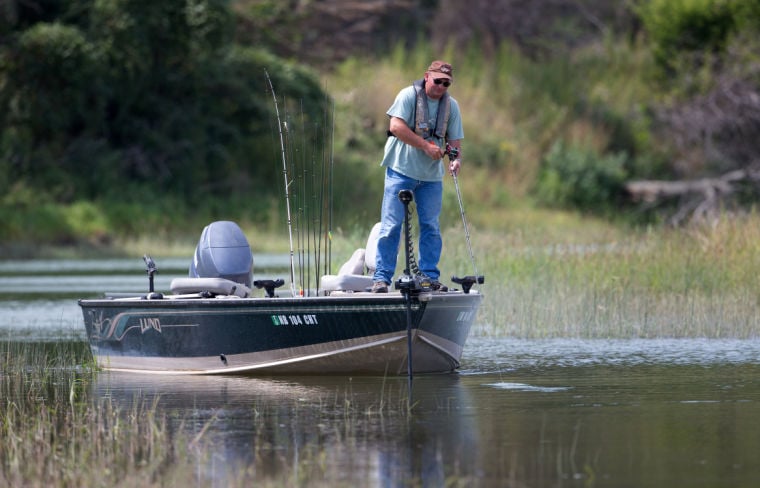 Huston fishes the backwaters during a guided fishing trip. 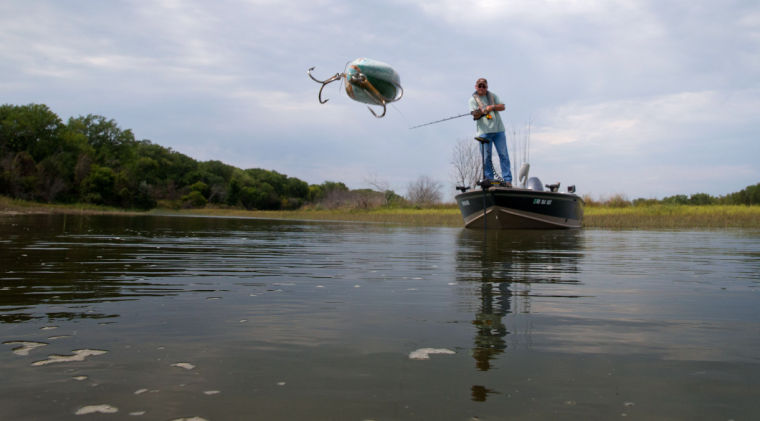 Brad Huston throws his 3¾-ounce bluegill lure in the backwaters during a guided fishing trip on the upper Missouri River, a wild unchannelized section of the river, near Verdel, Neb. The homemade lure is so big that most fishermen would love to catch a bluegill that size.

VERDEL, Neb. — While in Bosnia and Iraq with the Nebraska Army National Guard, Brad Huston thought a lot about fishing.

He saw trout in the rivers near Srebrenica, Bosnia, while fighting with the Alpha 1-167th Cavalry out of Hastings.

In Iraq with the 1075th Transportation Company, he heard tales of soldiers fishing for koi at Camp Victory in ponds built by Saddam Hussein.

“I didn’t miss fishing until I couldn’t do it,” Huston said.

After 21 years of service, the staff sergeant decided to retire.

Now, if he isn’t fishing or guiding, he’s handcrafting his own lures and spending time online chatting with fishing enthusiasts.

“I was hooked,” Huston said.

In 2010, Huston took a fishing trip to the upper Missouri River, near Niobrara, Neb. The 50-mile stretch captured his imagination.

“It looks almost the same now as when Lewis and Clark came through here,” Huston said.

Huston has earned so many Nebraska Master Angler certificates that he could almost wallpaper his house with them. He was contacting Daryl Bauer of the Nebraska Game and Parks fisheries division so often that Bauer suggested he just email him the information instead of sending them by mail.

So is Bauer, who tries to fish all the way through Thanksgiving. He said late November is a great time to catch big fish.

But when Bauer trades in his baitcaster and crank baits for ice fishing equipment, Huston is still in his boat throwing lures on the upper Missouri. The water rarely freezes there due to the current.

Even in the middle of January, Huston will climb in his boat and head out to find fish.

“As long as the water is open I’ll just bundle up and head out hoping to catch a trophy,” Huston said.

One of Huston’s favorite lures is a 3¾-ounce lipless bluegill that he makes at home. The lure is so big that most fishermen would love to catch a bluegill that size. Huston throws big bait because he’s fishing for big fish.

Bauer got a chance to see the lure while on a two-day trip with Huston in August.

“He’s caught so many fish on that lure that he needs to repaint it,” Bauer said.

The lure isn’t just for the large smallmouth, pike and walleye that haunt the stretch of the river. Huston has caught 18 species there, including rare fish in Nebraska like goldeyes and Shorthead Redhorses. The variety is one of the reasons he loves the upper Missouri.

“You don’t know what you have until you get it to the boat,” Huston said.

Huston decided in April to share his love for the upper Missouri and started guiding. He named his new company Fish Eagle Guide Service in honor of osprey and bald eagles that frequent the area.

Concentrating on big fish, Huston has his clients throw crank baits and plastics instead of the typical live bait trolling methods employed by most guides, Bauer said. And he doesn’t call it a day because his clients have their limit of walleye and sauger.

A day of fishing with Huston doesn’t end until all avenues are exhausted. And on a body of water with big and numerous fish to catch, fishing starts early and ends late.

“It’s a vast fishery that offers endless areas to explore and the conditions constantly change, making it a great challenge,” Huston said. “You have to hunt for the fish, trying even the backwaters to find them. But once you do, it’s game on.”

Some of the fishing was done in deep pools in the backwaters, sometimes just deep enough to get Huston’s 19-foot Lund through. In one of the shallows Huston jumped in the water and guided the boat through a shallow area by hand to get to a pool where he caught some huge northern pike.

Even when it started to rain, Huston wanted to try one last spot near the Standing Bear bridge just west of Niobrara.

With a square-lipped shad crank bait, a 19-inch smallmouth bass was the prize. After measuring the monster and taking a few pictures, it was released back into the river knowing that this fish, given a couple more years to grow, could be the next state record smallmouth.

Huston loves to guide and craves the challenge of putting his clients on fish that will earn them a Master Angler award. He does it so often that he carries a folder of applications on the boat.

“If I could fish every day of the week, I would,” Huston said. “Guiding gives me the opportunity to do what I love.”

These eight teams have punched their tickets to Omaha and will begin competing for a national championship later this week at TD Ameritrade Park.

Tyreke Johnson had lots of interest and a plan to explore it. But one visit to Nebraska ended his recruiting process. The former five-star recruit explains why he chose the Huskers.

After leaving Louisville last week, former Husker quarterback Luke McCaffrey has found another new school where he'll play for the coach who helped turn his older brother into a Heisman Trophy finalist.

Sam McKewon's three takes on the commitment of Richard Torres includes this nugget: Nebraska appears to be making a shift in the kind of quarterback it likes to recruit.

The Huskers were the first major program to offer a scholarship to three-star quarterback Richard Torres, and the early work paid off with his commitment to Nebraska.

Shatel: If Swim Trials move elsewhere, it's because Omaha transformed the event

A report suggested the next U.S. Olympic Swim Trials could be held in Indianapolis' NFL stadium. Tom Shatel doesn't love that idea, but if it happens, it'll be because Omaha transformed the event.

Brad Huston throws his 3¾-ounce bluegill lure in the backwaters during a guided fishing trip on the upper Missouri River, a wild unchannelized section of the river near Verdel, Neb. Even smaller fish are attracted to the lure, but big fish go nuts for the hand-sized lure.

Huston fishes the backwaters during a guided fishing trip.

Brad Huston throws his 3¾-ounce bluegill lure in the backwaters during a guided fishing trip on the upper Missouri River, a wild unchannelized section of the river, near Verdel, Neb. The homemade lure is so big that most fishermen would love to catch a bluegill that size.