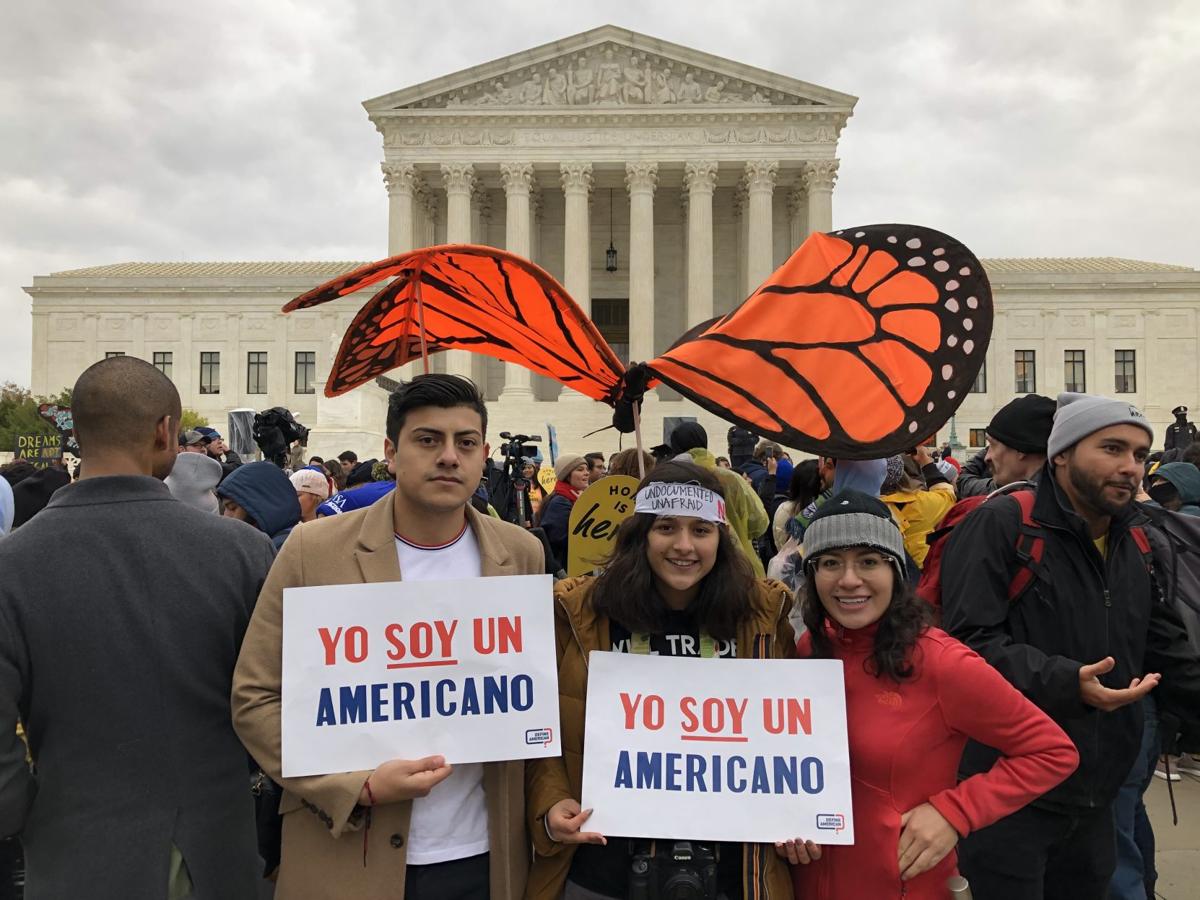 University of Nebraska-Lincoln students, from left, Jorge Marroquin, Frida Aguilera de la Torre and Fatima Barragan-Herrera at a rally outside the U.S. Supreme Court on Tuesday in support of the Deferred Action for Childhood Arrivals program. The English translation of their signs is “I am an American.” 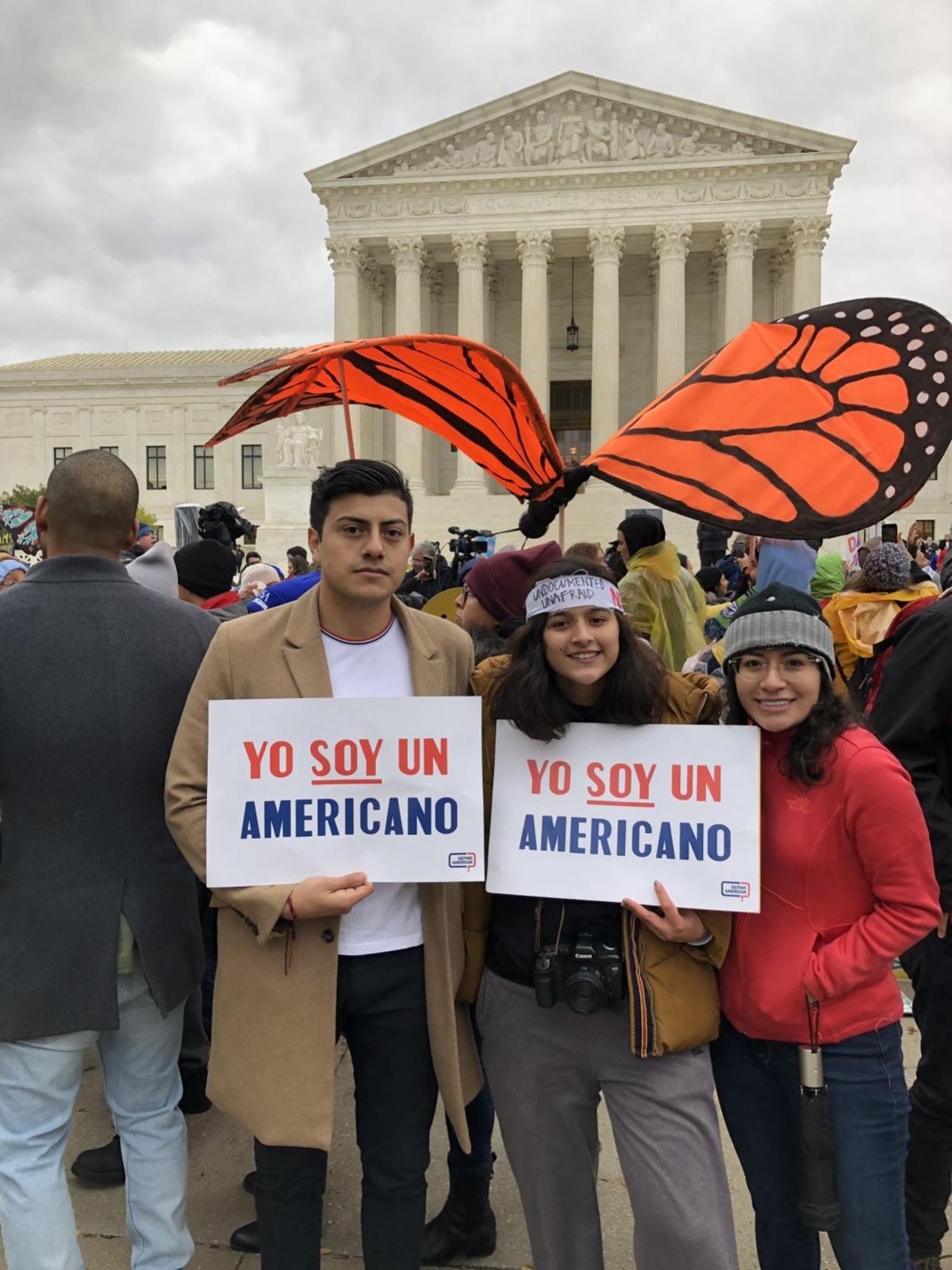 University of Nebraska-Lincoln students, from left, Jorge Marroquin, Frida Aguilera de la Torre and Fatima Barragan-Herrera at a DACA rally outside the United States Supreme Court building on Tuesday. They were there to show support for the Deferred Action for Childhood Arrivals program.

WASHINGTON — Jorge Marroquin was born in Mexico and brought to the United States at age 3 when his family settled in Nebraska’s capital city.

“I consider Lincoln my home,” Marroquin said. “Even though sometimes it doesn’t feel so welcoming.”

The 22-year-old, who is studying economics at the University of Nebraska-Lincoln, sees how immigration policy has become a political tug-of-war in the country.

He is shielded from immigration enforcement by the Deferred Action for Childhood Arrivals program, which was created by President Barack Obama.

Marroquin traveled to Washington to join a pro-DACA rally Tuesday outside the Supreme Court.

Inside the building’s high marble walls, meanwhile, the justices were hearing oral arguments on whether President Donald Trump can eliminate the program. A decision in the case is not expected until next year.

It’s a case that highlights the country’s deep divisions over immigration, particularly when it comes to those who are in the country illegally. DACA recipients, commonly referred to as Dreamers, represent individuals brought to the United States illegally when they were young.

Many have never known a home other than America and would be lost if deported to the countries of their birth.

Fellow UNL students Frida Aguilera de la Torre, 19, and Fatima Barragan-Herrera, 22, rallied alongside Marroquin and other Nebraskans who turned out on a raw November morning to show their support for the DACA program with chants and signs.

The crowd shouted along with the call-and-response of “Undocumented! Unafraid!” and waved signs supporting Dreamers.

Speakers at the podium urged participants to raise their voices so those inside the court could hear them.

Marroquin said that eliminating DACA would have a domino effect on the economy and that there is a misconception that DACA recipients are asking for special benefits.

“All we really want is just a fair shot,” he said.

In his own case, Marroquin said the program allows him to drive and work, making it possible in turn for him to pay for his own education.

“Many of the people in DACA, no longer very young, are far from ‘angels,’ ” Trump tweeted. “Some are very tough, hardened criminals. President Obama said he had no legal right to sign order, but would anyway. If Supreme Court remedies with overturn, a deal will be made with Dems for them to stay!” The program bars anyone with a felony conviction from participating.

Marroquin said that attending the rally brought a range of emotions.

On the one hand, it drove home the fact that the administration and its allies are working to eliminate the very program that allows him to participate in public life.

On the other, Marroquin was surrounded by DACA defenders who come from every walk of life and every part of the country.

“Just seeing everyone come together, come show their support, really means a lot,” he said.

Republicans celebrated Wednesday at the White House in recognition of the fact that President Donald Trump has appointed about one in four active U.S. Court of Appeals judges, and he’s put two judges on the U.S. Supreme Court.

The House vote was 232-196 in favor of a resolution directing several House committees to continue ongoing investigations into President Donald Trump over his pushing Ukraine to investigate a political rival, former Vice President Joe Biden.

A new report by the American Farm Bureau Federation shows a 24 percent increase in Chapter 12 bankruptcies nationwide over the previous year. There were 37 farm bankruptcies in Nebraska and 24 in Iowa.

Former Secretary of Defense Chuck Hagel, discussing President Donald Trump’s decision to pull U.S. troops back from northern Syria, said the Kurds — who helped fight against ISIS — were shocked by the move. “We’ve turned our backs on an ally, and that has not been lost with our allies all over the world. So I think it was just shameful," Hagel said.

Vice Admiral Charles Richard, nominated to lead U.S. Strategic Command, testified Thursday before the Senate Armed Services Committee, which is reviewing his nomination. He said that the nation’s “triad” of nuclear weapons delivered by land, air and sea must be “safe, secure, reliable and effective,” but he declined to take a stance on whether the U.S. should withdraw from the Open Skies Treaty.

What are the rules of military activity in space? NU College of Law is helping provide answers

Experts are working to draft a document called the Woomera Manual, an attempt to lay out how the law should be applied to military activities in space. It’s an initiative spearheaded by a group of universities that includes the University of Nebraska College of Law, which has developed a specialty in space law.

After a trip that included stops in Japan and Australia, Rep. Don Bacon, R-Neb., said his discussions with U.S. military commanders along the way drove home the importance of U.S. alliances in the region as a way of countering China's influence.

Sen. Sasse calls it 'crazy' to not have more answers on Jeffrey Epstein's controversial death

"This is a sex trafficking ring in the United States," said Sen. Ben Sasse, R-Neb. "This guy had evidence. He’s got co-conspirators, and there are victims out there who want to know where the evidence has gone.”

The longest-serving female professor at the University of Nebraska-Lincoln has sued the university, alleging she has received unequal pay because of her gender.

Rep. Don Bacon, R-Neb., says it's a sign of dysfunctional government that the two parties have been unable to come together on money for the border wall.

University of Nebraska-Lincoln students, from left, Jorge Marroquin, Frida Aguilera de la Torre and Fatima Barragan-Herrera at a rally outside the U.S. Supreme Court on Tuesday in support of the Deferred Action for Childhood Arrivals program. The English translation of their signs is “I am an American.”

University of Nebraska-Lincoln students, from left, Jorge Marroquin, Frida Aguilera de la Torre and Fatima Barragan-Herrera at a DACA rally outside the United States Supreme Court building on Tuesday. They were there to show support for the Deferred Action for Childhood Arrivals program.