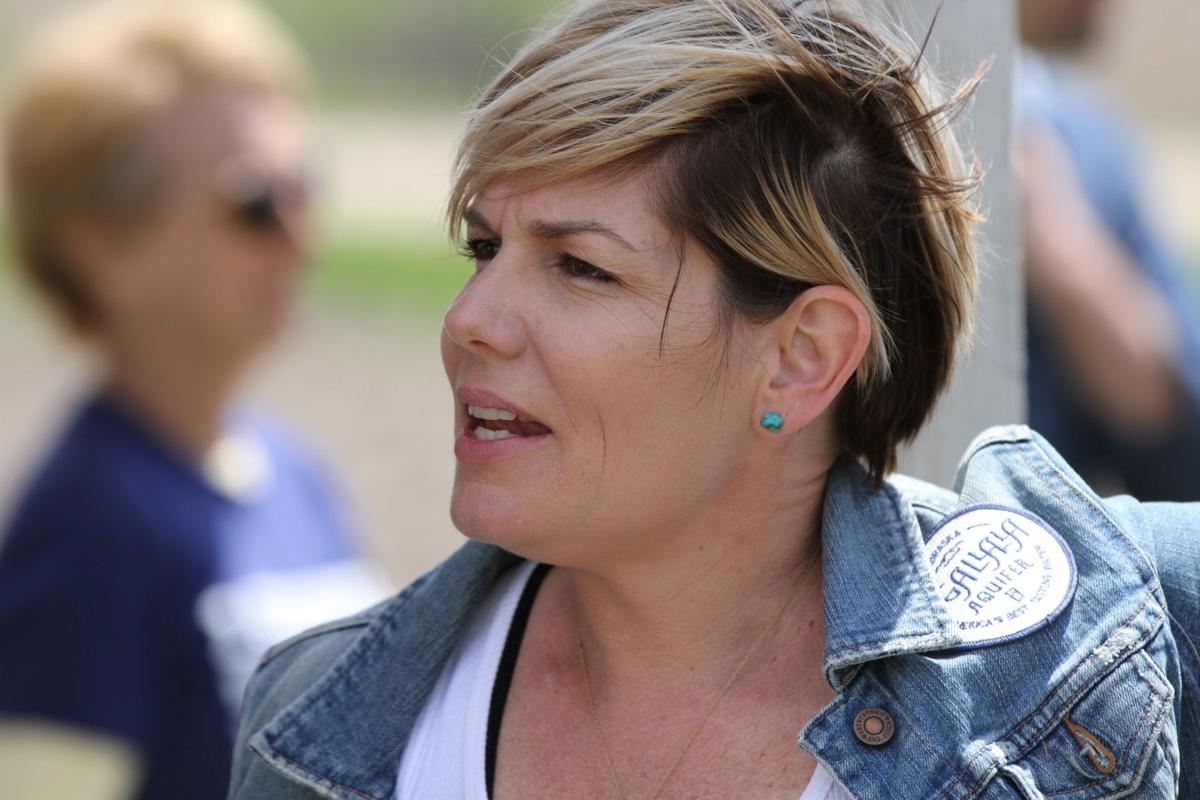 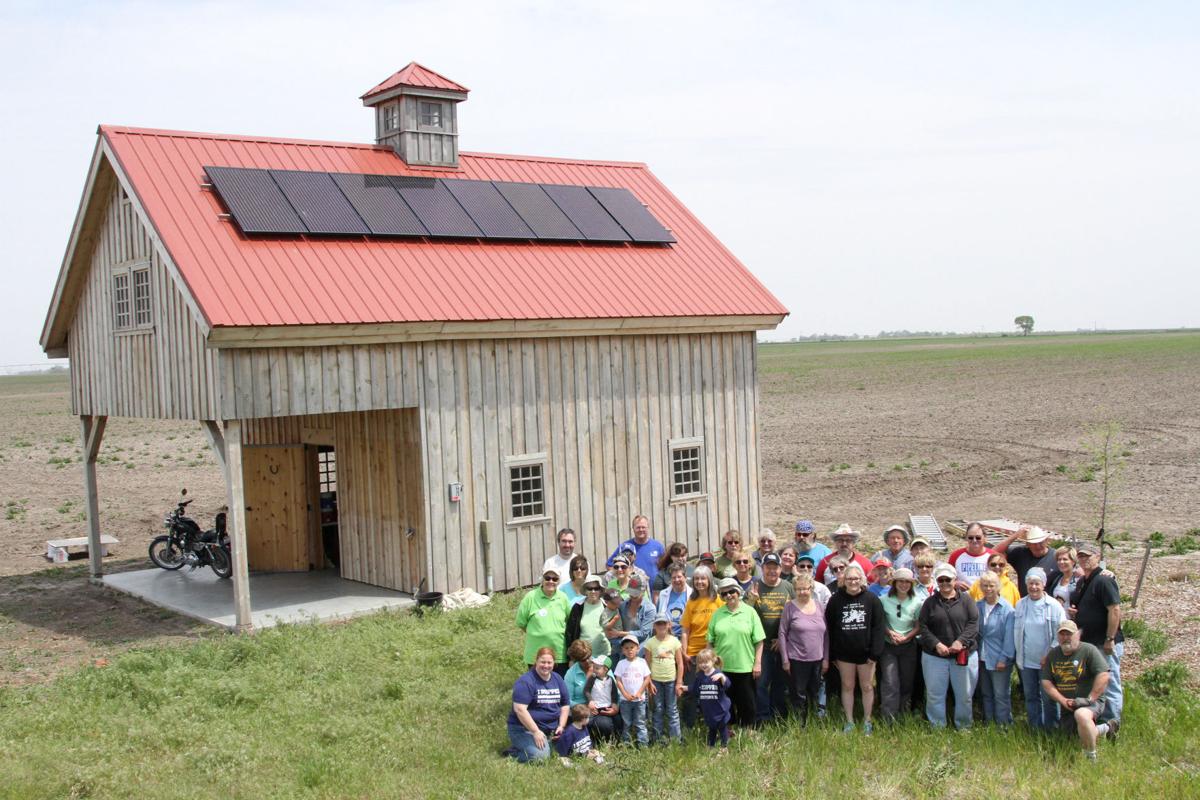 Supporters of Bold Nebraska gather for a photo near the Build Our Energy Barn, erected by the organization in 2013 as a symbol of the fight against the Keystone XL pipeline. 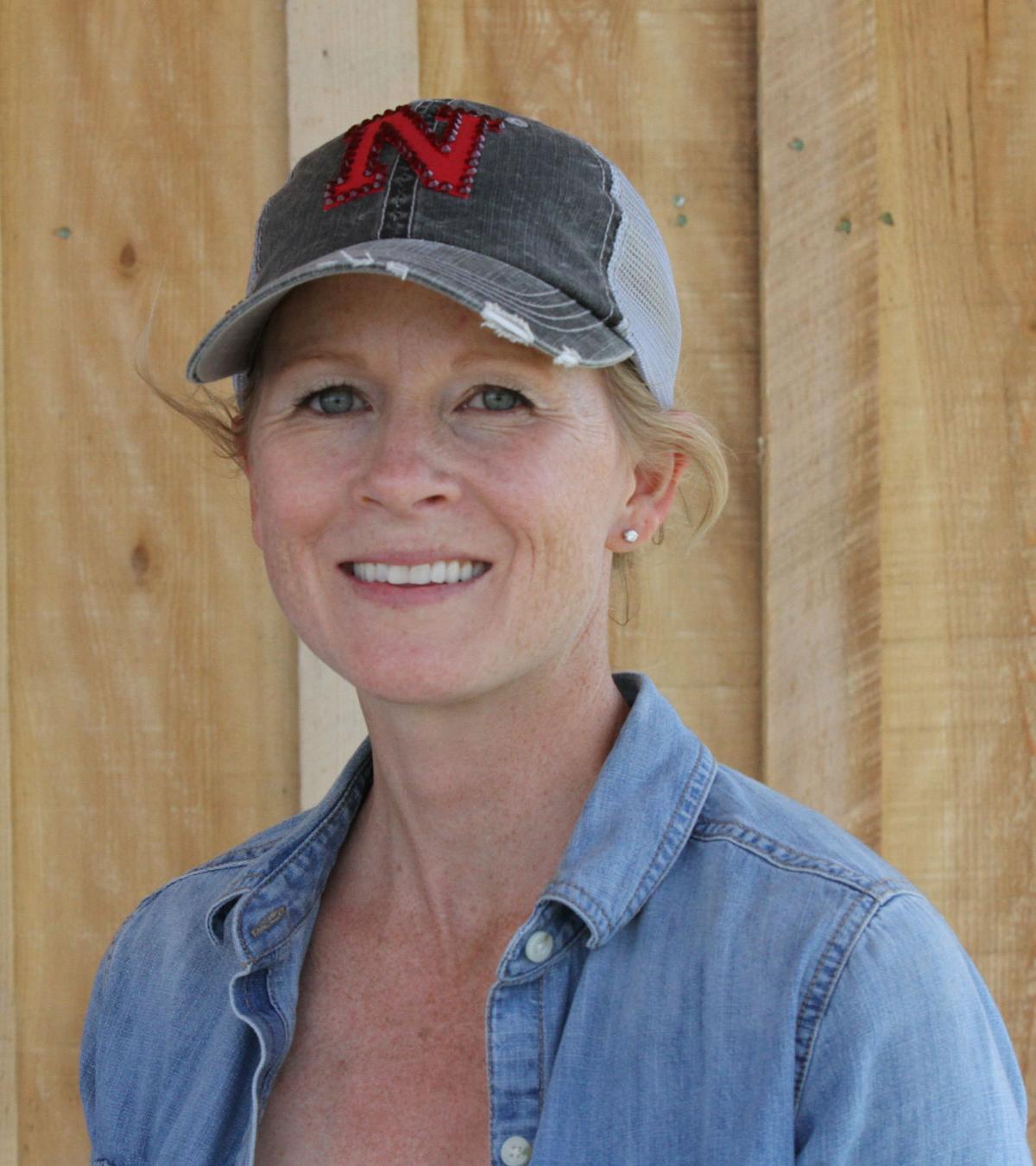 YORK, Neb. — They call themselves “vintage” activists for the environment.

And when members of 100 Grannies for a Livable Future needed advice on how to fight a proposed oil pipeline in their home state of Iowa, they contacted Bold Nebraska.

“We knew we could turn to you to help us fight the pipeline because you guys are the experts,” said Miriam Kashia of North Liberty, Iowa, speaking at an event Saturday hosted by the Nebraska group.

The Keystone XL oil pipeline, once proposed to run through Nebraska and other states, gave rise to the progressive activist organization and its leader, Jane Kleeb. Now that the pipeline is defeated, some of her opponents probably hoped she would move onto another national issue — preferably on one of the coasts.

While Kleeb has no plans to leave Nebraska, her organization is on the move.

She will manage an umbrella group that has launched chapters in Iowa, Oklahoma and Louisiana. While Kleeb will transition out of day-to-day operations of Bold Nebraska, she plans to remain in Hastings, where she lives with her husband, Scott, and three daughters.

She wants to focus on fighting big fossil fuel projects and trying to pass legislation to outlaw eminent domain for private development. And while she would still like to run for elected office, she’s putting that in the “someday” category.

In the meantime, the group she founded will continue its work in the state. In recent months Bold Nebraska has criticized a law passed by Nebraska lawmakers to allow packers to own hogs. And it has helped organize opponents of a proposed chicken processing plant near Fremont.

“We want to stop risky fossil fuel projects and stop corporate ag,” she said. “Stand up to big corporations bullying families. People on the outside are looking at us as more of a populist organization — that’s probably right.”

A Florida native who once headed the Young Democrats of America, she first came to Nebraska to help organize the 3rd Congressional House race of Democrat Scott Kleeb. The two married after his 2006 run, which, though he lost, was still the best showing by a Democrat in the district in decades.

Jane Kleeb then emerged as the director of Change That Works Nebraska, an effort to pressure then-Sen. Ben Nelson of Nebraska to vote for health care reform. As the campaign wound down, she approached Omaha philanthropist Dick Holland about funding a progressive activist group.

Kleeb envisioned an organization that would elbow its way into conversations about the state’s policies. Holland was sold, both by the pitch and the plucky 5-foot-5 woman with the sharp elbows.

“She has no reluctance to step into the battle,” he said.

A couple of months later the course of the fledgling organization would change when Kleeb attended a U.S. State Department hearing in York about a proposed Canadian oil pipeline. Kleeb was impressed by the passion and intelligence she heard from farmers and ranchers who testified against the Keystone XL project.

She recognized that protecting private land and clean water were issues that could appeal to politically independent and conservative landowners in ways that more traditional environmental causes could not. In rural Nebraskans, Kleeb saw a population whose livelihoods depend on the environment, but who were largely ignored by national groups.

And like a rancher with hot irons, she stamped Bold Nebraska’s brand on apparel, yard signs, social media and the stage of a Neil Young-Willie Nelson protest concert that attracted 8,000 people to a northeast Nebraska farm on the pipeline route.

She called the events grass-roots “actions”; they became a hallmark of her approach. Some critics considered them self-promotional gimmicks.

Some of her foes in the Keystone XL battle conceded they grudgingly respected her ability to focus the opposition. She succeeded in “stoking people’s emotions” to fuel a left-of-center fight against fossil fuel and those who make their livings from it, said Chris Peterson of Lincoln, a conservative campaign and public relations consultant who worked for a pro-pipeline group.

“Her success has been at the detriment of jobs and economic development,” Peterson said. “I think that while she’s certainly become a notable figure, especially within the green movement, it’s definitely come at a cost.”

In response, Kleeb said renewable energy projects such as wind and solar create jobs, including in Nebraska.

Bold Nebraska is categorized as a 501(c)4 social welfare organization, which makes it exempt from federal income tax. Donations to such groups are not tax deductible, so the groups do not have to disclose their donors.

Nonetheless, Kleeb supplied a listing of Bold Nebraska’s major donors, which has expanded since Holland supplied the seed money. Among the supporters are the New Venture Fund in Washington, D.C.; the Cloud Mountain Foundation in New York; and David desJardins, one of the first software engineers at Google, who supports progressive political causes.

The organization also has collected smaller contributions from roughly 10,000 individual donors. Kleeb estimated that three out of four are from Nebraska.

Now she is going to see if she can duplicate her success in other states. The umbrella organization is Bold Alliance, and Kleeb will be its president.

“I knew if we just stayed in Nebraska our fundraising abilities would be limited to a small population of donors,” she said. “So what if we brought that model to other states fighting not only pipelines but other risky fossil fuel projects?”

In Louisiana, that means opposing offshore drilling and helping low-income communities faced with challenges related to climate change. In Oklahoma, it is raising awareness of earthquakes linked to fracking injection wells and building partnerships with Native American activists.

In Iowa, the group opposes the Bakken pipeline and is pushing the state’s attorney general to join an effort to punish Exxon for ignoring internal scientific evidence on global warming.

Key funding for the expansion came from the Public Trust Network, a conglomeration of social change organizations focused largely on environmental issues. Depending on how the partnership unfolds, it could result in up to $2 million over five years.

Zach Pollet, national campaign director for the network, said his organization was impressed with what Kleeb was able to do during the long battle over Keystone XL.

“Bold Nebraska engaged farmers, ranchers and tribes,” Pollet said. “To us it seems like the right thing to do. But it also seems like a smart thing to do because it looks like a much better way to win.”

Holland, who decided to give Kleeb a chance to start her own organization years ago, said he’s pleased with the direction she’s taking it.

“I hope it makes a hell of a lot of people mad, and I hope they start thinking about the future,” he said.

“I’m happiest when I’m in a room full of farmers and ranchers,” she said. “I like the way they think, the way they act. They’re incredibly reliable.”

Nebraska health care leaders looked ahead to a time when COVID patients and others needing medical care might overwhelm the state's health care system.

Groene said the “hate email” started when an email to colleagues was made public, along with “false accusations that I was irresponsible,” which he blamed on a senator “who is antagonistic toward me.”

7 of Nebraska's 10 largest cities now mandate masks. Find out where.

With the flurry of new mandates, more than half of Nebraska's 1.95 million people now live in a community that requires a mask to be worn indoors.

CHI Health offering $17 per hour to temporary workers amid pandemic

CHI Health is hiring temporary workers to do a variety of tasks to free up hospital staff so that they can focus on more acute issues.

As fundraising continues, the NU Board of Regents may make changes to the $155 million Nebraska football complex and delay the project at least a year.

"We've been here for a thousand years now and, unlike other people who can buy and sell land and move away, we can never move away. This is our land forever. And we'll be here for another 1,000 years."

According to employees, he damaged 25 bottles of wine, a metal detector, a computer, and several other items throughout the store.

There are plenty of interesting tidbits and backstories about historical markers in Jeff Barnes' 176-page book, "Cut in Stone, Cast in Bronze."

Restaurants and bars that sell food can operate their dining rooms until 8:45 p.m. but must switch to takeout service after 9 p.m.

Supporters of Bold Nebraska gather for a photo near the Build Our Energy Barn, erected by the organization in 2013 as a symbol of the fight against the Keystone XL pipeline.