That was the value of the lottery prize the former Iowa governor and U.S. agriculture secretary claimed Monday after matching five of six numbers in the Jan. 22 Powerball drawing.

Vilsack bought a ticket last month at a Hy-Vee Supermarket in his hometown of Waukee, Iowa, when the jackpot grew to an estimated $347 million.

“Occasionally when the Powerball gets above $250 million, I think, ‘What the heck?’ You know, you can dream, like everybody else,” he told Iowa Lottery officials when he claimed the prize.

But, he said, he promptly forgot about the tickets.

Pretty well, it turned out. The winning numbers were 11, 33, 44, 59, 67, and the Powerball was 8. On one of his easy-pick plays, he matched four of five white numbers, plus the red Powerball number.

At first, Vilsack said, his wife, Christie, couldn’t believe it.

She told him to have their son Jess, who lives next door, double-check the ticket.

Vilsack said he will give some money to his church and some to his children. The rest will go to paying down his mortgage.

The next Powerball drawing is Wednesday. The estimated jackpot is $70 million, or a cash prize of $49.8 million.

Director and CEO of Omaha’s Henry Doorly Zoo and Aquarium Dennis Pate, speaks to the media about newly hatched gentoo penguin chicks before they enter their habitat in the Suzanne and Walter Scott Aquarium at the Henry Doorly Zoo.

Creighton players huddle up prior to a college basketball game against Georgetown at the CHI Health Center.

Charles Relford waits to pick up his brother at 24th and Pratt Streets with his three dogs.

Two-year-old Hannah Bonnot of Denver, Colorado, stands in awe before “Mountain Outlaw” taken at Grand Teton National Park, Wyoming, on display at Tom Mangelsen’s “Life in the Wild” exhibition at the Durham Museum in Omaha, Nebraska.

High School football players from Nebraska and Iowa who have been selected as the Omaha World-Herald's Super Six pose for a portrait at the boxing arena located at Camp Ashland in Ashland, Nebraska.

Craig Bachmann throws a training dummy for his dog, Bedlam, a Chesapeake Bay retriever, to retrieve at Standing Bear Lake in Omaha, Nebraska. Bachmann said he was doing some obedience work with Bedlam as well as some lining drills.

Seventh-grade students from Nathan Hale Middle School are reflected in a The New Negro Escapist Social and Athletic Club a portrait by Rashid Johnson while touring 30 Americans, an exhibition from the Rubell Family Collection at the Joslyn Art Museum.

Water covers a road near Valley, Nebraska, on Friday, March 15.

Joe Zavadil, 14, of Omaha, leaps to a lower level of berm seating during the Class B girls state soccer championship game.

Jim Linafelter of Sergeant Bluff, Iowa, and other Husker fans celebrate a third-down stop for Nebraska’s defense against Northern Illinois.

The Westside Warriors take the field through fog and a banner before a high school football game against Creighton Prep.

Tow truck drivers work on trying to get a semi truck out of a ditch after it turned over on Highway 20 in north central Nebraska during a blizzard.

A bike is revealed in the mud below the 13th Street bridge in the Gene Leahy Mall after the water was pumped out of it during renovation work.

Omaha South’s Ukash Weliyo, right, gets a hug from his mother Halima Mohamed after the Packers defeated Omaha Creighton Prep during the Class A boys state soccer final game at Morrison Stadium.

Louisville’s Nick Bennett writes in the dirt before a game against Mississippi State in the College World Series.

Mississippi State’s Jake Mangum reacts after losing to Louisville in a walk-off during game 10 of the College World Series.

The moon rises over the Bob Kerrey Pedestrian Bridge in the early morning hours.

A cat looks up at Jill Tafoya after she revived it in the back of an ambulance after the cat was rescued from a fire.

An allosaurus appears to be eyeing a tasty, 19-month-old morsel named Austin Haseltine as he is lifted from the shoulders of his grandpa, Greg Fasano, by his mother, Amy Haseltine, with his father, Jim Haseltine looking on.

Horses belonging to Faye Etherington of Fremont that were being boarded in Inglewood, Nebraska, are brought into Fremont through floodwater on Highway 77.

Millard West's Corbin Hawkins waits out a rain delay in the dugout.

Looking back at the floodwater below the Broad Street viaduct are from left, Calvin Schmidt, 6, Paul Schmidt, their dad and Avery Schmidt, 7, in Fremont, Nebraska.

Auburn’s Rankin Woley slid into the fence while catching a foul ball for an out during a College World Series game.

An angel statuary sits in a flooded yard in the Hanson Lakes area in Bellevue.

A farmer drives his combine to unload soybeans for transport near Ceresco, Nebraska.

Xiang Fang, right, and his son Ethan, 10, walk along the shoreline at Chalco Hills Recreation Area in Omaha, Nebraska.

Businesses on the southwest side of Hamburg, Iowa, were flooded from the waters of the Missouri River.

Kayla Thege, left, and Mark Batt hang out with their dog, Maia, during a Storm Chasers baseball game.

South Omaha man 'was freaking out' after his Pick 5 lottery numbers won him $226,000

An Omaha woman who won a $50,000 prize in the Iowa Lottery's Triple Play game on Thanksgiving said winning left her too excited to eat. And a winning $226,000 ticket sold in South Omaha still hasn't been claimed.

Richard Beran of Lexington is eyeing a Mustang after winning an $82,000 Pick 5 jackpot prize. His wife is thinking Jeep.

Julie Rondeau of Lincoln says she and her husband will use their winnings — $218,000 — to pay off some bills.

Daniel Moore has a million reasons to be thankful, and he’s not shy about saying so.

He received an initial $25,000 of the prize in a check Thursday. He will have the choice to receive a lump sum for the balance or have the money paid out over time, officials said.

“I was excited,” Parker told Nebraska Lottery officials when he claimed his prize Tuesday. “But I think I was more surprised when I won $450" a month ago.

Also this week, there was a winning $40,000 Mega Millions ticket sold in Kearney. That prize has not yet been claimed.

Another winner from last week: A Nebraska Pick 5 ticket worth $110,000 was sold in Lexington.

Pamela Beauchamp carried around the scratch-off lottery ticket for quite a while before she realized she had a $200,000 winner.

Somebody in Nebraska is getting a $138,000 Christmas present, and it's not coming from St. Nick. 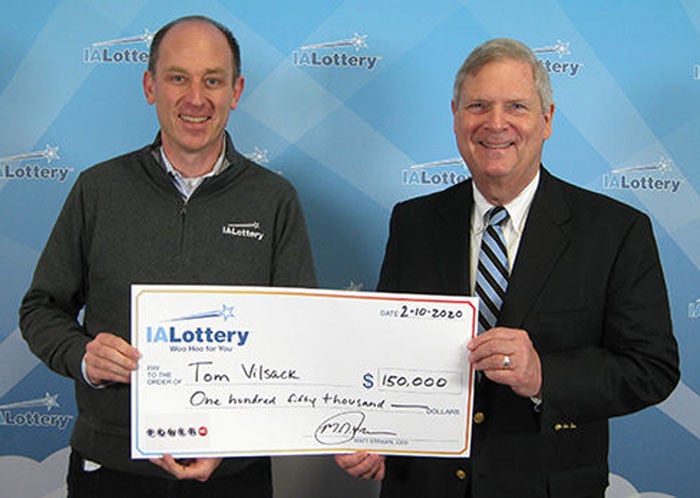 Former Iowa Gov. Tom Vilsack, right, with Matt Strawn of the Iowa Lottery. Vilsack said he’ll give some money to his church and some to his children. 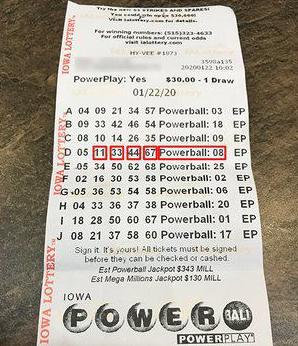 The winning ticket of the former Iowa governor and U.S. ag secretary.