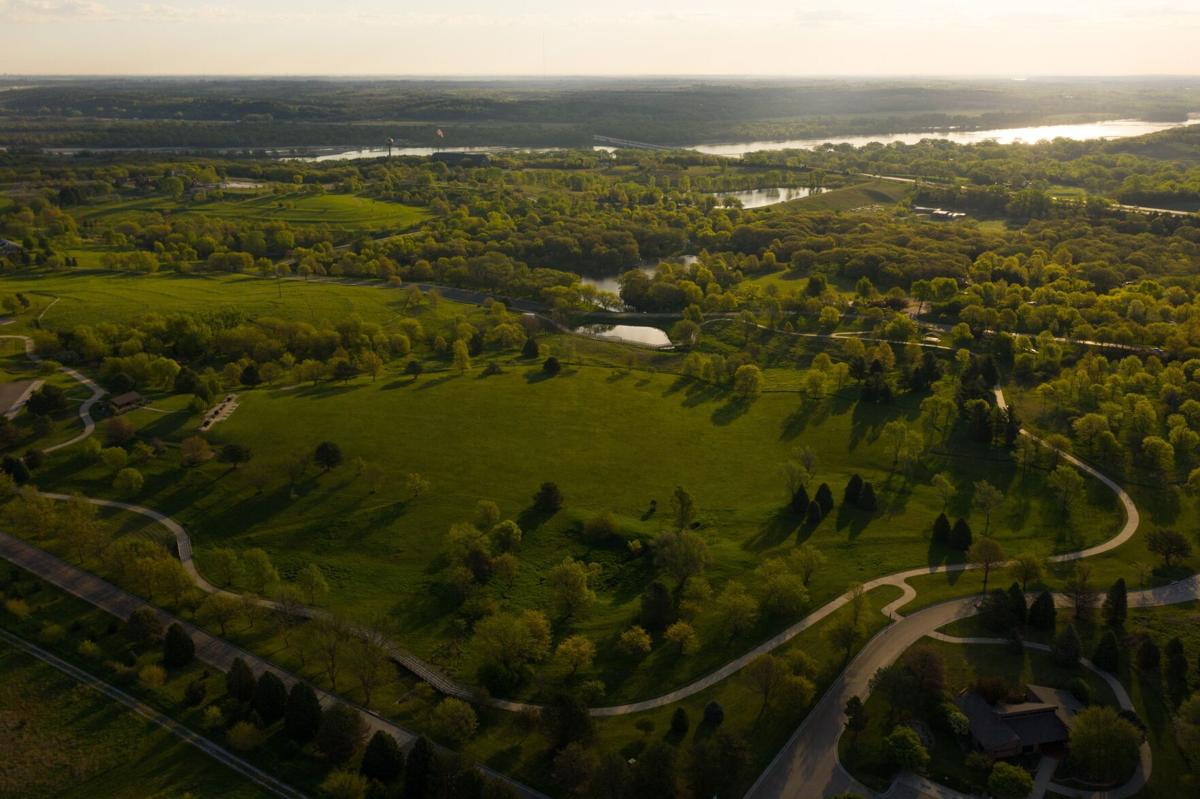 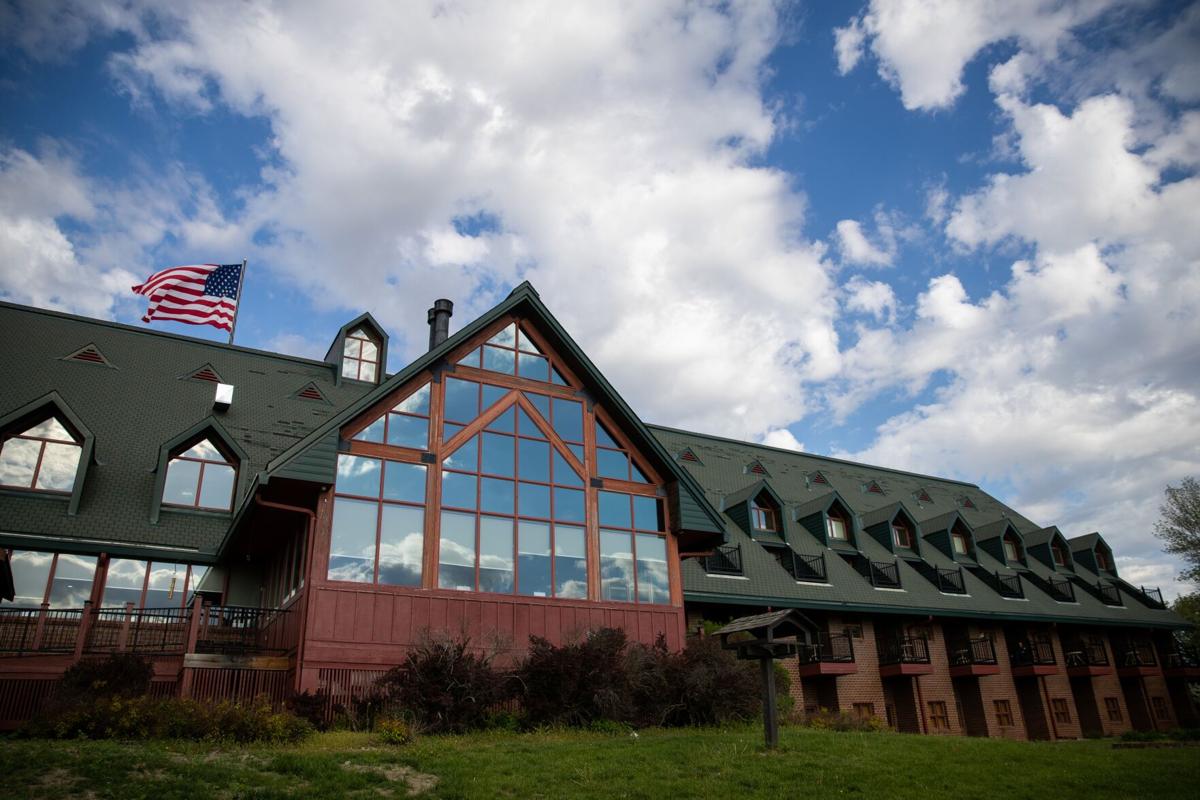 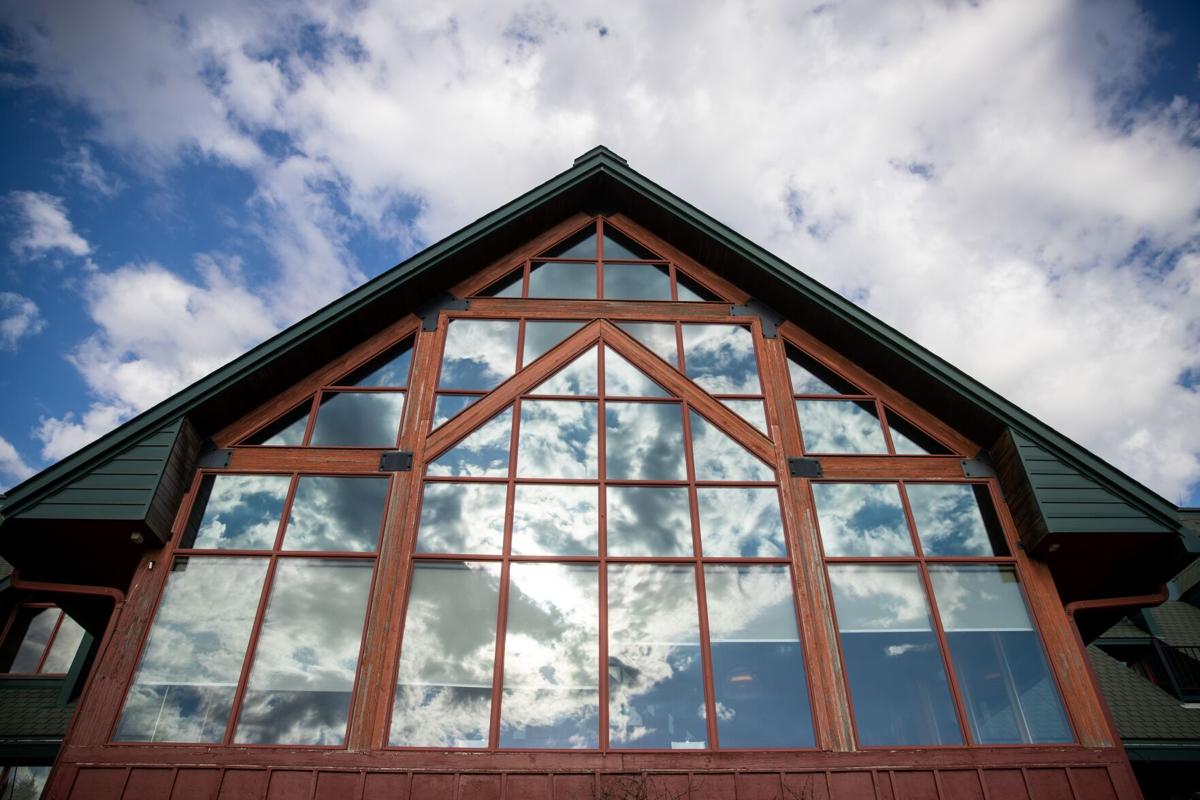 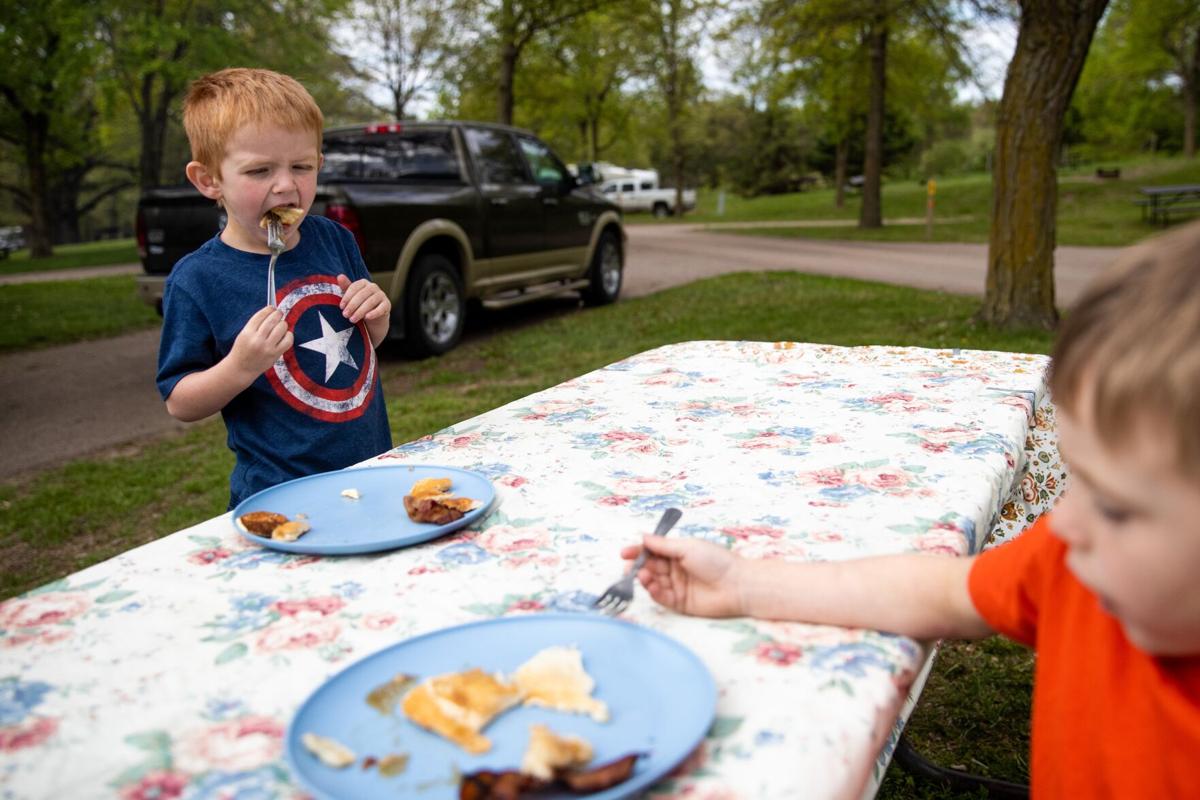 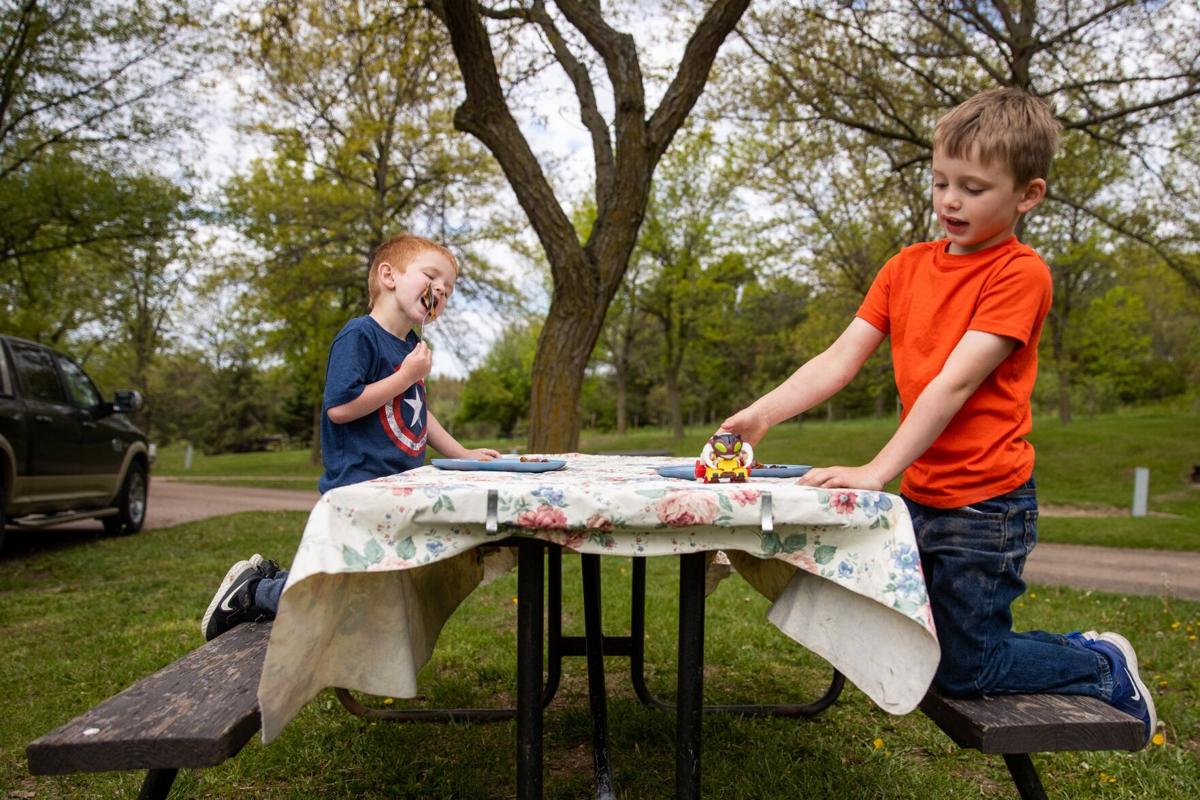 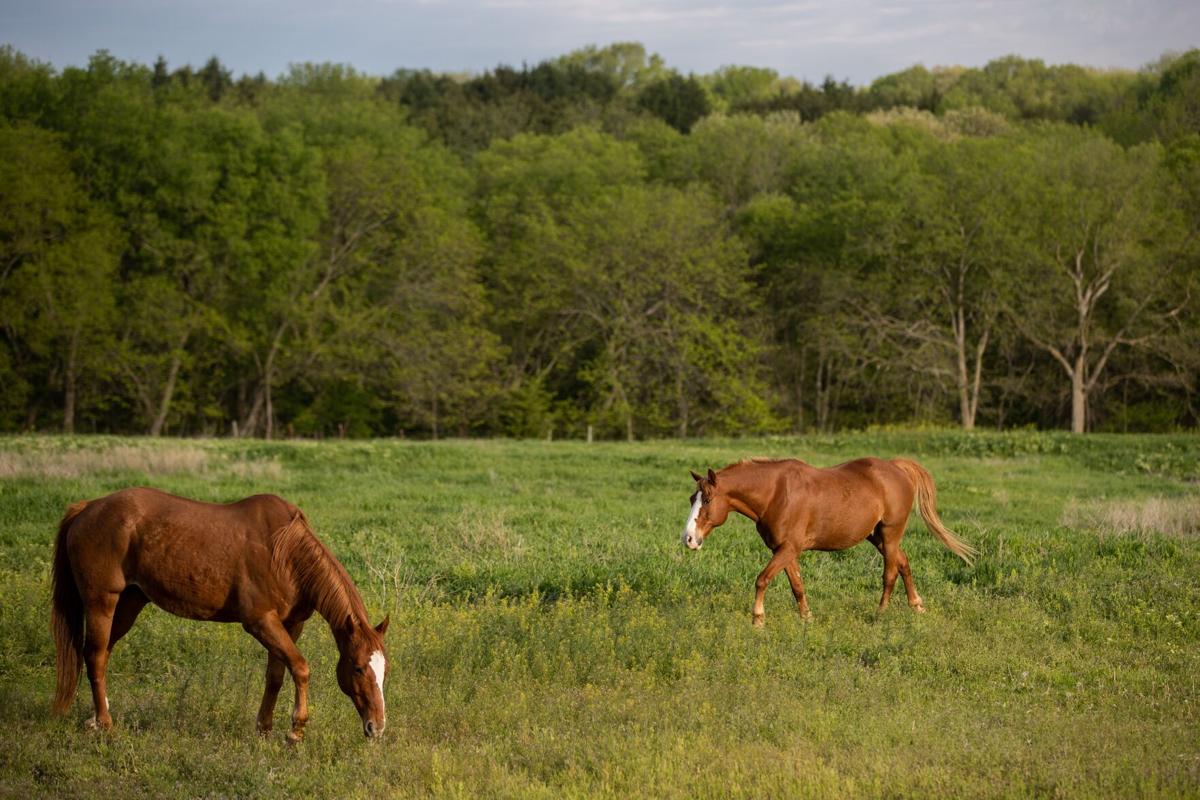 Trail rides are a popular activity at Mahoney State Park in eastern Nebraska. 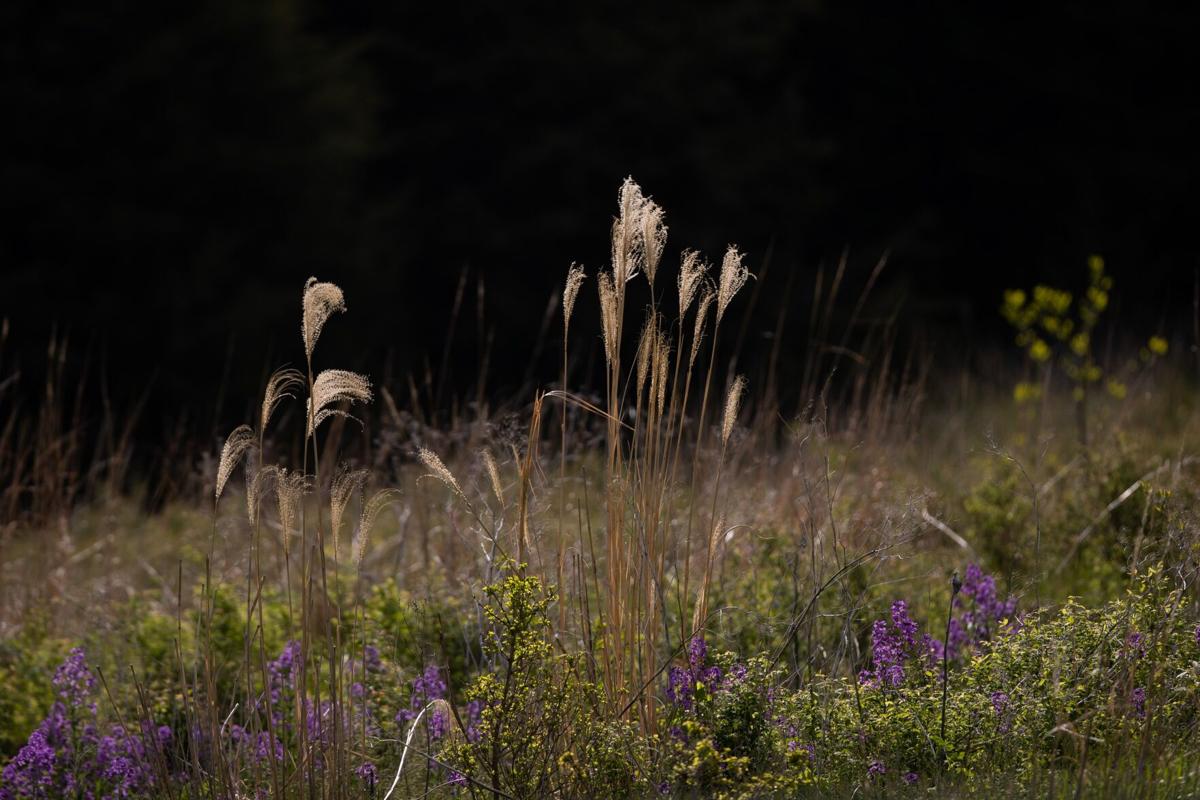 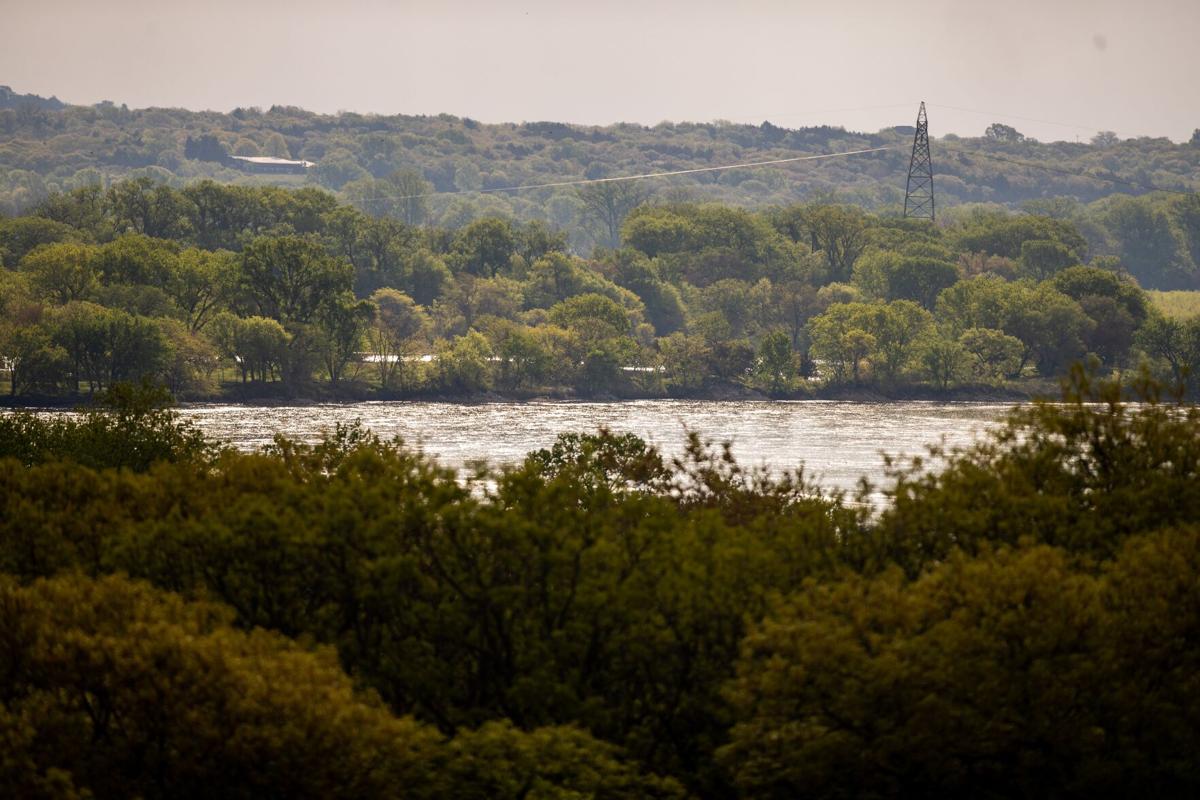 A view of the Platte River from Mahoney State Park. The rolling hills in the interior of the park give way to oak trees along the river. 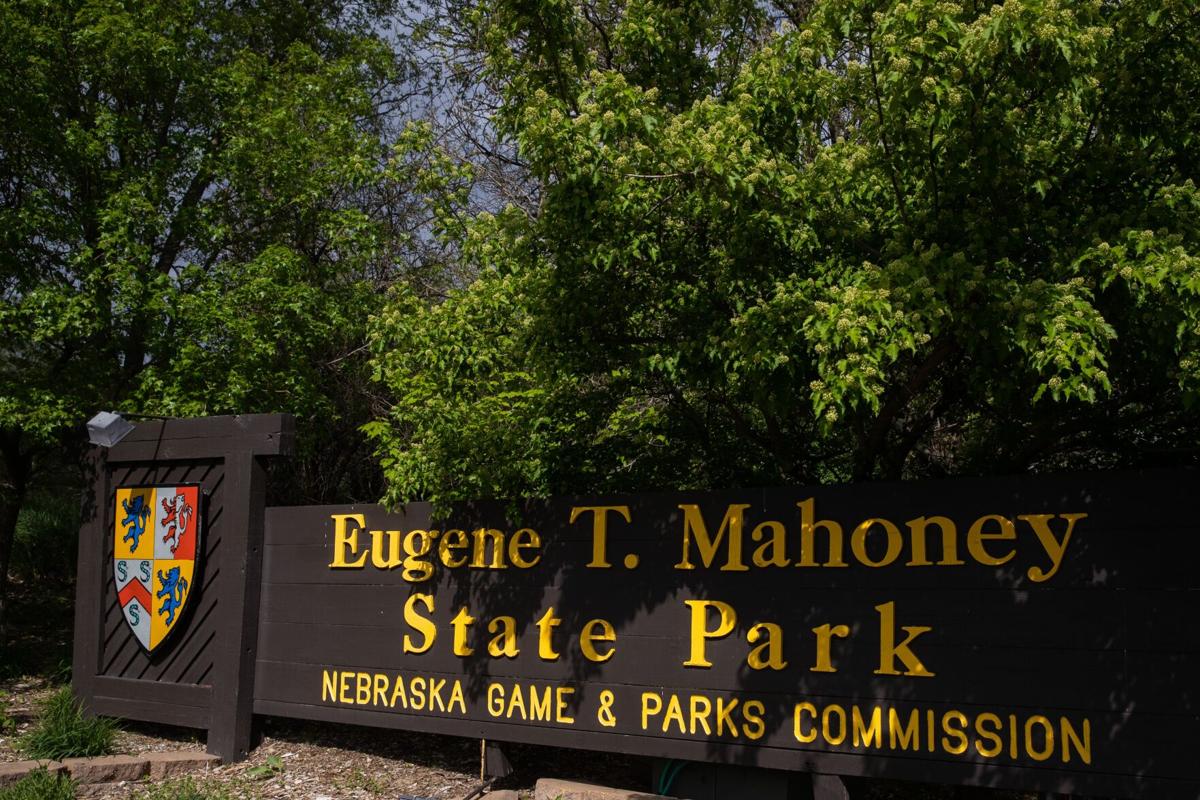 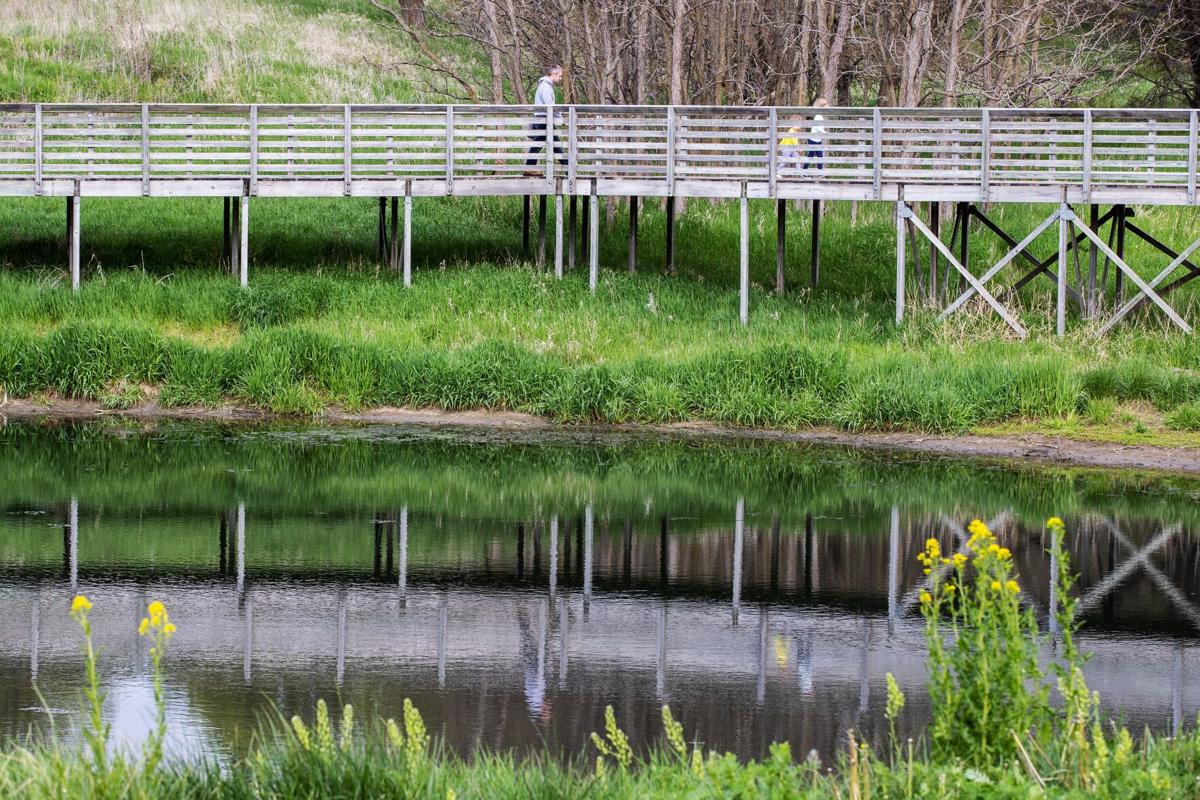 Daniel Van Dam, along with Evelyn, 2, and Lucy, 4, explore Mahoney State Park. There's lots of wildlife to see at the park. 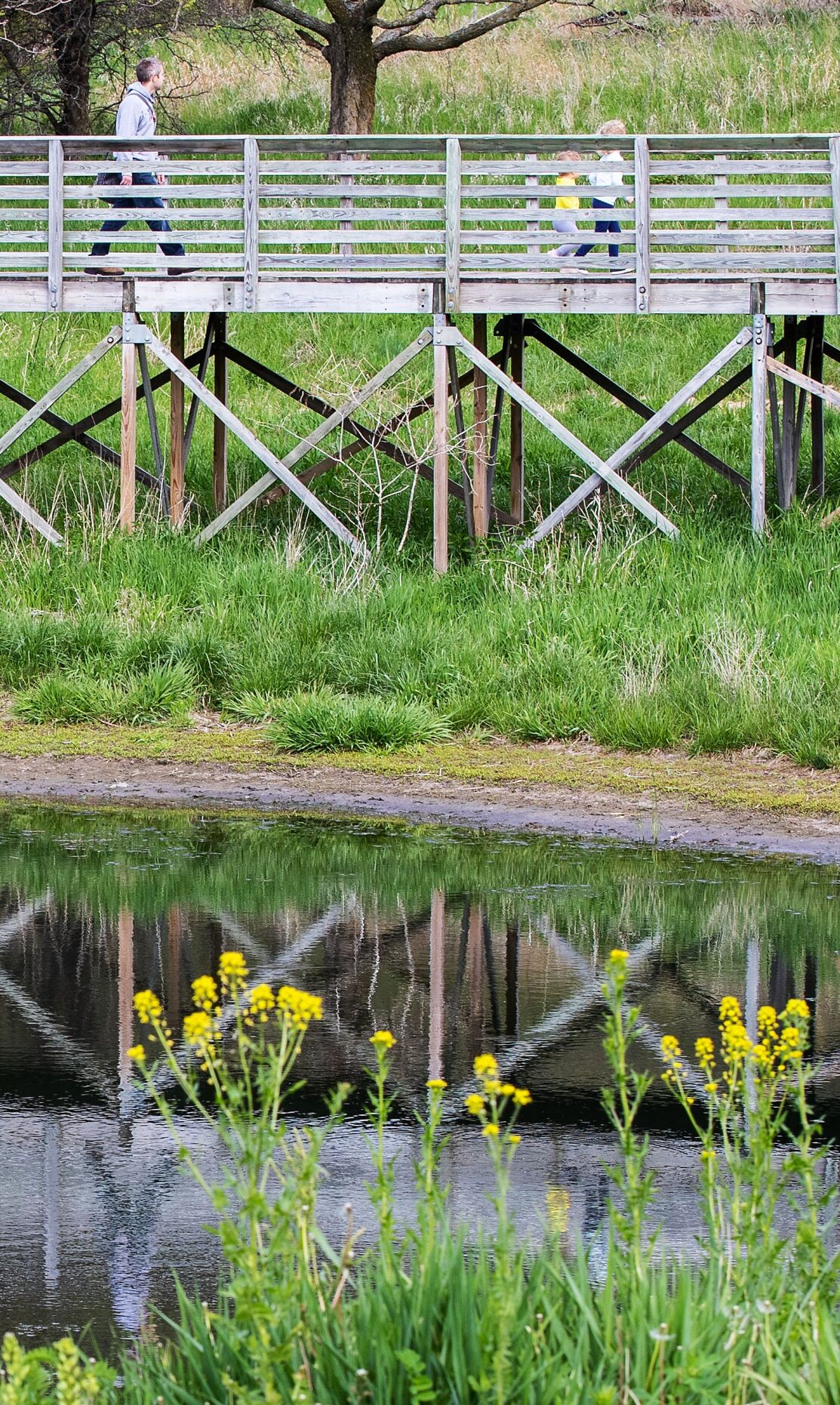 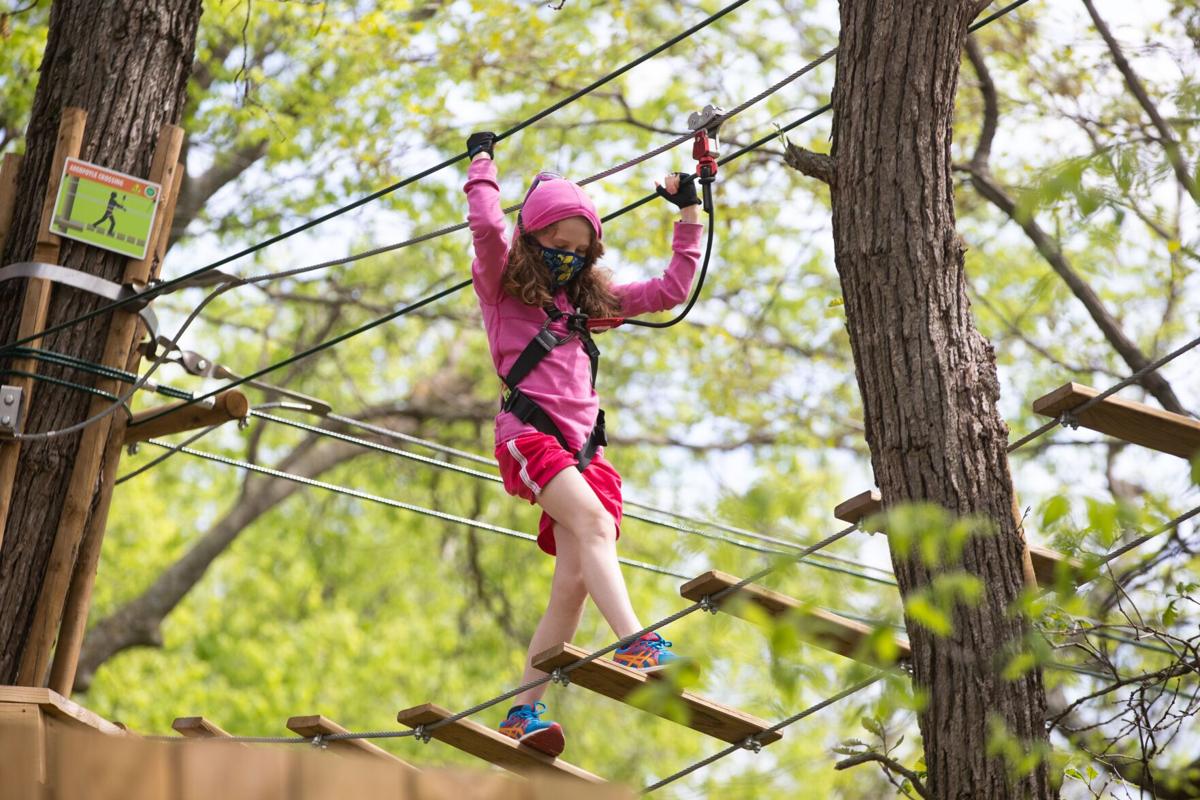 The entry to Mahoney State Park may not scream “Super Fun Center.”

But that’s part of the charm of this park on the banks of the Platte River between Omaha and Lincoln, Nebraska’s two largest cities. The hype builds on itself as visitors discover everything within the park’s 673 acres, regardless of the time of year.

Swimming, horseback riding and fishing are reliable standbys. The treetops adventure course combines rope bridges, suspended obstacles and zip lines to traverse the heights of a forest. And the park offers miniature golf, an indoor climbing wall and a crafts center.

Visitors of all ages can go paddleboating and spy turtles on one of two lakes, then hiss and boo the villain in a melodrama at the park playhouse.

Heck, you’ll soon be able to hold your wedding reception at the remodeled River View Lodge at the sprawling park just off Interstate 80 at Exit 426.

“You would be hard-pressed to get through everything in a day,” Park Superintendent Jake Rodiek said. “You will really get introduced to the outdoors.”

For those not big on all the activities, the park provides ample opportunity to simply get away from it all.

The rolling hills of its interior, where terraces from the land’s farming days are still visible, give way to oak woodlands that overlook the Platte.

Campgrounds and trails sit in remote areas where wildlife abounds.

Jim Swenson, parks division administrator for the Nebraska Game and Parks Commission, enjoys bringing his grandchildren to look for turkey and deer. It’s also a prime destination for birders, with one of the premier bluebird trails in the area. Pollinators waft along areas designated just for them.

“Protecting and preserving those opportunities is very important to us,” Swenson said.

Mahoney, which many consider the flagship of the state’s 76 parks, is celebrating the 30th anniversary of its opening on Memorial Day 1991. It’s named for former Game and Parks director Gene T. Mahoney, who was a big force behind its creation.

Today it averages 1 million visitors a year, rivaling Lake McConaughy at the western end of the state.

Rodiek said Mahoney was the first Nebraska park designed for all-season use.

“We have a lot of activities in the winter. Ice skating, sledding, an indoor playground with concessions, and an indoor climbing gym,” he said. “The cabins are very popular. All the cabins have fireplaces. It’s a unique experience to be out there in the winter.”

Joanie Stone says visitors tell her that just about everything about the park is amazing. She and her late husband, Al, drove the second camper into the park when it opened and helped establish the park’s camp host program.

Letter from the editor: Here's a Midwest travel guide to help plan a post-pandemic epic vacation

“They say, ‘You have such a beautiful park here. You are so lucky to have this,’” she said. “You aren’t just getting that from Nebraska and Iowa people who come and camp a lot. It’s people from California and the West Coast. It’s people who come here for the College World Series,” which is held in Omaha each June.

Stone has seen a lot of changes in the park, most of which have been financed and maintained by private donors. But she says what has remained constant is the emphasis on family fun.

Crafts, swimming pool slides and paddleboats attract youngsters, while the Go Ape Adventure rope course has proven to be a huge draw for teens. Families who don’t want to camp can stay in a modern housekeeping cabin or a guest room at Peter Kiewit Lodge, which has a restaurant that serves breakfast, lunch and dinner seven days a week.

“Memorial Day, Fourth of July and Labor Day, that park is loaded with people just picnicking,” Stone said. “People love to get outdoors and do their thing.”

Those summer holidays sometimes can be a challenge if you’re looking to stay overnight on a last-minute whim. But half of the campgrounds are left open on a first-come, first-served basis. Mahoney is also looking to expand its RV areas as that mode of travel grows in popularity.

If Mahoney happens to be full on a prime weekend, other options exist within a short drive.

Swenson would like to see Mahoney and the nearby Platte River State Park connected by a bike and walking trail, so guests can easily travel between the two.

With all those amenities, the park takes an army to run. The full-time staff of 35 swells with close to 200 temporary workers during the busiest seasons. In the winter they may be required to make snow to keep the sledding runs open or work in the greenhouse where all the park’s flowers are grown.

Swenson and Rodiek laugh that the workforce forms something like a small village — one that always has the welcome sign on.

“It’s cool to see people just stopping as they are traveling through,” said Rodiek, who had just spoken with two women who stopped during their drive from the East Coast to Oregon. “The best part of the job is to be stewards of the land we’re entrusted to oversee. The memories being made. The smiles on the faces the first time they catch a fish, go riding or see a bird they’ve never seen before.”

Need to get away?

Bring your appetite: Taste of Omaha will have more than 40 vendors

Everything from funnel cakes to tacos to Cajun favorites will be available in one place this weekend at the 24th annual Taste of Omaha in Elmwood Park.

The city does not know how long Zorinsky Pool will remain closed.

A labor of love: Bringing Friend's 1886 Opera House back to life

Longtime efforts to renovate a second-story Opera House in Friend, retaining a piece of history and creating a new community gathering place, have gained momentum.

River otter trapping and mountain lion hunting seasons both were approved Friday at the Nebraska Game and Parks Commission meeting in Chadron.

“Being recognized by the association and my colleagues across the country is humbling. This is a tremendous honor, and I am grateful for the recognition.”

Trail rides are a popular activity at Mahoney State Park in eastern Nebraska.

A view of the Platte River from Mahoney State Park. The rolling hills in the interior of the park give way to oak trees along the river.

Daniel Van Dam, along with Evelyn, 2, and Lucy, 4, explore Mahoney State Park. There's lots of wildlife to see at the park.