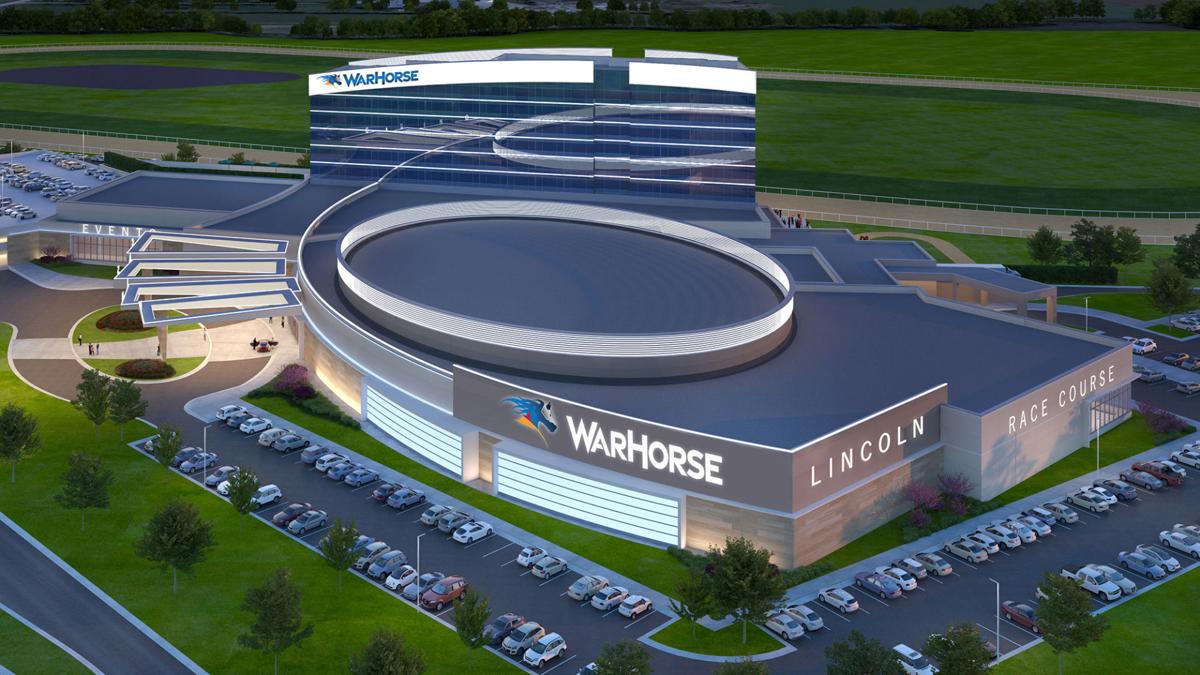 WarHorse Gaming expects its new $200 million hotel and casino at Lincoln Race Course to be a boon for horse racing and the local economy as the city comes out of the coronavirus pandemic.

WarHorse Gaming added its new logo to renderings of the casino complex planned for Lincoln Race Course. This view is looking east.

For now, happy hour draws and chicken wing specials, and the chance to throw down a few bucks on thoroughbreds running in other states, mark attractions at Lincoln Race Course.

But the idle construction rigs in the parking lot and the rails marking the new larger track signify a much different future.

For entertainment-seekers, Lance Morgan and Lynne McNally believe the sales pitch of “Lincoln’s Best Bet” on the digital sign outside is about to deliver a significant payout.

Plans are underway to transform the meager simulcast building, with its bar and restaurant, into a $200 million hotel, casino and event space.

WarHorse would feature a 196-room hotel overlooking the racetrack, as many as 1,200 gambling stations, a spa, restaurant, bars and conference and event space.

Once a site envisioned as a shopping hub, the grounds off U.S. 77 and West Denton Road carry the potential to catalyze tourism in the city and shape further growth on Lincoln’s western edge.

Preparations made during the mid-2000s to ready the land for a Walmart Supercenter and other retail primed the area for a future that involves attracting thousands of people daily, said Lincoln-Lancaster County Planning Director David Cary.

The recession jettisoned plans to put in the big-box behemoth and build out Southwood Village. But two decades later, potential remains for the area adjacent to the West Bypass

After the State Fair’s move to Grand Island and plans for Nebraska Innovation Campus took off on the former fairgrounds, Lincoln Race Course opened at 7055 S. First St. in 2013. A track with a single straightaway was completed two years later.

WarHorse’s proposed multistory casino and hotel complex would dominate the swath of land, taking up 165,000 square feet and featuring a three-story, 900-stall parking garage, according to documents filed with the Planning Commission. Construction of the WarHorse casino resort would occur in phases, likely beginning next year, project officials have said.

Nebraska has not yet implemented the necessary rules for casino gambling at licensed horse tracks, approved by voters in November.

Lincoln Convention and Visitors Bureau Executive Director Jeff Maul has not crunched numbers yet, but the tourism created by WarHorse could give Lincoln a well-timed boost.

“As we come out of a pandemic, this could be seen as an economic engine to grow our tourism economy,” Maul said.

Before the demise of State Fair Park, the city regularly hosted thoroughbred racing meets dating to the 1940s.

“We’re definitely going to be getting back to that,” McNally said.

Once the casino and hotel are finished, WarHorse could bring as many as 925 jobs to the city while generating as much as $15 million in state and local tax revenue annually, according to project officials.

WarHorse Gaming is a subsidiary to Ho-Chunk, the economic development arm of the Winnebago Tribe.

The Rev. Michael F. Gutgsell, former chancellor of the Archdiocese of Omaha, is accused of stealing $179,000 from another priest and $96,000 from a parish in Springfield.

Jamin Creek, 18, was killed in a car crash when he and four other teens collided with another vehicle in the intersection of 204th Street and West Q Road about 3:45 a.m. Friday.

McKewon: Scott Frost is sick of losing. So are the Huskers. Yet it happened again

Scott Frost didn't hide his frustrations. His players didn't either. But that doesn't seem to change the result as Nebraska has now lost 15 one-score games under Frost. Sam McKewon has more from Michigan State.

Special teams, along with a bunch of other things, are costing Nebraska wins, fans and general faith. Scott Frost may well survive it, but unless NU turns a corner, major staffing changes are likely.

Omaha woman charged after 45 dead animals found in her home

In an affidavit, investigators described a garage with solid rabbit waste several inches high and a basement with abundant dog feces and mold.

Can Nebraska ever stop committing the cardinal sin? The players believe so, or at least they say they do. The fans are harder to convince.

It was almost a night to remember for Husker football. Instead it will be a game nobody can forget, says Tom Shatel. How much can a program and fan base endure?

Michigan State had a bit of a trick on the punt return touchdown that tied the game late. And that particular play was drawn up by a former Nebraska assistant coach.

WarHorse Gaming expects its new $200 million hotel and casino at Lincoln Race Course to be a boon for horse racing and the local economy as the city comes out of the coronavirus pandemic.

WarHorse Gaming added its new logo to renderings of the casino complex planned for Lincoln Race Course. This view is looking east.