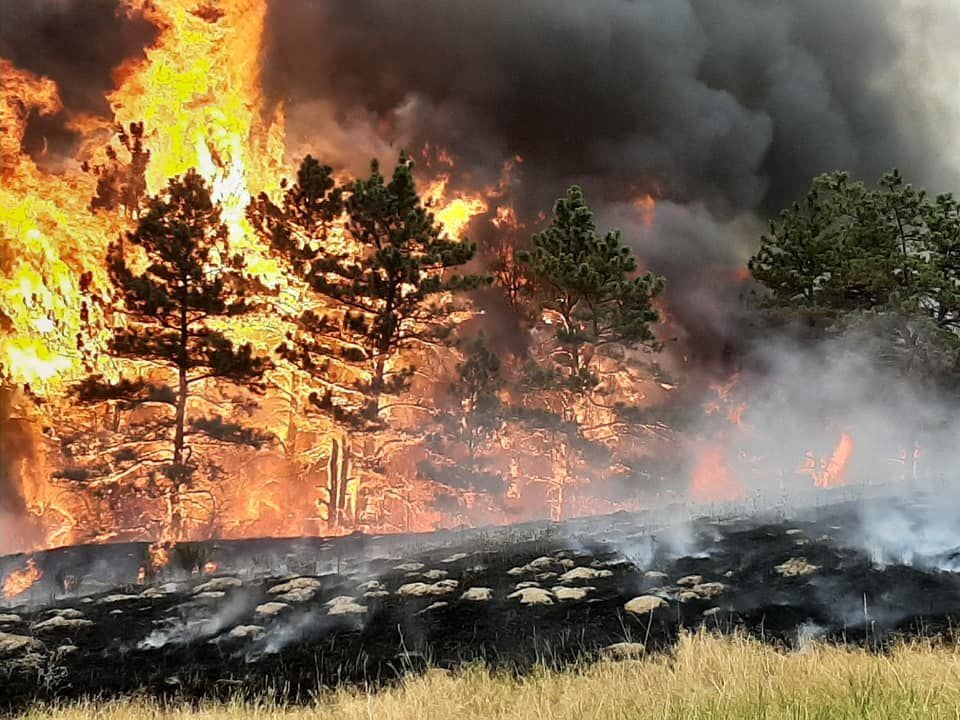 The Hubbard Gap Fire in the Wildcat Hills south of Scottsbluff injured six firefighters and burned 4,000 acres in late August. The state’s dedicated firefighting plane plus six others were used in firefighting in 2020, compared with two or three in a normal year. But what’s normal is changing. 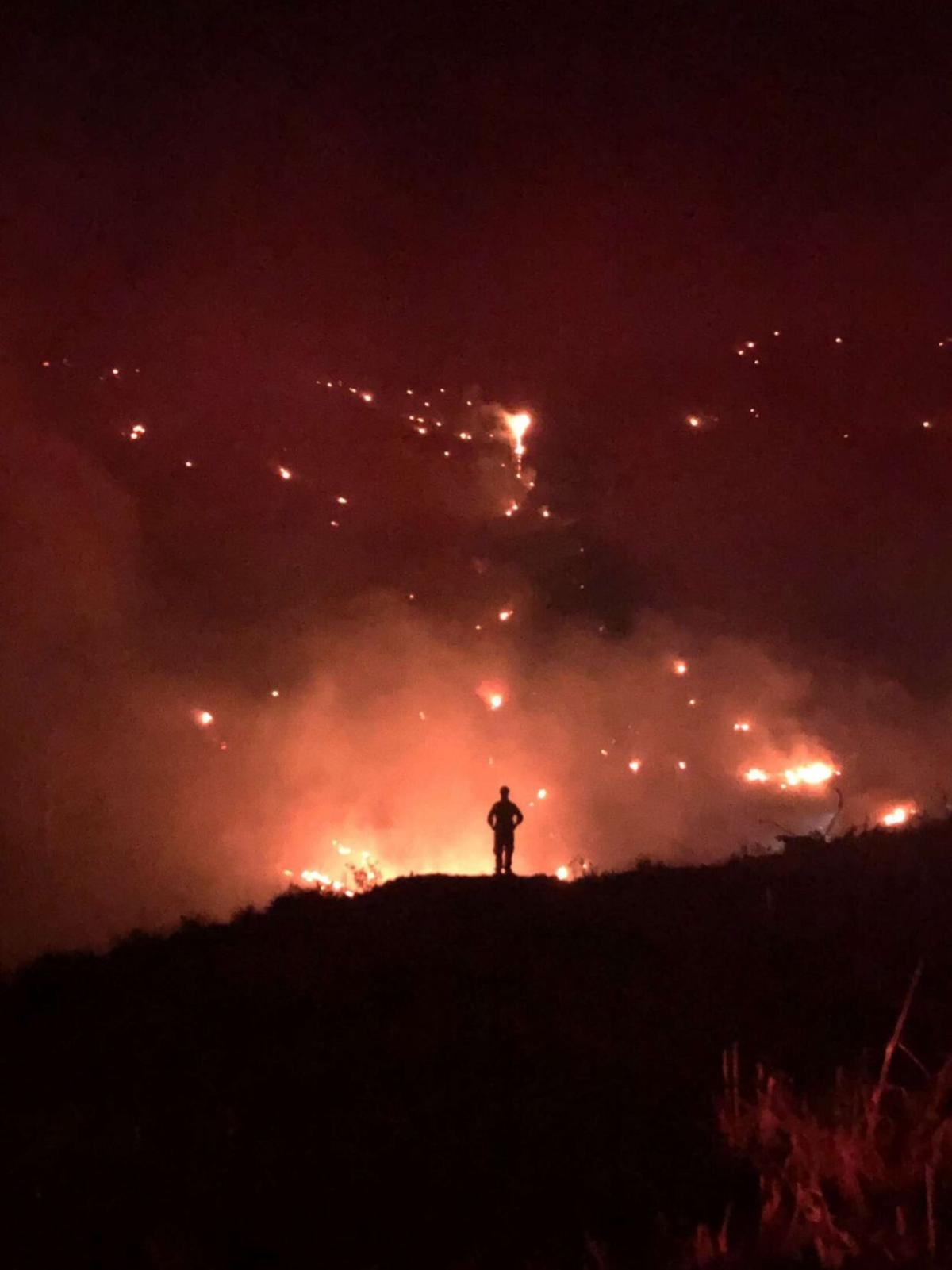 A firefighter from a federal agency watches heavy fuels burn through the night inside the fire lines of the Aristocrat Fire near Chadron on Aug. 28. 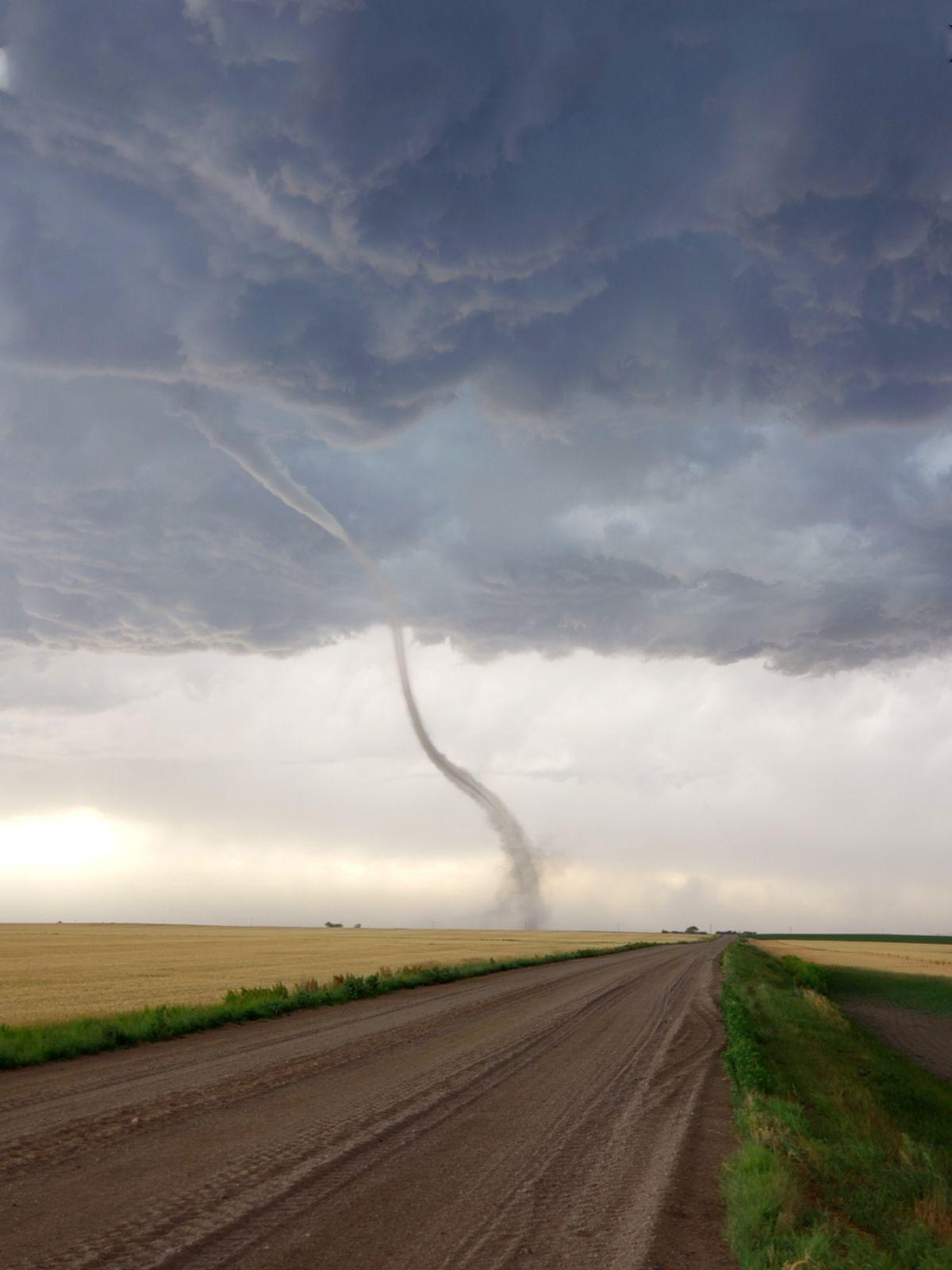 A landspout near Grant, Nebraska. Over the summer, a cluster of landspouts made for riveting photography. 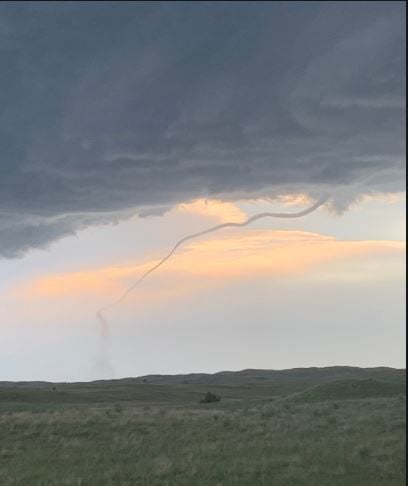 More than a dozen reports of landspouts were reported in Nebraska and northeastern Colorado on July 8, 2020. No damage was reported. This photo was taken near Thedford, Nebraska, shortly after 8 p.m.

The sharp swing from one of Nebraska’s wettest years on record to widespread drought dominated the weather headlines in 2020.

Through November, Nebraska was in the midst of its 15th driest year out of 126, while 2019 was the state’s third wettest. Most noticeable was August 2020, the state’s driest August on record.

Weather extremes are normal in Nebraska because the state sits at the crossroads of continental climate patterns, said Martha Shulksi, Nebraska state climatologist. That can make it hard to detect the inflection of climate change, but global warming has supercharged the atmosphere with energy, she said.

“More variations and back-to-back extremes (very wet to dry) are the signature of climate change,” she said.

The following are five noteworthy weather stories of the year.

Drought: At the start of 2020, not an acre of Nebraska was in drought, according to the U.S. Drought Monitor. Now, more than 99% of Nebraska is in drought, with half in severe to extreme drought. The state hasn’t seen a drought this extensive since the flash drought of 2012 lingered into 2013, according to the U.S. Drought Monitor, based at the University of Nebraska-Lincoln. Rangeland declined so much that some ranchers sold cattle early to save on feed. Several counties were designated disasters.

Wildfires: The state’s driest August on record fueled large range fires. By early September, the state had recorded more than 625 wildfires, the most since 2012, the state’s record year. The Hubbard Gap Fire in the Nebraska Panhandle left six volunteer firefighters injured, prompted two emergency evacuations and devoured 4,000 acres. The Aristocrat Fire near Chadron erupted the day after the Hubbard Gap Fire, and the two large fires severely taxed resources.

Hazy skies: Smoke from massive wildfires in western states turned Nebraska’s skies hazy and milky. For the most part, the smoke from the tragic fires remained in the upper atmosphere and did little more than enhance Nebraska sunsets. But there were days when it did filter down and affect air quality. At one point in September, visibility in the North Platte area dropped to about a mile, said Chris Buttler, meteorologist with the National Weather Service.

Landspouts: The year was light on tornadoes, but clusters of landspouts occurred over the summer in Nebraska, lighting up social media and making for riveting photography. Landspouts lack the strength of traditional tornadoes and often appear as thin ropes. In July, the National Weather Service received more than a dozen reports of landspouts in western Nebraska and a handful in Colorado.

Derecho: Eastern Nebraska was dealt a glancing blow by the derecho that devastated Iowa. Derechos are long-lived, straight-line wind storms, and this one traveled 770 miles, causing $7.5 billion in damage, according to the National Oceanic and Atmospheric Administration. In Omaha and surrounding areas, about 57,000 customers of the Omaha Public Power District lost power, making the storm one of the 10 worst in the utility’s history.

Here are five of my better-read stories that are varied and share only one thing in common: They have nothing to do with COVID-19.

Nebraska's ethical hunters have nothing but disdain for poachers. And now I know why: Those who cheat at hunting bait their prey, monitor them…

Back in the day, opening a newspaper was like reading someone's diary. The paper was filled with stories in which the private lives of every d…

Reporting introduces reporters to people we'd otherwise not have a chance to meet. Andrea Grove was one of those interesting people. And each …

Adrienne Bonacci died years ago, but the memory of her never leaves her husband, Buster. That was very apparent when his family shared his mem…

Message in a bottle travels across the years

Every once in a while we have a chance to write stories that are simply charming. For me, this was one such story. Imagine that a bottle could…

Wildfires were reported this summer near Scottsbluff and Chadron. But Nebraskans are now better trained and better equipped to fight wildfires than in 2012, the state's worst fire year.

2019 was region’s wettest on record. All that moisture impacted birds, cattle, even West Nile

The heavy precipitation played out in multiple ways, many that have been well-documented: lost lives, damaged infrastructure, and the loss of livestock and crops. But there were also less publicized effects.

More snow is coming to the Omaha metro area

Scott Dergan, a meteorologist with the National Weather Service, said an inch or two is expected to fall Tuesday night into Wednesday.

Forecast: Rain-snow mix to linger in Omaha on Wednesday

A day of snow with some rain is forecast for Wednesday.

Drought a bigger threat than flooding along Missouri River

The river's six reservoirs have already dropped to the level considered necessary to be ready for the spring flood season.

Wind gusts of 60 mph reported in Omaha; snow expected to blow around all day

Blizzard conditions were expected to continue in the Omaha area through Friday morning, with heavier snowfall hanging around until about 10 a.m.

It's official: All of Nebraska is in drought for the first time in nearly 8 years

The last time 100% of Nebraska was classified in drought was in April 2013. At that time, the state was beginning to recover from the historic flash drought of 2012.

Of greatest concern Thursday evening was the Platte River near Fremont and the confluence of the Loup and Platte Rivers. The previous advisory there has been elevated to a warning.

One year after derecho, insurance pays $3 billion in claims to Iowans

That number is expected to grow as regulators urge carriers to grant extensions.

Crews battle wildfire in western Nebraska that has grown to more than 2,500 acres

As of Tuesday morning, no structures were known to have been burned, no injuries were reported and no evacuations were necessary from yet another large fire in the Nebraska Panhandle.

From a polar vortex to December tornadoes, Nebraska saw plenty of weird weather in 2021

Nebraska residents got another taste in 2021 of the potent consequences of the state's naturally extreme weather in a climate changed world. Losses easily exceed $60 million. 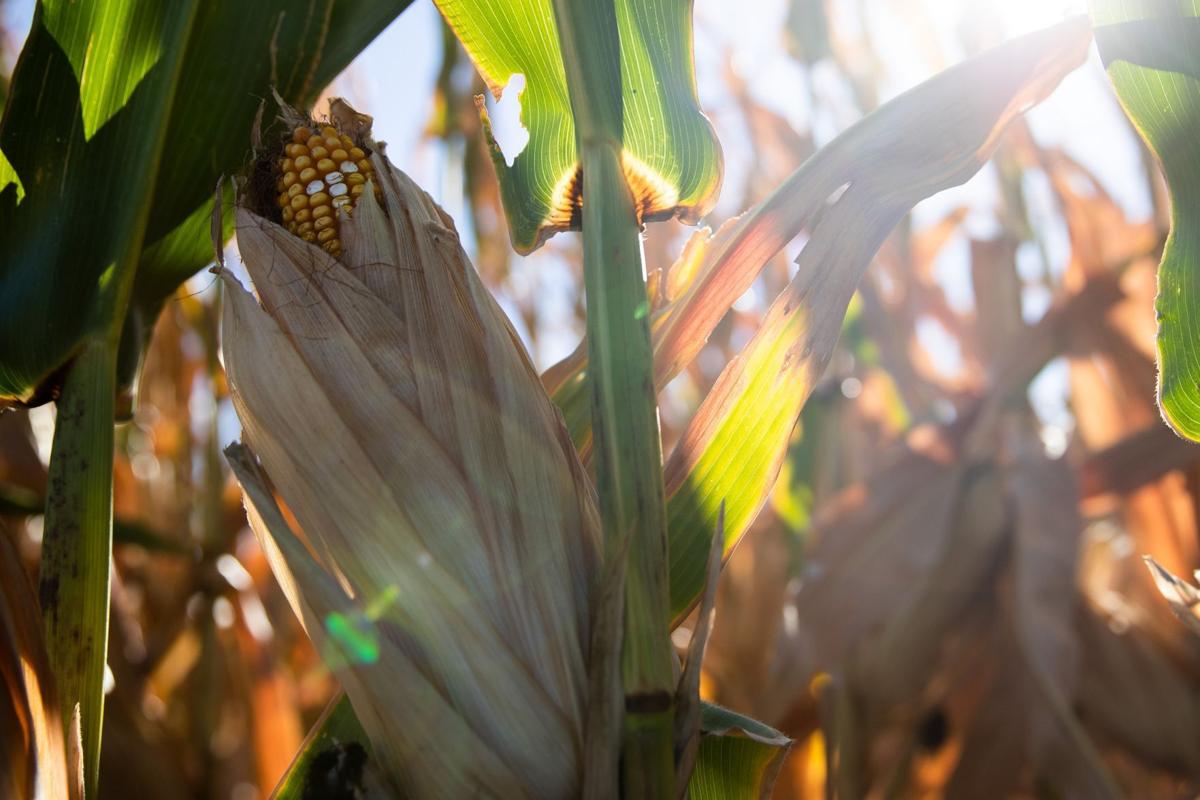 Browning stalks of corn near Winslow, Nebraska, in September.

The Hubbard Gap Fire in the Wildcat Hills south of Scottsbluff injured six firefighters and burned 4,000 acres in late August. The state’s dedicated firefighting plane plus six others were used in firefighting in 2020, compared with two or three in a normal year. But what’s normal is changing. 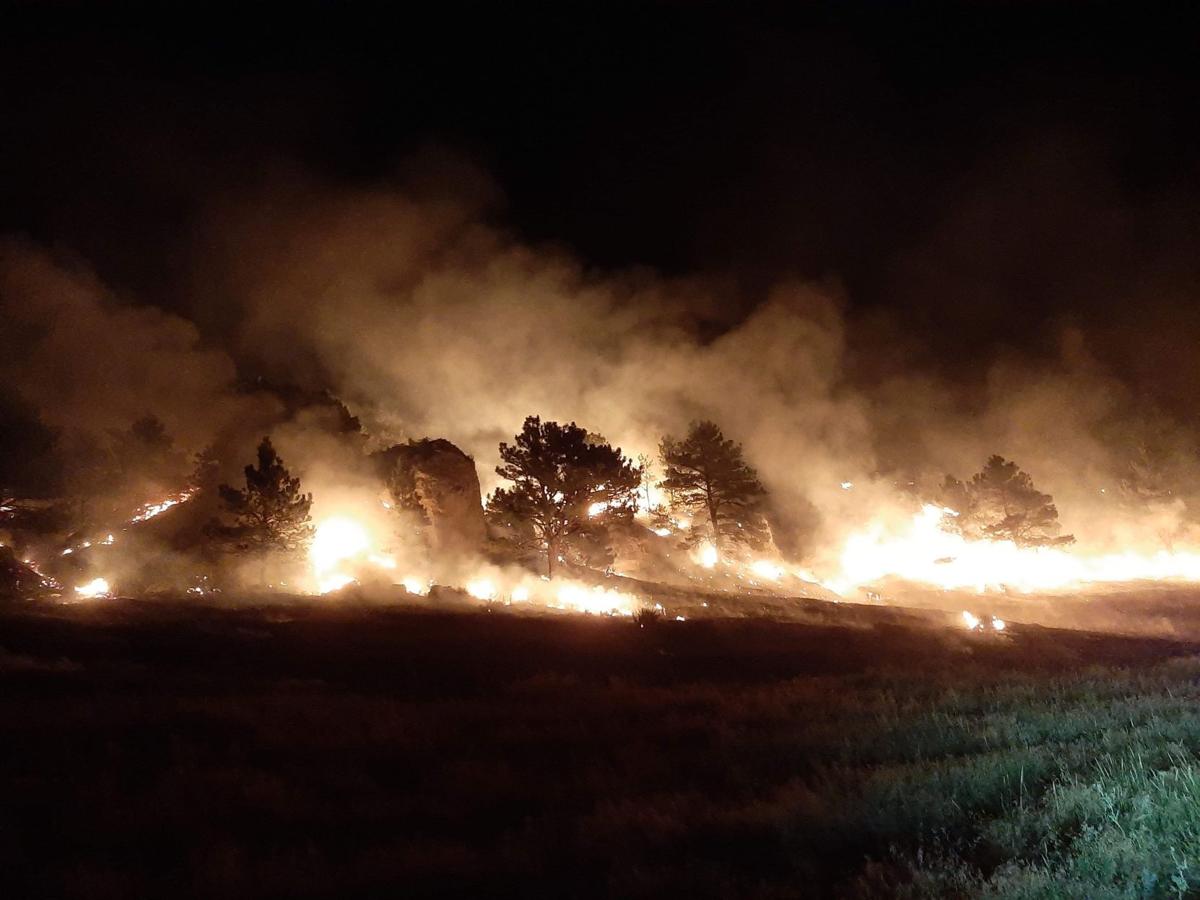 The Hubbard Gap Fire burned nearly 4,000 acres in late August and proved dangerous and difficult to fight. It occurred mostly in the Wildcat Hills south of Scottsbluff, though some of it broke through to the grasslands and cropland along the hills. Firefighters contained it before it could get going in the flats.

A firefighter from a federal agency watches heavy fuels burn through the night inside the fire lines of the Aristocrat Fire near Chadron on Aug. 28.

A landspout near Grant, Nebraska. Over the summer, a cluster of landspouts made for riveting photography.

More than a dozen reports of landspouts were reported in Nebraska and northeastern Colorado on July 8, 2020. No damage was reported. This photo was taken near Thedford, Nebraska, shortly after 8 p.m.