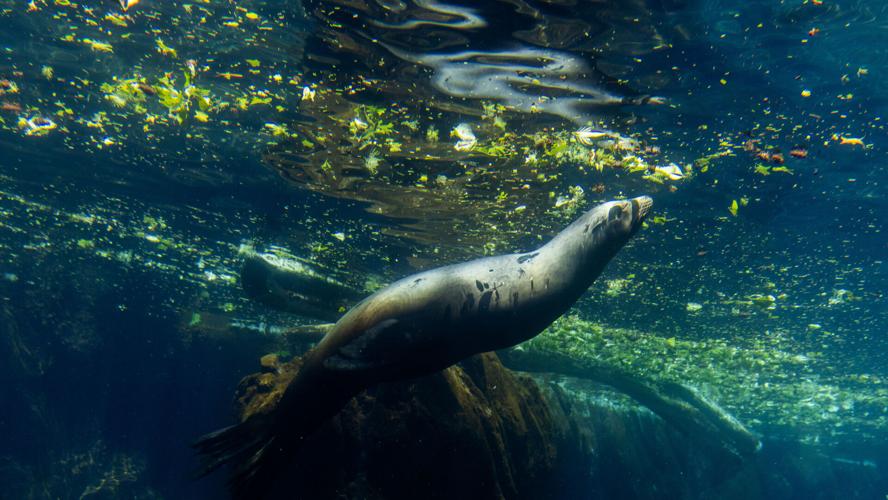 A sea lion at the Henry Doorly Zoo swims under tree debris that washed into the Owen Sea Lion Shores exhibit after Tuesday’s storm. 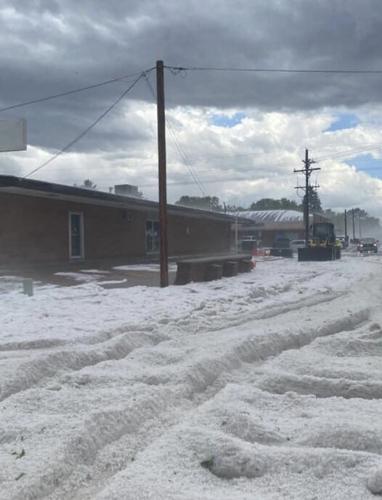 From the Nebraska Panhandle to the Missouri River, from the Sandhills to Kansas, massive storms tracked diagonally across the state, leveling crops, blowing out windows on cars and homes and leaving roofs and cars pitted.

In the Omaha metro area, the hail traveled a fairly narrow, west-to-east path through the central part of the city, largely along Interstate 80, said Paul Johnson, Douglas County Emergency Management director. The hail was generally 1 inch to a little larger in diameter, he said. His office didn’t receive reports of significant damage, and, because of that, the office won’t conduct a damage assessment survey.

Rainfall totals in the metro area varied, but all came in under an inch, said Paul Fajman, meteorologist with the National Weather Service: .36 inches at Eppley Airfield, .85 inches at the Millard Airport and .67 inches at the Council Bluffs Municipal Airport. In Valley, 1.11 inches of rain fell.

The hail contributed to street and basement flooding in Omaha and other communities by filling and blocking sewer inlets. As a result, some videos of central Omaha showed rivers of water gushing down streets and pooling, lake-like, in low areas.

Social media posts from Omaha also showed shredded landscapes, some broken-out windows and pock-marked siding. Some cars got stuck in floodwaters, and some high-centered on piles of hail, both in the metro area and elsewhere in Nebraska.

On westbound Interstate 80 in central Omaha, crews used shovels to clear hail and leaf debris from the highway.

Branches and debris were also down inside Omaha’s Henry Doorly Zoo & Aquarium. The zoo opened for its normal hours as crews reviewed damage and cleaned up messes left by the storm.

“I am sure some of the animals were startled by the storm, like the rest of us, but they don’t mind the debris and ‘messiness’ as much as us humans,” said Dennis Schnurbusch, zoo senior vice president and COO. “To a lot of the animals, the leaves and twigs are considered enrichment and new things to explore.”

If Omahans have large branches that they are looking to get rid of, they can email the zoo’s Browse Department to see what is being accepted at browse@omahazoo.com.

And while the heart of the Omaha metro area sustained damage, parts of Nebraska farther west were much harder hit by hail.

Suffering the worst damage were communities in the path of 60 mph to 70 mph wind-driven hail. Among the communities most affected were Hastings, Ravenna, Shelton, Litchfield and Wood River, according to local emergency managers and National Weather Service meteorologists.

“For the individual person, it’s going to be a tough hit, just to come up with the deductibles,” Lewis said. “But for the people in the (home repair) business, there is plenty of work to be had.”

Lewis said he was dubious Nebraska would be able to qualify for federal disaster aid, but he said the damage surveys will be key.

Federal disaster aid usually hinges on extensive damage to public infrastructure such as roads and bridges, but can apply in cases of widespread damage to private homes and businesses. These storms traveled along defined tracks rather than blanketing the entire state.

For some farmers in central Nebraska, this is at least their third hailstorm in less than a week, said Sarah Sivits, an ag educator with University of Nebraska-Lincoln Extension.

And for some, the problem isn’t just damage to crops. Equipment has been damaged, she said, and winds have tipped over center pivot irrigators, with the latter potentially posing season-long problems because of difficulties getting repairs.

It’s generally too early to tell if crops sustained significant, lasting damage, she said. Corn is young enough that it might bounce back, and soybeans are resilient. Farmers will have a better idea in a week or 10 days whether their crops will bounce back. Insurance and other factors also will affect the options farmers have, she said.

“Some crops we may have lost, others will probably fare fairly well,” she said.

In Hastings, more than one homeowner on Tuesday evening probably had a few choice words to say. The hailstorm followed on the heels of a similarly damaging one in 2019, said Ron Pughs, Adams County Emergency Management director.

“That’s what’s really sad, a lot of people just got their new roofs put on,” he said.

Because the storm was delivering baseball-size hail at 60 to 70 mph, Adams County sounded its outdoor warning sirens, he said.

“Just because there’s not a tornado doesn’t mean a storm can’t be dangerous,” he said. “Always be aware. Strong winds and hail can be hazardous, so it’s not something where you want to go outside. Go to the lowest level of your home and stay away from windows.”

Mangels said the storms were powered by intense supercells. In this type of storm, the air rotates upward, holding hailstones aloft in the freezing upper atmosphere where they are coated and recoated with moisture until they grow so heavy they fall to the ground.

Supercells have the energy to live for a long time, and at least one of these storms traveled 400 miles from the Sandhills to Kansas City, Mangels said. The storm that caused the worst damage probably had its greatest impact for about 250 miles, he said.

More storms are possible Thursday evening, according to the National Weather Service, and while they could be severe, the weather service isn’t expecting them to be as widespread.

After a brief respite Wednesday, expect temperatures to climb back into the 90s and reach the triple digits perhaps this weekend in Omaha.

A sea lion at the Henry Doorly Zoo swims under tree debris that washed into the Owen Sea Lion Shores exhibit after Tuesday’s storm.