Nebraskans have watched severe weather track across the state in waves since May, devastating some areas multiple times.

In Kearney, Realtor Patrick Slack can only shake his head at the damage.

A commercial building was so badly pummeled by hail that the loss was larger than the sale price, Slack said. The roof of a Kearney home was totaled by hail, replaced and totaled by a second hailstorm, all within 10 days, Slack said.

“We’ve had baseball-sized hail, we’ve had tennis ball-sized. We’ve had pea-sized hail that was so hard and rigid that, with 70-mph winds, it caused damage you wouldn’t expect,” said Slack, broker-owner of Century 21 Midlands. “Going back the last three years, it seems like these storms are becoming more common.”

“We’ve been hit pretty hard the last couple of years,” he said. “We can never just catch rain. All it is is severe weather. When it comes through, it destroys everything.”

Farm fields have been leveled, homes have been battered and windows blown out as a series of windstorms and hailstorms moved through.

Like the other weather disasters the state has been experiencing — including explosive wildfires and flooding rains — damaging hailstorms are on the increase in Nebraska and are expected to worsen with climate change, scientists say.

This year’s continuous outbreaks of hail are the result of storms riding into Nebraska along the edge of the heat dome that has been suffocating vast swaths of the country this spring and summer. Meteorologists often describe these storms as a “ring of fire” because they follow along the periphery of the mass of hot air.

By several measures, this has been a rough year.

Gannon Rush, a climatologist with the University of Nebraska-Lincoln, said this has been the second worst June for hail in the last 10 years. The worst was 2014, when baseball-sized hail driven by 90-mph winds tore through communities north and west of Omaha.

Taking a look beyond hail, Rush said the state’s pace of thunderstorms has been well ahead of average.

During the first three weeks of the month, the National Weather Service issued 316 severe storm warnings, about a third more than average over a 20-year period.

Because of the way federal rules are written and because the damage is largely private and insured, Nebraska won’t qualify for a federal disaster declaration, he said.

American Family Insurance, a major insurer in Nebraska, has received 6,200 claims for wind and hail damage this year, with about 4,000 coming in June, said spokesman Ken Muth.

The company assigned catastrophe status to Nebraska this year, which means it has brought in outside help to process claims, Muth said.

To speed the claims process for vehicles this year, American Family set up drive-through inspection sites in several communities, including at an Omaha Menards.

While storm damage does affect insurance rates, no single year does, Muth said. Instead, the company bases rates on a 20- to 30-year average. The recent sharp increases in insurance rates are due to the rising cost of building materials, car parts, replacement cars and labor, he said.

The two Buffalo County towns of Ravenna and Shelton, with a combined population of about 2,700, saw 90% to 100% of their homes significantly damaged, he said.

Nebraska can get hail any month of the year, but most hailstorms occur from May through July, with June the peak month, according to the weather service.

This year’s outbreak of hailstorms started in late May, with the worst damage concentrated over an 11-day period in early June.

On seven of those 11 days, significant hailstorms occurred somewhere in the state, from the Panhandle to Omaha, according to the U.S. Storm Prediction Center.

“A heck of a couple of weeks,” is how National Weather Service meteorologist Mike Moritz described it. He and others point to the night of June 14 as the worst, when a succession of supercell thunderstorms swept across southern and central Nebraska, dropping hail.

“If you saw one hailstorm, you saw two, you saw three,” he said.

The storms left about a 90-mile-long, 6-mile-wide damage path, he said. Along the way, Hastings, Kenesaw, Henderson, Giltner, York, Waco and Utica were among the communities most affected. Making the damage worse was the strength of the winds. In some areas, winds reached more than 100 mph, he said.

Among the largest known hailstones to fall with this year’s storms was one that measured 6 inches wide, said National Weather Service meteorologist Shawn Jacobs. It fell near the Calamus Reservoir, in north-central Nebraska. While that’s not a record for the state, it’s among the largest. (The record is 7 inches wide at Aurora in 2003.)

In terms of agriculture, the good news is the hail fell early enough that some corn is recovering, said Al Dutcher, Nebraska’s associate state climatologist. But damage to crops could invite disease and reduce yields, some irrigation equipment is inoperable for the season, expenses are mounting as some farmers replant, and some producers worry about whether they’ll be able to meet contractual obligations for their harvest, he said. As a result, some University of Nebraska-Lincoln Extension personnel say they are concerned about the mental health impacts on farmers.

Harold Brooks, a senior scientist at the National Severe Storms Laboratory, said research shows that climate change is expected to bring an increase in large hail at the same time that smaller hail occurs less frequently. The reason has to do with how a warmer atmosphere affects hail.

The added warmth and moisture that climate change is injecting into the atmosphere is feeding more energy into storms, he said. As a result, storms have more powerful updrafts, which are the key to keeping hailstones aloft long enough to become large. That’s why large hail is expected to become more common, he said.

Based on research in China, where there is a longer record of hail data, and Europe, the occurrence of small hail is declining, Brooks said. This appears to be because the atmosphere near the ground is warming, while the level at which hail freezes is shifting higher. As a result, small stones have more time to melt away before they reach the earth.

Part of this also has to do with the fact that small hail falls more slowly than large hail. Hail that is about an inch in diameter falls to the earth at 15 to 20 mph, while baseball-sized hail falls at about 100 mph (the speed of a top-end major league fastball), he said.

Western Nebraska is in that part of the U.S. that has seen an increase in large hail over about the last 20 years, Brooks said. Farther east toward Omaha, the data is not as clear, he said.

“Over the next decades, the hail threat will probably become larger,” Brooks said.

A year like 2022 won’t necessarily become typical, he said.

“There will still be lots of variability,” he said. “This year has been unusual.”

Slack said unrepaired storm damage to a home can complicate a sale, something he’s seeing more often. For this reason, he advises people to take their insurance — and repairs — seriously, rather than pocketing the cash from a claim.

“It’s a conversation nobody wants to have, but it’s imperative that you have it,” he said.

The price tag of hailstorms is climbing as they occur in more populous areas of the U.S., triggering a call for more research and more resilie… 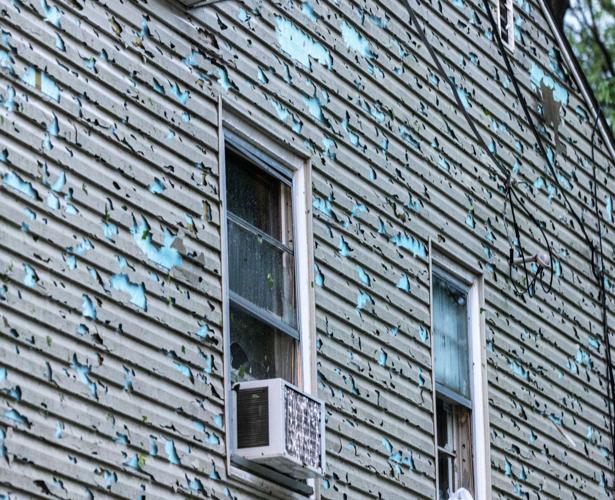 Hail from the June 7 storm peppered the side of a house near 40th and Valley Streets. 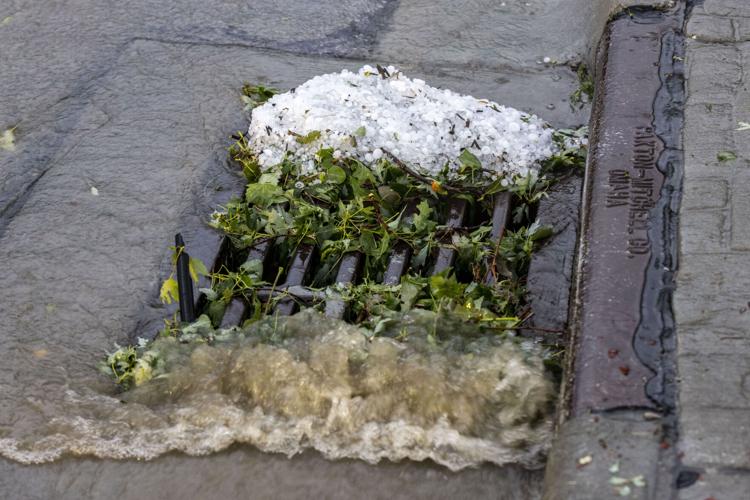 Leaves and hail clogged storm drains after a storm. 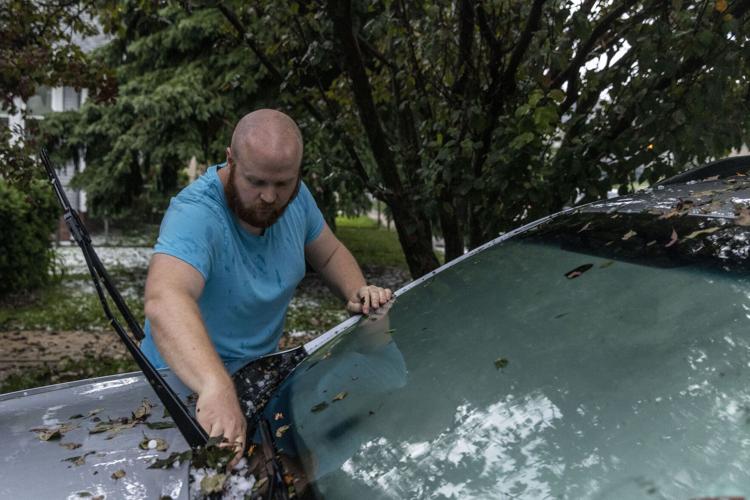 Matthew Brown cleans hail and tree debris off his vehicle after a June storm. No official estimate is available, but it’s likely this year’s storms have caused tens of millions in damage. 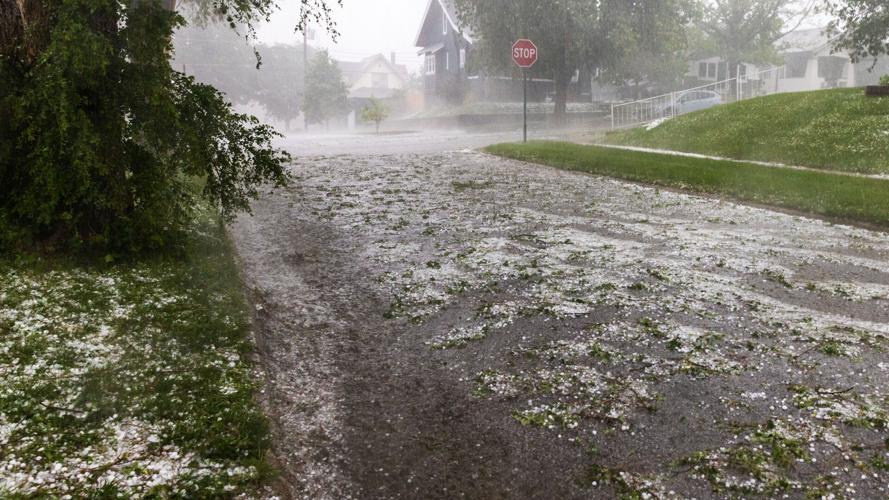 Hail from a June 7 storm covers a street in midtown Omaha. A University of Nebraska-Lincoln climatologist said this has been the second-worst June for hail in the last 10 years.