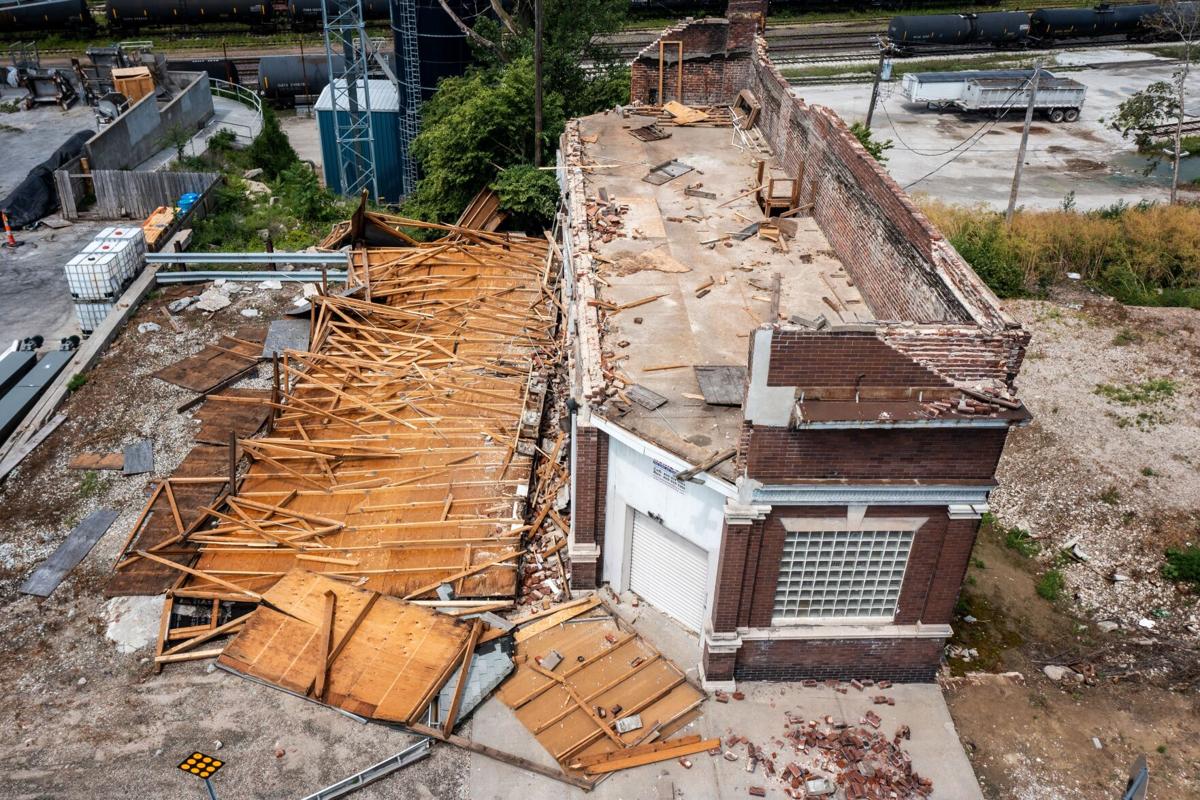 The top of a structure blew off at 2602 O Street in Omaha during an overnight storm Saturday. 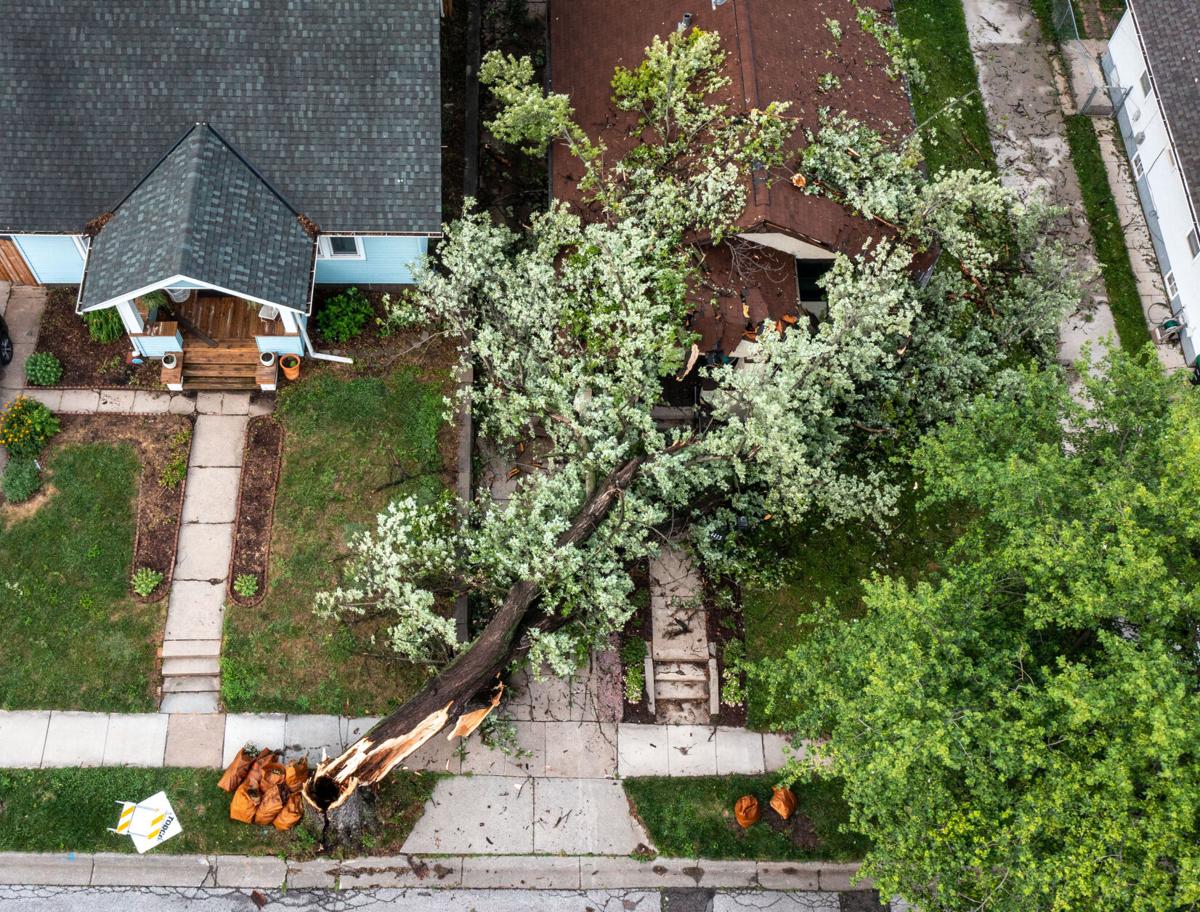 A tree fell on a house near 45th and Mayberry Streets after an overnight storm on July 10. 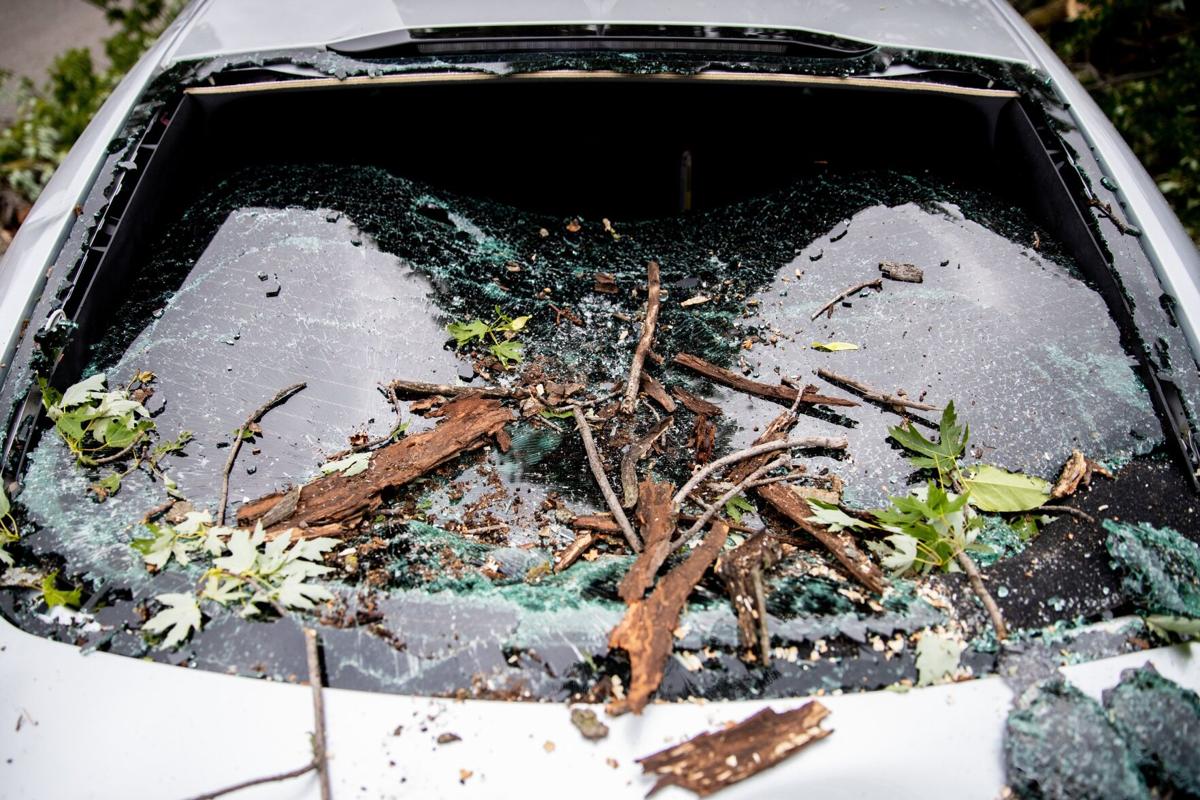 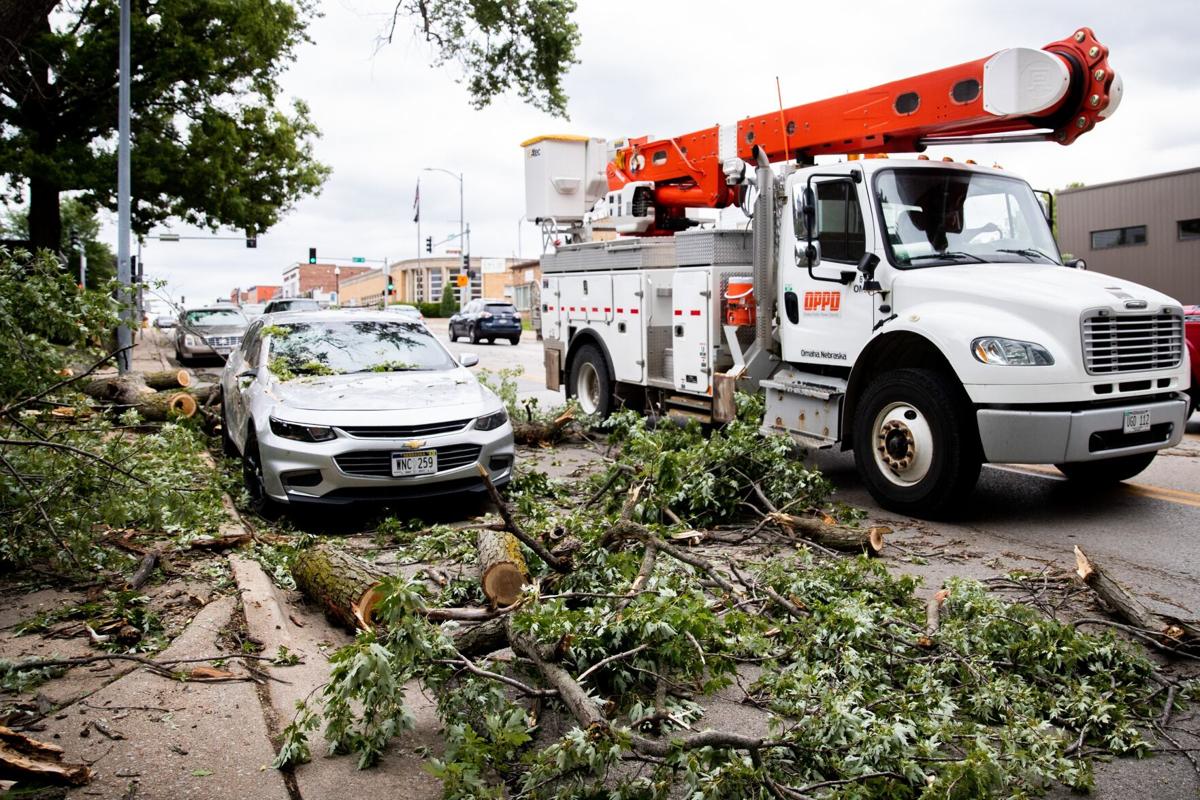 An Omaha Public Power District vehicle drives past a car damaged by a fallen tree near 63rd and Maple Streets on July 10. The storm knocked out power to 188,000 homes and businesses, OPPD’s biggest outage in history. But the effort to restore power was also OPPD’s most aggressive and best-coordinated restoration, CEO Javier Fernandez said. 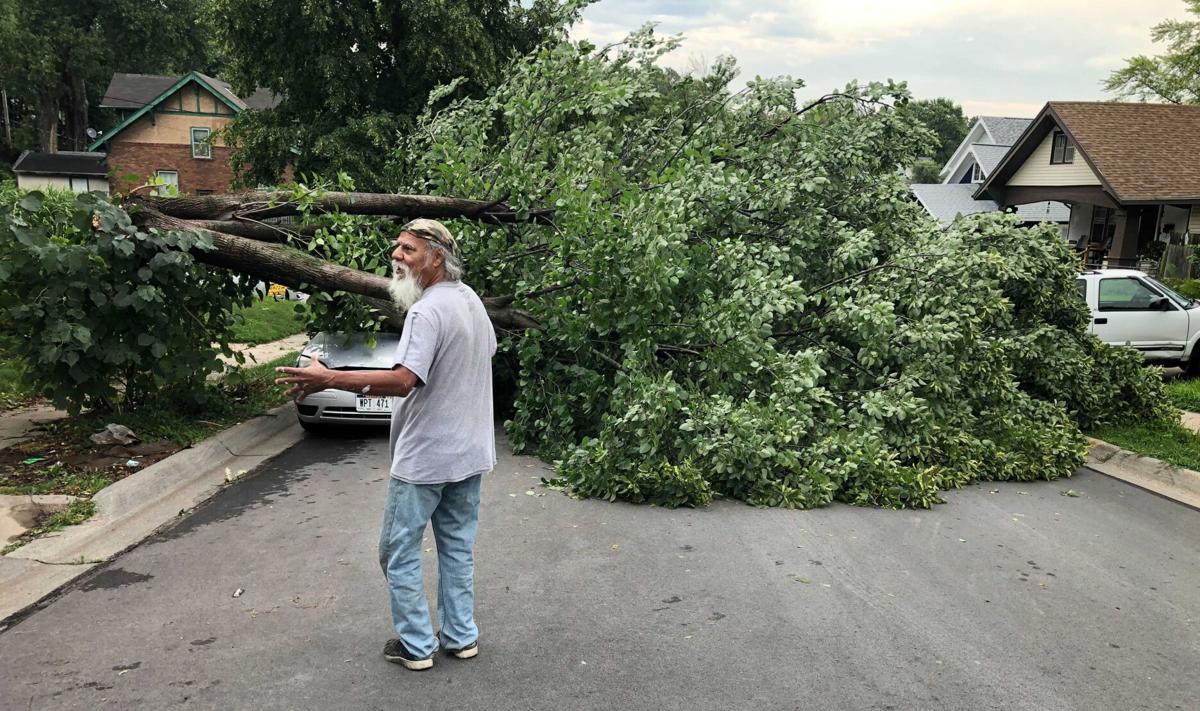 A tree landed on a car near 31st Street and Lafayette Avenue during the storm. 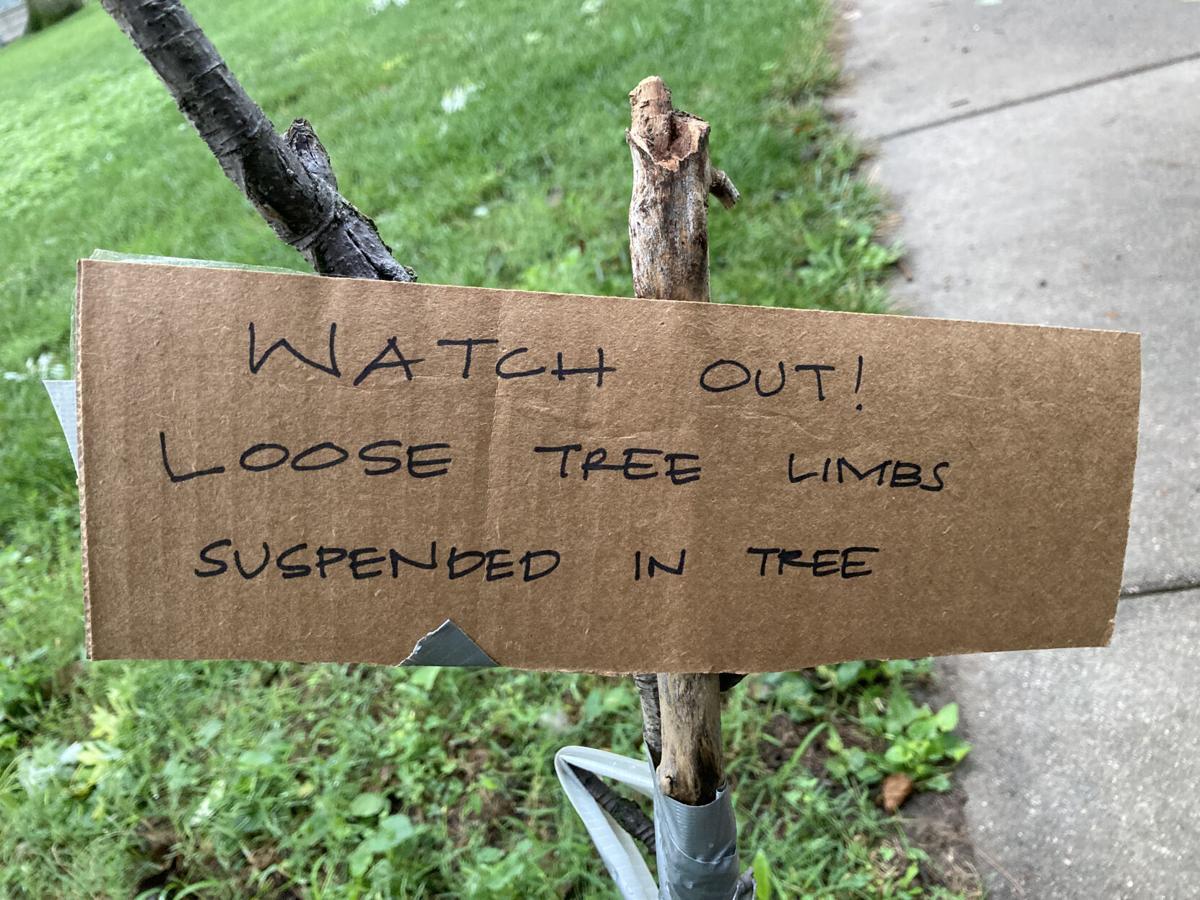 This warning sign was posted on city property near 138th and Pierce Streets.

Tens of thousands of customers remained without electricity Saturday night amid assurances from the region’s power provider that two-thirds of the nearly 190,000 customers who experienced outages would have power restored by early Sunday morning. But it could take days to fully recover from one of the most damaging storms in recent history.

The Omaha Public Power District reported shortly after 8 p.m. that 83,807 customers remained without power — down from a peak of about 188,000 early Saturday morning. The power outages in OPPD’s 13-county service area were concentrated in Douglas and Sarpy Counties.

OPPD CEO Javier Fernandez called Saturday’s outage “one of the largest events we’ve had in our history.”

“There’s infrastructure that needs to be restored, and it’s all over the territory,” he said during a Saturday afternoon update. “Many challenges are ahead.”

Crews will work around the clock to restore power to the approximately 62,000 customers likely to still be experiencing an outage for at least another day.

OPPD is prioritizing areas with the highest density of customers, Fernandez said, with critical locations like hospitals and water treatment plants taking priority.

A storm that blew through the metro area Saturday afternoon added about 3,000 more outages, but as crews restored power elsewhere, the total number of outages didn’t increase by much.

Fernandez noted that overnight wind gusts of more than 90 mph were detected Saturday, classifying them as hurricane force.

Easy to see why we had so much damage around the area with wind speeds like these.

FYI, we're still working on verifying the max wind gust at the Omaha Airport, as we had some data errors as the storm went through. pic.twitter.com/XguGMVJms6

OPPD said all of its crews were being dispatched on calls Saturday. Additionally, OPPD’s utility partners from within Nebraska and as far as the East Coast proactively offered their services.

“We are public power, and we support each other. ... It has been amazing to see the response from all those utilities who have been able to respond,” Fernandez said.

OPPD said the Saturday morning storm was one of the most severe in recent history. For comparison, the Father’s Day tornado in 2017 caused about 75,000 outages — less than half of the initial outages reported Saturday.

The damage was widespread.

At 55th and Farnam Streets, Steve and Nancy Johnson worked to clear a large cottonwood branch that had dropped in their driveway and onto their neighbor’s fence.

“It was my neighbor’s fence,“ Steve Johnson said. “I’ll say it in the past tense.”

Like most others in the neighborhood Saturday morning, they were without power. As they worked, a neighbor stopped by to deliver them coffee from a midtown business that had power — one of the few in the area that was fortunate to maintain services.

The lights were on at the Bruegger’s Bagels near 42nd and Dodge Streets. Manager Jesse Johnston said the business had been “insanely busy” since 7 a.m. He estimated they had made about 1,000 bagels since that time.

“I could use more bodies,” he said of his staff, which had been dealing with a never-shrinking line.

Downed branches blocked streets throughout the city, particularly in areas with many older trees. At 65th Street, all but one lane of Dodge Street was blocked by a large fallen tree. Dodge was completely closed near Memorial Park because of downed power lines.

Mary McHale, who was out on a morning walk, said that from what she could see, much of Dundee and Benson were without power.

She expressed concern for residents of Underwood Tower, noting that the elderly residents wouldn’t have functional elevators or air conditioning.

OPPD advised people who need electricity for medical care to make arrangements with friends or family who have power.

“If you have an emergency medical issue that needs electricity, please go to the hospital or call 911,” OPPD said.

In Bennington, neighbor helped neighbor clean up after the storm.

Near 156th Avenue, Josh Dowding was cutting up a tree limb that collapsed onto a neighbor’s property. As he did so, people helped city crews clear branches from the streets and residential properties.

The City of Bennington opened a dump site by Tim Ohrt Park.

“We’re blessed to have good neighbors who help and take care of each other,” Dowding said.

Bennington was one of the first towns in the metro area to be hit by the storms as they moved east through the region. Dowding said the first storm rolled in shortly before 12:30 a.m.

“By the time we turned on the news, we were already in the heart of it,” he said.

Van Mohr was helping his daughter, Mallory, clean up some downed tree limbs from her property. Along with neighbor Cindy Buhl and Old Bennington resident Brett Hiscock, Mohr reported no structural damage.

“It was just tree limbs down,” he said.

For Buhl, the storm was the final nail in the coffin for an approximately 40-year-old tree that lost two substantial branches to straight-line winds two years ago. Buhl said she contacted her nephew’s friend to remove the tree.

Just before noon Saturday, Hiscock, along with his wife, Julie, and son Bart, had just finished cutting up a long ash tree limb measuring more than 18 inches in diameter in his yard.

“Fortunately, it missed the house and the car that was parked on the street,” he said. “The tree limb fell right in between them.”

No injuries were reported in the aftermath of the storms Saturday morning, according to Clint Aegerter, a meteorologist with National Weather Service.

The Omaha Police Department advised people to stay away from any downed wires and trees.

Residents should consider all downed power lines to be live and report them to OPPD either at OPPD.com or at 800-554-6773.

The damage, which occurred about 12:50 a.m. Saturday, briefly caused untreated wastewater to be discharged into the Missouri River at several locations. But just after 9 a.m., the Mayor’s Office reported that the wastewater treatment plant was back online.

Tips for after the storm: food storage, debris and more

Power outages were not limited to the metro area.

The Nebraska Public Power District reported Saturday morning that it had roughly 8,800 customers across the state without power. That number was down to about 757 customers by 3:30 p.m. Saturday.

About 111 customers in Kearney were still without power Saturday afternoon, and crews from Plattsmouth and South Sioux City were working to restore power to roughly 550 customers in Plattsmouth.

NPPD said some customers might be without power until Sunday.

Interstate 80 fully reopened near the Aurora exit Saturday afternoon. Traffic had slowed to a crawl on I-80 and Nebraska Highway 14 on Saturday morning because of fallen transmission lines. The disruption contributed to a large traffic backup.

NPPD said crews patrolled county roads between Grand Island and McCool Junction — an area that saw heavy damage from the storm — and removed transmission lines on those roadways.

A 345-kilovolt transmission line between Grand Island and McCool Junction was seriously damaged, with 84 structures broken or on the ground, according to NPPD. Restoration work on the transmission line will begin Monday.

Tips for after the storm. Page A6

The top of a structure blew off at 2602 O Street in Omaha during an overnight storm Saturday.

A tree fell on a house near 45th and Mayberry Streets after an overnight storm on July 10.

An Omaha Public Power District vehicle drives past a car damaged by a fallen tree near 63rd and Maple Streets on July 10. The storm knocked out power to 188,000 homes and businesses, OPPD’s biggest outage in history. But the effort to restore power was also OPPD’s most aggressive and best-coordinated restoration, CEO Javier Fernandez said.

A tree landed on a car near 31st Street and Lafayette Avenue during the storm.

This warning sign was posted on city property near 138th and Pierce Streets.