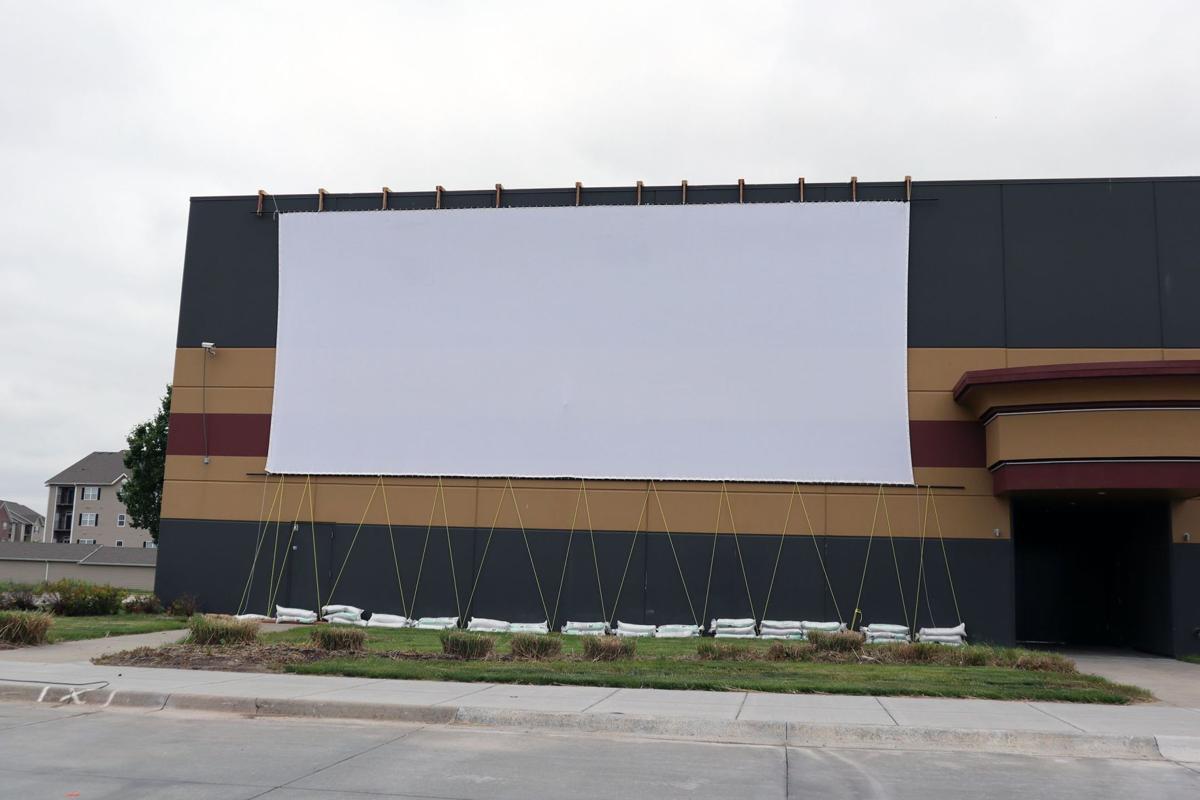 Marcus Twin Creek Cinema will be open this weekend with its new parking lot cinema. Friday through Monday, the theater will show "E.T." starting at around 9 p.m. at sundown, followed by "Jurassic Park" after a brief intermission. Tickets are available for purchase online. 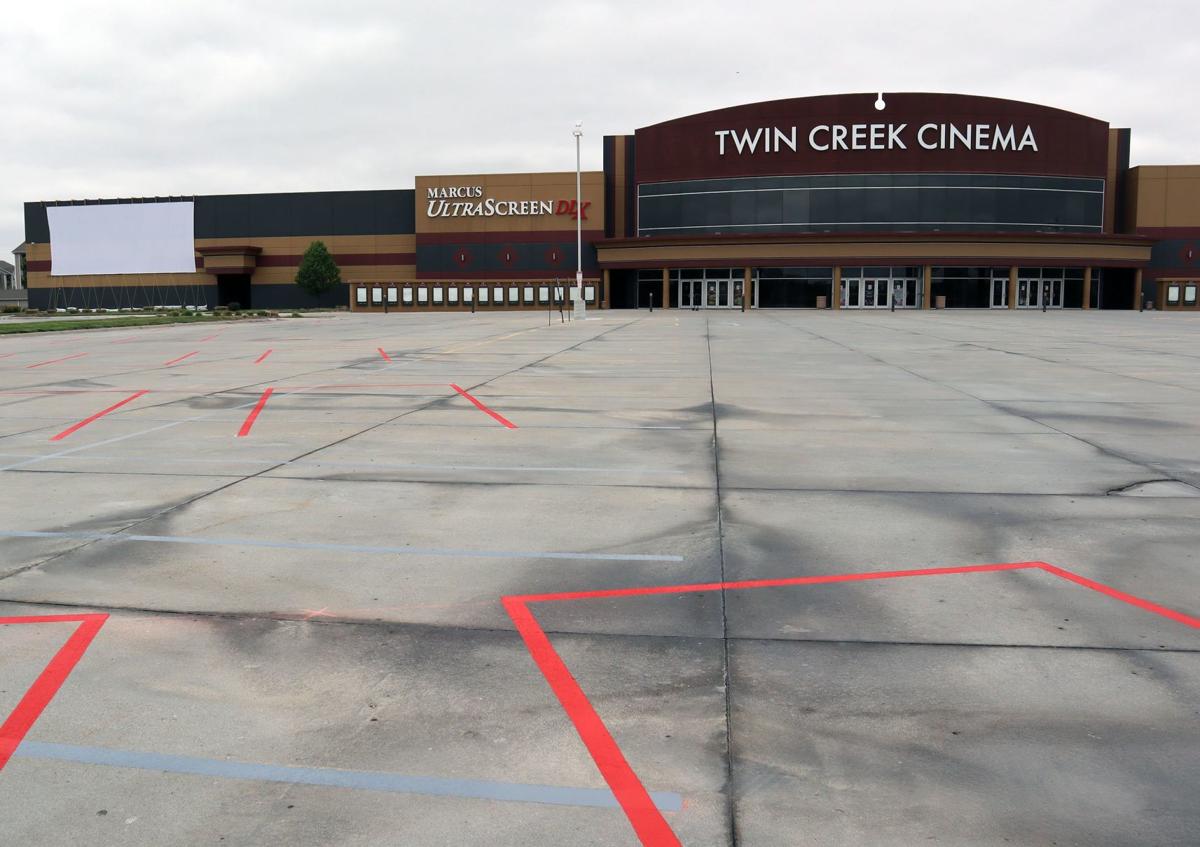 Marcus Twin Creek Cinema will be open this weekend with its new parking lot cinema. Staff marked off spots for vehicles to park.

This story has been updated Thursday at 11:15 a.m. with the latest information.

Out of Marcus Theatres’ 90 locations across the country, the Bellevue theater is the only one to implement a parking lot cinema, said Mari Randa, director of communications for Marcus Theatres. If it goes well, Randa said it could be the first of many among its theaters.

With coronavirus regulations having shut down local movie theaters, Randa said Marcus Theatres wanted to find a way to keep showing movies to the community and keep staff employed.

“We have several loyalty members saying they can't wait to get back to the movies,” Randa said. “The drive-in experience is something that would be providing comfort that they can get out of the house and go see a movie in the privacy of their own car.”

The outdoor cinema at 3909 Raynor Parkway will feature a 42-foot screen from Strong Technical Services in Omaha, according to a May 19 news release from Marcus Theatres. There’s enough spots for 120 cars.

The first show in the weekly summer series premieres Friday and will be played each night through Monday. All movie nights in the series will feature two films.

This week, “E.T.” and “Jurassic Park” will be shown, according to the Marcus Theatres website. Next week’s will feature “Grease” and “Raiders of the Lost Ark.”

Staff have been preparing for the crowd, Randa said, by marking off specific parking spots with a clear line of sight. On the night of the shows, staff will direct viewers where to go, with a designated area for big vehicles.

Patrons can watch from inside their cars, from their truck beds or in chairs in front of their vehicles.

Gates open at 7:30 p.m., according to the news release. The first movie will start at sundown, around 9 p.m. Following a 15- minute intermission, the second will be played.

Since the tickets have sold so fast, Randa said the shows will be played every day of the week after this weekend. Movies will change on Wednesdays.

Those attending should tune into 89.1 F.M. with a portable radio, according to the release. It also said the building’s lights will be turned down to make the ambiance as authentic to an indoor theater as possible.

Orders must be submitted on the Marcus Theatres app or website and can be called in. When ready, it can be picked up at a table placed outside the cinema’s front doors.

Those needing to take a bathroom break can do so indoors at the theater, the website states, but if restrooms reach capacity guests will need to wait outside.

Hand sanitizers will be placed outside the building, which Randa said is encouraged for those using the bathroom or ordering food.

Tickets are $20 per carload, the release states, and must be purchased online at marcustheatres.com or through the Marcus Theatres app. According to the website, there will be no rainouts, but the theater will issue refunds for lightning, fog or a disruption in service.

Randa said staff is being trained on proper cleaning protocols and are maintaining social distancing. According to its website, the theater will provide a refund to anyone feeling sick so that they don’t attend.

Depending on the community’s reaction to the parking lot cinema, Randa said Marcus Theatres may expand this concept to other theaters, as well as possibly keep this going post-pandemic.

Bellevue-area movie lovers should clear a few hours out of their schedules later this month.

Sarpy County took another major step forward today with its plans to build a modern correctional center on the Sarpy County Campus, according …

Bellevue woman gets prison time for role in attack on roommate

Angela N. Cuckler, 28, was sentenced to one year in prison for attempted murder and one year for conspiracy to commit murder.

Gross to open Aug. 11 for back-to-school

Gross Catholic High School will be returning to a “new normal” beginning Aug. 11.

The Sarpy/Cass Health Department reported its eighth COVID-19 related death in Sarpy County on Friday. Between the two counties, that is the 1…

Marcus Twin Creek Cinema will be open this weekend with its new parking lot cinema. Friday through Monday, the theater will show "E.T." starting at around 9 p.m. at sundown, followed by "Jurassic Park" after a brief intermission. Tickets are available for purchase online.

Marcus Twin Creek Cinema will be open this weekend with its new parking lot cinema. Staff marked off spots for vehicles to park.