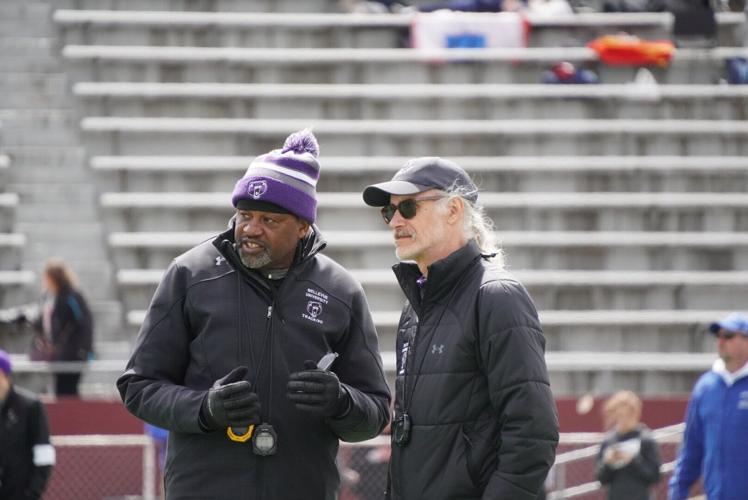 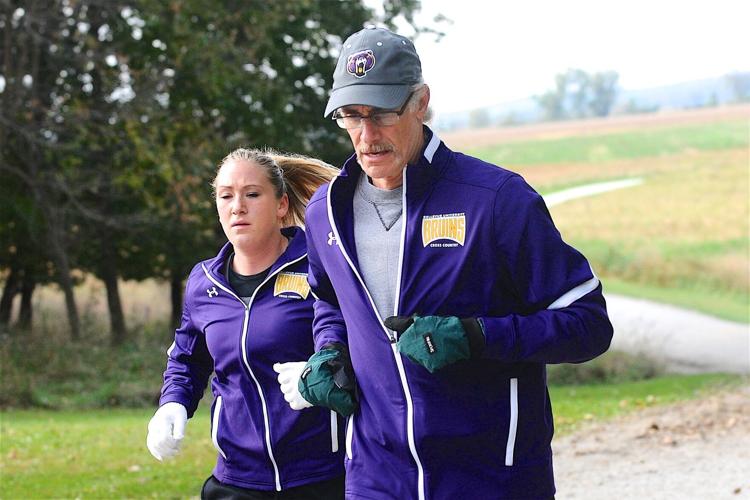 The stories José Luíz Barbosa can tell are nearly endless.

The 62-year-old Brazilian is a four-time Olympian and one-time World Indoor champion who now coaches track and cross country at Bellevue University.

“It’s very nice to share my knowledge and also I have learned a lot from (head) coach (Craig) Christians as well here. So it’s a two way street,” Barbosa said.

Christians said he was surprised when Barbosa responded to a “help wanted” ad, and wasn’t sure if it was genuine at first.

“So I kind of had to check it out a little bit,” the Bruins head coach said. “But just talking to him the first time I could feel the passion over the phone for what he’s doing and he has demonstrated that every step of the way.”

The dynamic between the two coaches — calm Christians and energetic Barbosa — has created a compliment for the Bellevue University track and cross country program.

“I’ve never seen a guy get so excited at practice, as Jose has and so I can just feel that enthusiasm and passion,” Christians said. “And you couple that with his knowledge and his world class experience.”

Christians added that Barbosa’s expertise helps in a “variety of skills” for the Bruins, including weight training, massage and therapy.

Barbosa has a degree in physical education and a certification in strength training and conditioning for world-class athletes from Centro Universitário das Faculdades Metropolitanas Unidas in São Paulo, Brazil.

The certification focuses on “endurance and stamina training, interval training, flexibility improvement, aerobic and anaerobic improvement, mental focus improvement, and enhanced bio-mechanics,” according to Barbosa’s bio from his time at UC-Davis.

But while they aren’t the same in their coaching styles emotionally, philosophically they “couldn’t be more on the same page.”

“We’re about a month apart in age, I’m older,” Christians said. “We just have a shared experience in running despite the fact that he competed at a world class level and I competed just locally, and nationally a little bit.”

The two 62-year-old coaches also realized they had much in common because of their age, gravitating to the same music and watching the same athletes, though Barbosa often competed against those athletes that Christians looked up to.

At Barbosa’s first Olympics in Los Angeles 1984, he developed connections he still has to this day, including nine-time Olympic gold medalist Carl Lewis and two-time gold medalist Sebastian Coe, president of World Athletics and until this year a member of the United Kingdom’s House of Lords.

Barbosa said he texts both regularly. But the memory Barbosa mentioned from those Olympics, in which he finished 15th in the 800-meter semifinals (fellow Brazilian and friend Joaquim Cruz went on to win gold) was in the Olympic Village cafeteria.

Barbosa remembers taking a picture with fellow Olympians and having the ‘84 United States men’s basketball team members, including a couple of college guys just out of Georgetown and North Carolina. Those guys were, of course, Patrick Ewing and Michael Jordan.

Between those Olympics and the ‘88 Summer Games in Seoul, South Korea, Barbosa won the gold in the 800 at the 1987 World Indoor Championships in Indianapolis.

Another gold, however, stands out for being the moment that changed Barbosa’s career.

In 1983, two years after winning gold in the South American Championships in La Paz, Bolivia, Barbosa won gold at the Brazil National Championships with a time of 1:44.3 that was then the fastest time in the world.

“My life changed 180 degrees,” Barbosa said. “I came from a different situation in Brazil to the United States. I came from extreme difficulties, to here in the U.S. with all the infrastructure from the University of Oregon, coaching and everything. I think that set the tone for me to really continue (running), I think I would not have completed the rest of it, but I did because I had my mind set on that.”

Barbosa achieved his highest Olympic finish, fourth place, in the 800 in Barcelona in 1992.

First-place finishes also came at the 1986 Grand Prix Circuit of Athletes in Italy and both the 1995 Pan-American Games and Ibero-American Games.

Barbosa began his coaching career after his retirement in 2000 by being the personal conditioning coach for NBA player Leandro Barbosa (no relation) from 2008-10.

In December 2021, Barbosa took the job at Bellevue University, bringing knowledge from his career that “should be passed on.”

“Throughout my life, I have had people help me. I think we all need help,” Barbosa said. “That’s why I tell the athletes here the name of this country is the United States. When I asked the meaning of the word united, they said ‘all together.’ I said, no, you gotta go deeper than that. I tell them, alone you are strong, together you are unbeatable.”

Barbosa added he has learned a lot from Christians’ patience and generosity, and from the athletes he coaches hard work and how they approach workouts.

For Christians, Barbosa has “raised the bar” in just one year for the Bruins.

“He’s raised the bar for me, definitely,” Christians said. “I came from a long high school coaching career, I was at Bellevue West for 25 years. You kind of coach to your athletes’ level, and coach Barbosa has raised that bar and put higher expectations on people.”

Christians said that while complacent wouldn’t be the word to describe his expectations for Bruin athletes, he expected them to just do “the best they can.”

“(Barbosa) can hold all of us, the athletes and me as the coach, to a higher standard, and that doesn’t do anything except propel our program forward,” Christians said.

The Bruins head coach also admitted that being able to train under the instruction of a four-time Olympian and a World Champion is also a valuable tool in recruiting.

“But he brings all the other characteristics as I talked about, the passion, the enthusiasm, the knowledge, that have just been so impressive to me,” Christians said. “So it’s been a great experience for me to have him by my side.”

BASKETBALL: Previewing the season ahead for the Gretna Dragons

While Gretna boys basketball returns a lot of production from a state semifinalist team, the girls bring in a new head coach replacing a coach…

Papillion-La Vista aims to return to a top four finish at state, while Platteview and Papio South aspire for growth and improvement.

With a two-time state medalist returning, Bellevue West is confident ahead of the season as Bellevue East aims for a winning season.

BOYS BASKETBALL: Previewing the season ahead as Platteview aims to compete for title

Last year, Platteview made the Class B state semifinals, while Papillion-La Vista South came one game short of state and Papio regressed.

FOOTBALL: 'One last ride' as a one-team town for Gretna in Class A final

When Gretna takes on Omaha Westside in Monday’s Class A football state championship game, it will be the last time they play as a town unified…

Papillion-La Vista swimming and diving had a strong finish last season, with several qualifying for state. The co-op aims to build on that suc…

Omaha Gross will play in their first state championship in a decade on Tuesday against Bennington, thanks in large part to a much-improved o-line.